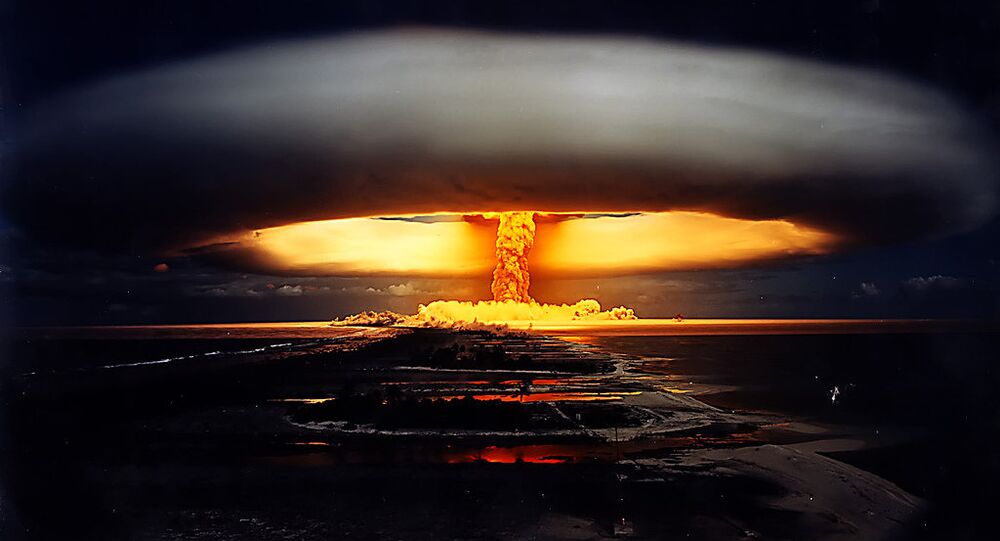 A new and more comprehensive model of the processes that play out when two asteroids collide suggests that it’s actually a lot harder to blow up big rocks than previously believed. While cracking them is easy, overcoming gravity in the long term is another thing. However, humanity also has other options for redirecting deadly space rocks.

A study by Johns Hopkins University's Department of Mechanical Engineering has examined the physics of asteroid collisions with more detail than ever before. While their findings, which will be published March 15 in the planetary science journal Icarus, show that the initial impact does indeed spread cracks far and wide, in the longer term, gravity is still able to pull the pieces of the rock back together again.

"Our question was, how much energy does it take to actually destroy an asteroid and break it into pieces?" said Charles El Mir, a recent doctoral graduate from JHU and the paper's first author, according to a Monday press release.

"We used to believe that the larger the object, the more easily it would break, because bigger objects are more likely to have flaws," El Mir said. "Our findings, however, show that asteroids are stronger than we used to think and require more energy to be completely shattered."

Their work received funding from the Solar System Exploration Research Virtual Institute run by NASA, the US federal space agency.

El Mir and his colleagues, K.T. Ramesh, director of the Hopkins Extreme Materials Institute, and Derek Richardson, professor of astronomy at the University of Maryland, created a two-tier program that tests both the moment of impact but also longer processes. Videos released by the university show animations of the two phases of the test.

"In the first phase, after the asteroid was hit, millions of cracks formed and rippled throughout the asteroid, parts of the asteroid flowed like sand, and a crater was created," the release says. This was more or less how they expected things to go, and reflected earlier models as well as popular belief, thanks to films like "Armageddon" and "Deep Impact," both of which depict humans averting catastrophe by using nuclear weapons to annihilate an incoming space rock.

However, phase two showed something unexpected: the core stayed together, and its gravity pulled most of the blasted pieces of the rock back together again instead of them scattering into space.

"The new model showed that the entire asteroid is not broken by the impact, unlike what was previously thought. Instead, the impacted asteroid had a large, damaged core that then exerted a strong gravitational pull on the fragments in the second phase of the simulation," the statement says.

"The research team found that the end result of the impact was not just a ‘rubble pile' — a collection of weak fragments loosely held together by gravity. Instead, the impacted asteroid retained significant strength because it had not cracked completely, indicating that more energy would be needed to destroy asteroids."

With that hope blasted to smithereens, it now falls to Earth's best and brightest to come up with better ideas for saving Earth from space rocks threatening to send us the way of the dinosaurs. Fortunately, NASA and the European Space Agency have already widened their gaze.

Don't worry, it may not be Bruce Willis with a nuke, but it's still really cool.

Since 2017, NASA has been working with JHU on the Double Asteroid Redirection Test (DART) program, in which the space agency will effectively fling two refrigerator-sized spacecraft at a nearby asteroid at 3.7 miles per second to test just how easy it is to deflect a space rock with brute force.

"DART would be NASA's first mission to demonstrate what's known as the kinetic impactor technique — striking the asteroid to shift its orbit — to defend against a potential future asteroid impact," said NASA's Planetary Defense Officer Lindley Johnson at the time, Sputnik reported.

With the spacecraft scheduled to depart Earth in 2021 for a 2022 test on the asteroid Didymos B, NASA announced last month it was ready for the test.

Presently under construction in Chile is the Large Synoptic Survey Telescope (LSST), also expected to be fully operational in 2022, which will use the world's largest digital camera to systematically map the night sky, searching for all near-Earth objects bigger than 140 meters across, Sputnik reported.

LSST will play into a much larger effort to spot and either stop or avoid destructive impactors. In June 2018, the US National Science and Technology Council released a report detailing a "National Near-Earth Object Preparedness Strategy and Action Plan" that would coordinate efforts by NASA, other federal emergency agencies, the military and the White House to prevent asteroid collisions with Earth and minimize casualties for impacts that cannot be stopped.

Johnson noted at the time that scientists have already found about 95 percent of all near-Earth objects with a diameter larger than one kilometer. The agency has catalogued over 18,000 objects of various sizes.

The planetary defense officer said that it would require years of planning and preparation for any such scenario, estimating that it would take 10 years' notice to stop an asteroid or comet, but less time if it was possible to identify impact areas for evacuation.