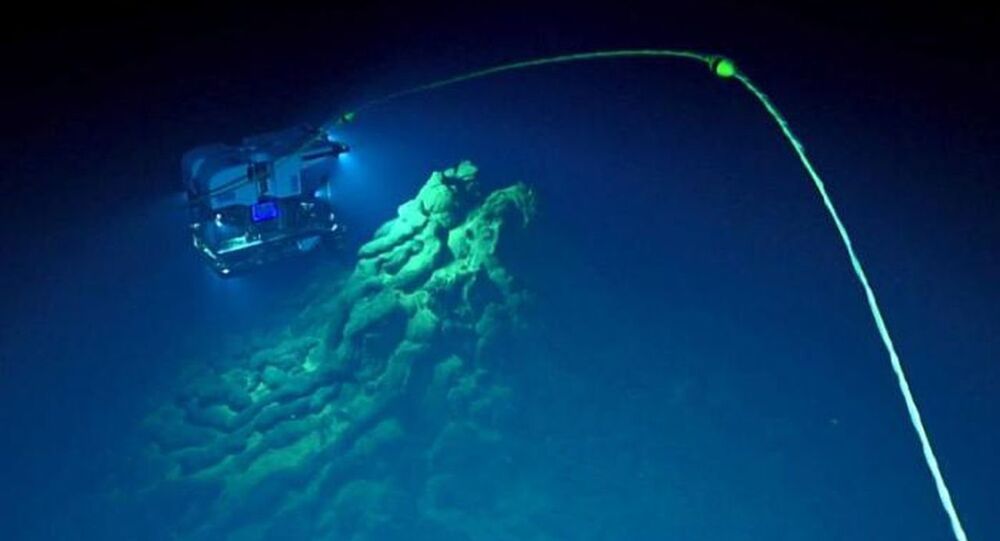 Underwater magma flows and blasts occurring on the sea floor were first sported in videos dating back to 2009 and were found to have taken place long before that year. However, a recent submarine discovery, made in 2016, refers to what had happened just months prior, and researchers cited evidence proving the suggested timeline is correct.

Researchers have spotted a phenomenal site — an extraordinarily vast field of volcanic glass, which resulted from a the deepest known volcanic eruption on planet Earth in 2015 at a staggering 4,050-4,450 meters below the sea level, a report in a special issue of Frontiers in Earth Science has it.

Sitting almost on the cusp of the Mariana Trench, a subduction area on the tectonic borderline with one plate slipping under another, the field spans 7.3 kilometers (4.5 miles) across a region known as the Mariana Trough, a back-arc basin of the enigmatic Mariana Trench. The glass is formed as scorching molten magma meets cold water flows and afterwards rapidly cools.

It is not immediately clear, in light of the breath-taking depths and hardly “any clues on the surface,” when the “elusive” eruption took place, but research by the Woods Hole Oceanographic Institute's autonomous underwater vehicle Sentry  and other subsequent missions’ equipment suggested it happened just months before December 2015.

The researchers based their assumptions on so-called “hydrothermal vents,” which traditionally attract underwater species to areas shattered in a blast and invite them to colonize it and create a new ecosystem: traces of that were discovered by the side of the trench in 2016, which prompted the researchers to believe the blast had occurred just months prior to its discovery.

Some underwater blasts were earlier caught on camera, namely at the hands of the US’ National Oceanic and Atmospheric Administration (NOAA), which  provided intriguing footage back in 2009:

After the initial post-eruption lava heat vanishes, the system “cools down and the mobile organisms will leave.” The 2015 eruption is a rare case indeed, since submarine lava eruptions are usually detected long after they occur.

NOAA is currently conducting a telepresence-enabled ocean exploration expedition on board Okeanos Explorer to collect critical data on “unknown and poorly understood deepwater areas surrounding Puerto Rico and the US’ Virgin Islands and offering a live video stream,” according to NOAA’s website.

Mysterious White Cloud Hanging Over Long Dead Martian Volcano. What is It?