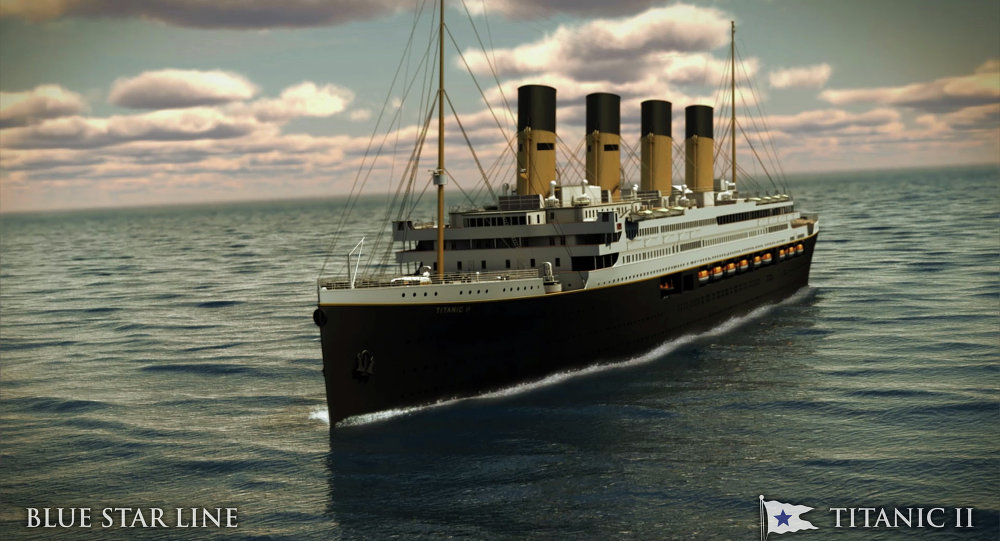 It’s Not a Sequel: Titanic II to Launch in 2022, Netizens Mock Planned Voyage

When news broke about the polar ice caps melting due to global warming, most people set into some sort of panic or worry. However, one cruise line saw nothing but cash: now, finally, they could rebuild the ill-fated RMS Titanic, without the fear of icebergs to smash her up.

YouTube
Full Size Titanic Replica to Become Centerpiece of New Chinese Resort
Blue Star Line has begun building a replica of the RMS Titanic, once the world's largest cruise ship. The Titanic II will be a near-exact replica of the original Titanic, except for being a few meters wider to give it additional stability, the line's website says.

Blue Star Chairman Clive Palmer has been trying to build the $500 million replica since 2012, but encountered financial problems until only recently, he told MSN Monday. The new ship, planned to launch in 2022, will carry the same number of passengers and crew: 2,400 travelers in three classes — just like the original — and a crew of 900, armed with modern navigation and safety technology, and this time plenty of lifeboats.

Titanic II, really? Because that worked so well the first time.

© AP Photo /
Titanic Secret: Sunken Ocean Liner Found During US Navy Cold War Mission
​Armed against what? What's the big deal with the lifeboats? Well you see, the reason it's Titanic II is that the first Titanic sunk on its maiden voyage. It collided with an iceberg on the North Atlantic in April 1912 and sank. There weren't enough lifeboats to accommodate the number of people on board, and most people wound up in the freezing water, so over 1,500 of its passengers and crew drowned before rescue arrived.

Kind of makes you wonder: why build another one? After all, the first one was boasted as being "unsinkable," so how could one possibly sell this as being any safer?

​It gets a little more terrifying when you consider that the first voyage the ship will make will be the same one the original Titanic made, from Southampton, England, to New York, USA. But hey, maybe they think there won't be enough icebergs around by 2022 to stop them?

The race is on! Will the Titanic II sail in time to hit the last iceberg?

​​Or maybe this oddball ice chunk from the Larsen C ice shelf in Antarctica is really Chekhov's gun?

​Palmer said that after (assuming the maiden voyage goes swimmingly) its inaugural transatlantic voyage, Titanic II will "also circumnavigate the globe, inspiring and enchanting people while attracting unrivaled attention, intrigue and mystery in every port she visits."

The website presently gives no information about ticket sales, but it does note that there are not presently any staff openings on the ship.

​The first RMS Titanic sits on the seafloor off the coast of Newfoundland, Canada, in two pieces, under about 12,000 feet of water. US Navy officer and oceanographer Robert Ballard found the wreck in 1985 using a remotely piloted submersible, and subsequent expeditions have returned a number of artifacts to the surface, which have been viewed by tens of millions in exhibitions around the world, including the ship's bell.

As a merchant seaman, I am fully aware that technology on vessels has come a long way, from state of the art navigation to life saving equipment (100% capacity on each side of the ship), even training of crew has improved.

And I still won't be going anywhere near #TitanicII

​Perhaps most shocking was that even after more than 70 years, oceanographers found the Titanic's swimming pool still full.