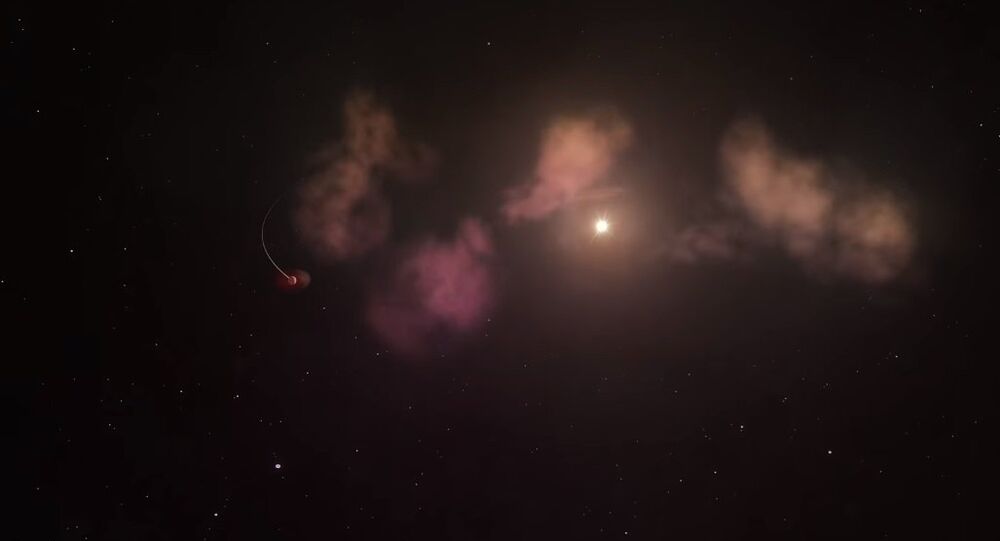 US astronomers have discovered that the non-periodic blackouts experienced by the RZ Piscium star could be caused by huge orbiting clouds of gas and dust.

A team of US researchers has suggested that the RZ Piscium star, located 550 light years from Earth in the constellation Pisces, is capable of destroying exoplanets which rotate around it.

The astronomers found out that the brightness of RZ Piscium drops ten-fold from time to time, for periods of up to two days.

In such cases, the star starts to emit more energy in the infrared spectrum, indicating the presence of a cloud of dust. Previously, scientists saw RZ Piscium as a young star, surrounded by a dense belt of asteroids which often collide and crush.

Using the European Space Agency's (ESA) XMM-Newton satellite, the Shane 3-meter telescope at Lick Observatory in California and the 10-meter Keck I telescope at W. M. Keck Observatory in Hawaii, the scientists managed to determine that RZ Piscium is between 30 and 50 million years old, which would make it rather young.

According to an alternative hypothesis, however, RZ Piscium could be older than the Sun and starting to expand into a red giant. By increasing in size, the star destroys the rotating planets around it, which in turn explains the existence of orbiting cloud of dust and gas.

Is the star RZ Piscium snacking on its own planets? Data from @ESA_XMM, @lickobservatory, and @keckobservatory reveal the aftermath of a disaster of planetary proportions: https://t.co/QHULrIbIIv pic.twitter.com/lmmP9BPNcU

Kristina Punzi, a doctoral student at the Ney York-based Rochester Institute of Technology and lead author of a survey on the findings, referred to the astronomers' observations, which he said showed "there are massive blobs of dust and gas that occasionally block the star's light and are probably spiraling into it."

"Although there could be other explanations, we suggest this material may have been produced by the break-up of massive orbiting bodies near the star," she pointed out.

Punzi was echoed by team member Ben Zuckerman, an astronomy professor at the University of California, Los Angeles, who said that "the fact that RZ Piscium hosts so much gas and dust after tens of millions of years means it's probably destroying, rather than building, planets."