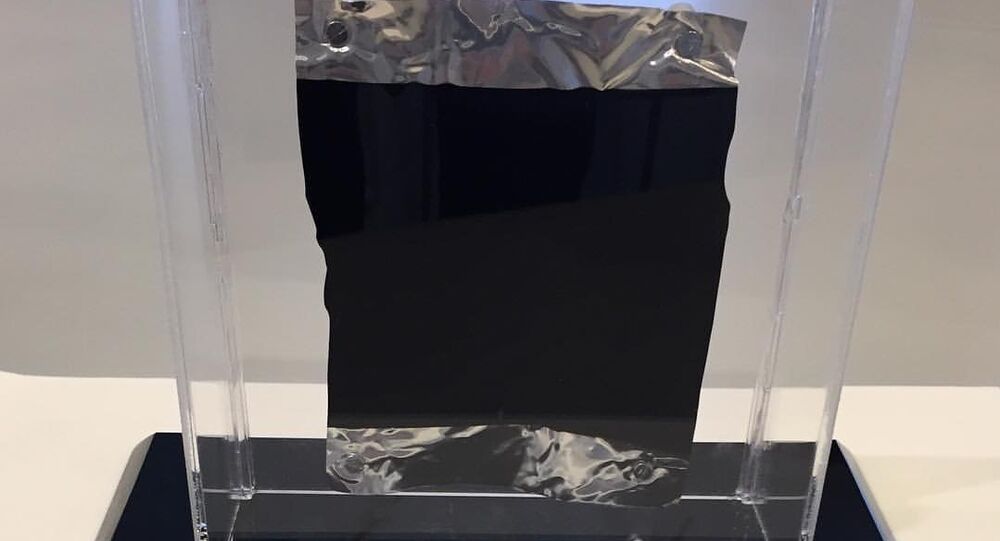 A nanotube material that looks like a black hole will be used as construction material for Winter Olympics in South Korea.

Vantablack is a man-made substance first presented in 2014, and still drops jaws due to its incredible properties. All in all, it absorbs 99,9 percent of light, which is even more than charcoal, with its 96 percent light absorption. It is so black that the human eye cannot distinguish any shape, and any three-dimensional object coated with it looks like a black silhouette.

The material's properties come from its structure: it is made of vertically aligned nanotubes, whose shape is so perfect and precise that photons that get between them become effectively trapped and never make their way back, turning into heat.

"Carbon nanotubes are like very, very long blades of grass," says Ben Jensen, co-founder of Surrey NanoSystems, the Vantablack manufacturer. "Now you imagine if you were a human walking around in grass 1,000 feet tall how little light would get down to you. It's like that but on a very tiny scale."

Talking to the journalists, Jensen explained two weird inquiries. One person wanted to wrap themselves in the material, which is not recommended, as with any nanoscale material, Vantablack would irritate your skin.

The other one wanted to eat the material and film it. The things people do for YouTube views.

There is a better application, though. According to CNN, this material will be used for an architectural design for the 2018 Winter Olympics in Pyeongchang, South Korea. A British architect of Pakistani and Tanzanian heritage named Asif Khan plans to use for an object that he describes as "schism in space."

A pitch black building coated with the stuff will be decorated with small lights that look like stars on a night sky — but in a broad daylight.

"It will be like you're looking into the depths of space itself," said Khan. "As you approach the building that star field will grow to fill your entire field of view, and then you'll enter as though you're being absorbed into a cloud of blackness."

The idea behind the project is to create a contrast to the general whiteness of the Winter Olympics, provoking a philosophical experience by presenting visitors with a "void of infinite depth and possibility." Sounds like Kazimir Malevich's famous Black Square, yes? Imagine if the Soviet-born Malevich had access to Vantablack.

Khan has a long history of working for the Olympics. In 2012, he worked with Coca-Cola for the London Summer Olympics to create a Beatbox Pavilion — a structure full of interactive beatbox machines that reacted to proximity and touch.

In 2014, he worked with Russian cell carrier Megafon to create Megafaces — a huge display of 11,000 telescopic cylinders that acted like 3D pixels and formed three-dimensional faces of the visitors who had been previously scanned by Megafon equipment.