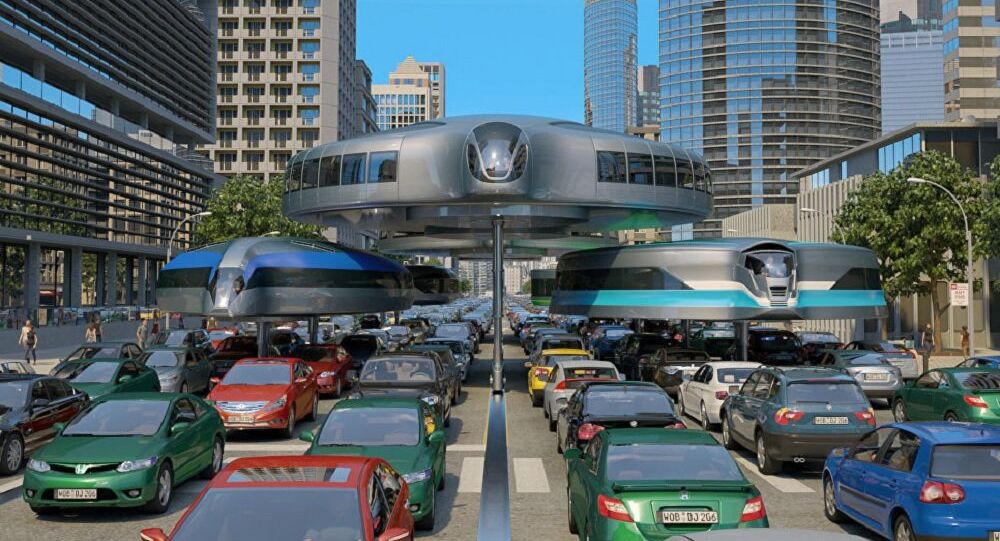 Russia is no stranger to traffic problems. According to navigation company TomTom, Moscow and St. Petersburg are among the top 25 most congested cities in the world, with three more Russian cities in the top 100. But Russian inventor Dahir Semyonov has a solution –'gyrotrains', a technology he says is the transport of the not so distant future.

Featuring powerful gyroscopes and maintaining a balance thanks to their heavy flywheel, Semyonov's gyrotrain glides along dedicated rails several meters above ordinary vehicles and pedestrians. Most importantly, he says, his solution is affordable, safe, ecofriendly, and can be implemented along existing road networks.

Semyonov, a native of Karachaevo-Cherkessia, lived in Moscow between 1982 to 2006, working in the construction industry. In 1993, he and a group of colleagues bought a stake at Moscow's Krasnaya Presnya plant, known in the Soviet period for its production of casting machines, molding machines and other industrial equipment, and produced vibro press equipment. In 2006, the engineer moved to Istanbul, Turkey, where he founded the prefabricated housing technology company Dahir Insaat, which has developed a series of unique, patented design and construction solutions.

© Photo : Transmashholding
Top Russian Locomotive Manufacturer Reveals Promising Projects in Rail Industry
In addition to housing, Semyonov has an eye for transport. The gyrotrain concept is his pride and joy.

Speaking to Russia's RIA Novosti about his thought process, and what drove him to come up with the gyrotrain idea, Semyonov explained that it all comes down to the physics of engineering.

"Any problem has a limited number of possible solutions," he said. "The same is true as far as traffic jams are concerned. One can take off and to start flying over roads, build multi-level roads or a complex tunnel network, force motorists to switch to micro cars equipped with AI and navigation systems, build monorails or cable cars over existing cars, etc. But all of this is complicated, expensive, and most importantly, won't allow for the required speeds, or the volume of passenger transport."

Focused on the here and now, the engineer stressed that what's needed is to take account of existing road networks, complete with their endless traffic jams. Between vehicles and the roads themselves, all that's left is the divider in the center of the road.

"Here, along this thin dividing line, we can put a standard railway rail," Semyonov said, insisting that it must be a standard, ordinary rail, so as not to require the creation of an entirely new industry.

© AP Photo / Manish Swarup
Why an Indian Entrepreneur Wants to 'Bring Young Brains' to Russia
"This will allow us to solve the problem in an unconventional way," the engineer explained. "A rail just two centimeters above road level will not interfere with road traffic; it will be possible to drive across it in any direction. As a result, what we will have is a powerful vehicle able to move across existing roads, requiring only a narrow strip between the lanes."

Semyonov believes his invention will convince many commuters to forgo their private cars in favor of the new form of public transport.

"The gyrotrain will be spacious, light, comfortable, quiet, and safe; it can even have a café and a bathroom in the cabin. Having a cup of coffee or a glass of fresh juice and a sandwich on the way to work will become a common thing for passengers of this form of transport," he said.

According to the inventor, his gyrovehicle can be built quickly, and function exactly as it is envisioned.

"There is not a single technical issue for which a clear, comprehensible, engineer-calculated answer cannot be found," he stressed. "I don't want to engage in building castles in the clouds, and can promise that the gyrotrain would ride perfectly smoothly, and stand as if rooted in the ground when necessary. Following a 15-20 minute spin-up of the flywheels using diesel generators in the mornings, its gyroscopes can be powered in part by the energy of roof-mounted solar panels. Traveling on such transport will be just as safe as on any ordinary bus."

Over the past century, inventors have come up with a variety of devices and tools using the gyroscopic effect, from navigation instruments for space travel to a gyroscopic self-leveling billiard table.

"Many remarkable inventors have devoted years of their lives to studying flywheels and the gyroscopic effect," Semyonov recalled. "Among them are well-known figures such as Petr Shilovsky, Augustus Sherl, Louis Brennan, and of course my fellow countryman Nurbey Gulia, who spent his entire life searching for the ideal store of energy."

As for his idea, Semyonov has "no doubts" that there is a need for the gyrotrain in the cities of the world, nor that the technology can begin to replace buses, trams and trolley buses from cities in the future. He is convinced the gyrotrain has immense potential as an efficient, economical, safe, environmentally friendly, and comfortable mode of transport. The inventor stressed that in the event that his idea is implemented, he feels a personal obligation as author and patent holder to engage in every stage – from design and construction to the first prototype, to testing and certification of the vehicle for industrial production.

Something particularly important for Semyonov is that his invention stays in sync with its urban surroundings. "After all, it is absolutely safe, both ecologically and physically.  A gyrotrain cannot cause a person serious injury, even if it collides with them, except by pushing them out of their way if they are standing on its lone rail. Even if is de-energized in case of an emergency, a gyrotrain will calmly drive on to the next stop, where it will be able to drop off its passengers."

© Sputnik / Pavel Lisitsyn
Russian Scientists Develop Software for Next-Gen Nuclear Reactor Technology
Semyonov's gyrotrain concept exists only in the form of a digital prototype in AutoCAD. Dahir Insaat is in discussion with Qatar about the project's possible realization. The inventor says that the first 20 gyrotrains could be ready in time for the 2022 Qatar World Cup. What's more, he believes there are opportunities to introduce the project in Moscow, possibly on a limited scale at first – for example on the route from Dynamo Metro station to Sheremetyevo Airport.

For now, the engineer hopes to complete the design of the full range of gyrotrain vehicles and stations. "If everything goes according to plan, the first passengers will be able to start riding comfortable urban gyrotrains, free of charge, over the next few years. It is my hope that this will become the most important development in the field of transport over the last two decades," Semyonov concluded.