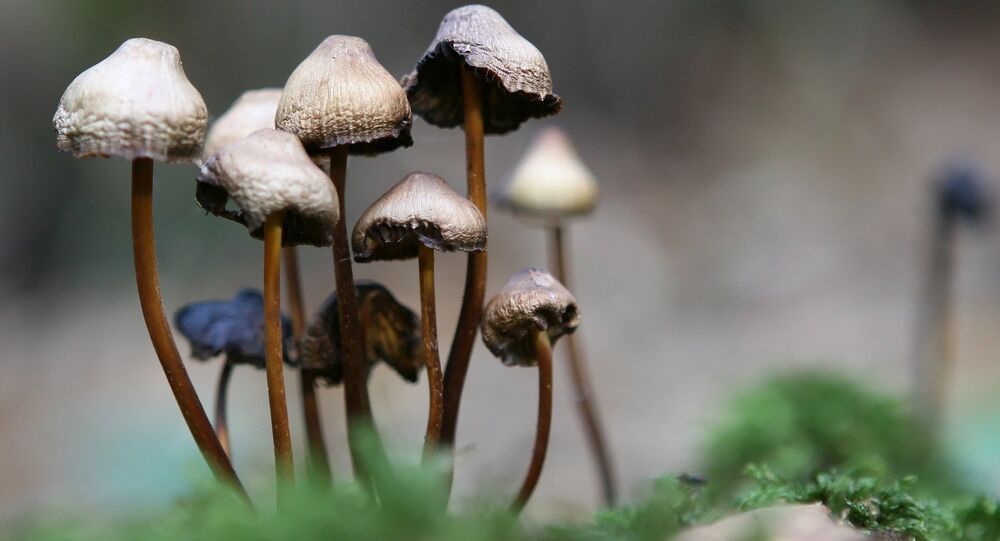 Hallucinogenic mushrooms have been found to help alleviate depression, even in severe cases where other kinds of treatment fail to do the job, and new research is providing insight into the secrets of how our brains function.

Led by Dr. Robin Carhart-Harris, researchers from Imperial College London have used the psychoactive compound psilocybin, commonly found in so-called magic mushrooms, to treat depression in patients and have used brain scan techniques to observe how precisely the hallucinogen influences the brain, according to a report by The Guardian.

© Photo : Courtesy of the Museum of Moscow
Could Psychedelic Mushrooms Help Those Battling Depression?
The fact that psilocybin has now been shown to be a potent cure for depression became known in 2016, when Carhart-Harris's team first used the chemical compound on a group of patients. As Sputnik reported at the time, the initial test included a group of 12 patients, aged 30-64, who failed to find a cure for their condition via conventional pharmaceutical methods. Eight patients out of the original twelve claimed a full remission from what they had documented as decades-long battles with mental and emotional distress.

The results were recognized as a major medical success.

"For the first time in many years, people who were at the end of the road with currently available treatments reported decreased anxiety, increased optimism and an ability to enjoy things. This is an unparalleled success and could revolutionize the treatment of depression," said Amanda Feilding, co-director of the research.

During that initial test, however, the team observed further research would be needed to understand how exactly the psychoactive compound affects the human brain.

This year, the team gave the psilocybin compound to a group of 20 patients and the treatment was found to be largely successful — about half of the group reported feeling well just five weeks after the ingesting the medication.

But this time, the team acquired additional data on mental activity via brain scans.

First, the scans confirmed the previous year's finding that psilocybin reduces blood flow in the area of the brain called the amygdala the area responsible for processing emotion — primarily those qualitatively assessed as negative, such as anxiety and fear.

According to the BBC report, the team found that the greater the reduction of activity in the amygdala, the greater the improvement in reducing symptoms. According to BBC, the interconnected brain structure known as the "default-mode network" also became more stable after using the compound.

© CC0 / Pixabay
Survey Finds Magic Mushrooms Safest Recreational Drug, But Caution Still Advised
As an added benefit, psilocybin appears to temporarily limit connectivity between certain parts of the brain. According to a Verge report, this disruption of connectivity is what causes the psychedelic effect of magic mushrooms, in which people lose their sense of "self" — called by psychologists the ego — when experiencing the effects of the compound.

But brain scans performed after the treatment were surprising, as, following the treatments, there turned out to be enhanced connectivity between brain regions. Researchers describe the effects by noting that psychedelics break old connectivity patterns and boost the brain to create new and healthier mental structures.

This effect has been supported by the patients, who all reported some kind of welcomed mental reset.

According to Dr. Carhart-Harris, "Patients were very ready to use this [computer reset] analogy. Without any priming they would say, 'I've been reset, reborn, rebooted', and one patient said his brain had been defragged and cleaned up."

This year's experiment has its weak sides, though, since the test group was still quite small; there was also no control group — a group of patients given the placebo treatment — to compare results.

According to the Guardian, Professor David Nutt, director of the neuropsychopharmacology unit in the division of brain sciences, and senior author of the paper, said: "Larger studies are needed to see if this positive effect can be reproduced in more patients. But these initial findings are exciting and provide another treatment avenue to explore."

"What is impressive about these preliminary findings," said Professor Mitul Mehta from the Institute of Psychiatry at King's College London, "is that brain changes occurred in the networks we know are involved in depression, after just a single dose of psilocybin."

"This provides a clear rationale to now look at the longer-term mechanisms in controlled studies," he said, cited by the BBC.