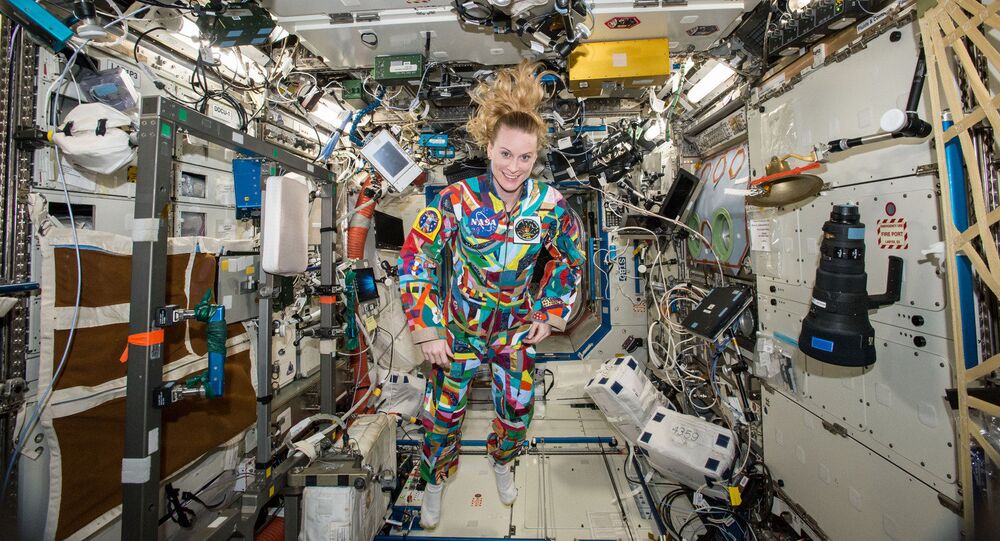 Russian and American cancer patients have made a special present for cosmonauts of the International Space Station by painting a spacesuit that will be delivered to the station by Russia's Progress MS-07 cargo spacecraft.

WASHINGTON (Sputnik) — Russia's Progress MS-07 cargo spacecraft will deliver to the International Space Station (ISS) on Saturday, along with fuel, food and water, an unusual spacesuit, named Victory, hand-painted by cancer patients in Russia and the United States, Alyona Kuzmenko, the founder and president of the Unity Movement, told Sputnik.

The cancer patients have decorated the spacesuit as a part of the Space Suit Art Project, supported by Russia's state space corporation Roscosmos, the US National Aeronautics and Space Administration (NASA) and other international space agencies.

© Sputnik
The unusual spacesuit, named Victory, hand-painted by cancer patients in Russia and the United States.

"Children and adults battling cancer as well as their families in Russia’s cities of Moscow, Lipetsk, and Yaroslavl painted the pieces for the Victory spacesuit together with Russian cosmonauts Yuri Gidzenko, Andrei Babkin and Nikolai Tikhonov. … The spacesuit has also visited the homeland of the project, the US city of Houston," Kuzmenko said.

During a master class at the Texas Children’s Cancer Center in Houston, Tikhonov and NASA astronauts Jack Fischer, Nicole Stott, Michael Foreman and Douglas Wheelock, together with the children staying at the center, painted on fabric pieces for the Victory and Exploration spacesuits.

"Russia joined this international project in 2016, when Russian patients together with children and adults from the United States, Canada, Japan and Germany drew their dreams on a spacesuit Unity. The main idea of the project is to express one's dream by painting on the spacesuit. As the dream that has reached the stars, will definitely come true," Kuzmenko added.

© Photo : NASA
Watching You Without Me: Russian Cosmonaut Shares Photos of Earth Taken From ISS
Russian cosmonaut and the commander of Expedition 53/54 Alexander Misurkin will welcome the Victory spacesuit on board of the ISS. Misurkin was one of the first supporters of the Space Suit Art Project in Russia.

Misurkin told Sputnik that he was very hopeful that the project would provide cancer patients with additional strength to fight the severe disease.

"I hope that when the oncology patients, who participated in the project, see the art spacesuit in space, it will give them additional strength to recover and understanding that everything is achievable in life," Misurkin said.

The Victory spacesuit, manufactured by Russia’s Research & Development Production Enterprise Zvezda, is the fifth spacesuit created by the project, and is the first spacesuit initiated by Russia. The other four space suits all carry symbolic names — Unity, Hope, Courage and Exploration.

© Sputnik / Maksim Blinov
Soyuz MS-06 Manned Spacecraft With New ISS Team Launched From Baikonur
The Space Suit Art Project was launched by US astronaut Nicole Stott and the director of the arts in medicine program at the University of Texas MD Anderson Cancer Center, Ian Cion, to demonstrate the benefits of arts and science to adults and children fighting cancer. Over the last few years, the project has grown to include the ISS partner countries.

In Russia, the Space Suit Art Project is developed by the Unity organization, supporting cancer patients, in collaboration with Roscosmos, Zvezda, the MRI-Expert chain of diagnostic centers and Modulbank.