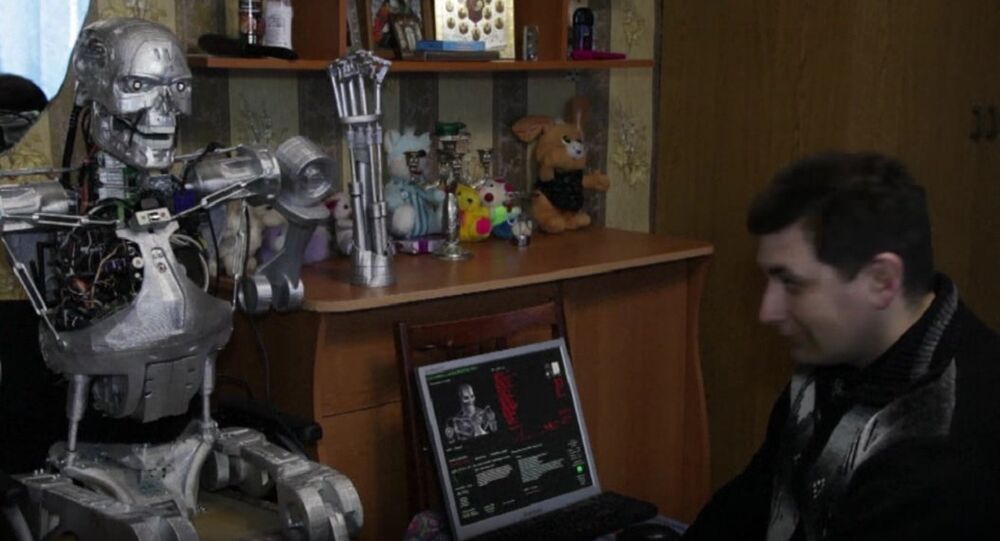 He is Back! Russian Engineer 3D-Prints 'Terminator' Copy With AI (PHOTOS, VIDEO)

This “Terminator” doesn’t need your clothes, your boots and your motorcycle yet, because it can’t walk for the time being. However, this T-800 robot is clever enough to talk with you, self-educate, move his head and blink.

Regina Konstantinova — "My name is John Henry. I was activated in September 2011. I belong to cybernetic organisms. Designed in the image and likeness of the T-800 robot from James Cameron's film "Terminator." I was created by a genius man. His name is Alexander Osipovich," said the Russia-speaking robot.

Inspired by the 1991 film "Terminator 2: Judgment Day," Russian software engineer Alexander Osipovich created his own copy of the T-800 robot, He was just six years old when he saw the movie and decided to build the "Terminator," he told Sputnik.

Osipovich received detailed schemes of the robot with all the instructions for installing servomechanisms from Google Inc. in 2013, when the company held an assistance program for individual designers. The engineer also bought a 3D-printer to print the endoskeleton at home.

"It took nearly 10 years to write the software and two years to print the body," Osipovich explained. "The robot is made of ABS and PLA plastic; the software is written in Visual Basic," he added.

The Russian T-800 sits in a wheelchair as it doesn't walk yet, but it still has an impressive bunch of skills.

"It can recognize people and their voices and search for information on the Internet, answering simple questions starting with ‘what is,' ‘who is,' ‘what means' and ‘how.' The robot is also able to display visual images on request after hearing ‘show me what… looks like,'" the robot's creator said.

"Of course I plan to upgrade it — there is no limit here. At first, it is necessary to connect the robot's hands with the body and then try automatic movement in a wheelchair." Sometime later, "John Henry" will be also able to walk. That is when we all should be scared of humanity being enslaved by the Terminator!

Sawing Orangutan Competes With a Robot