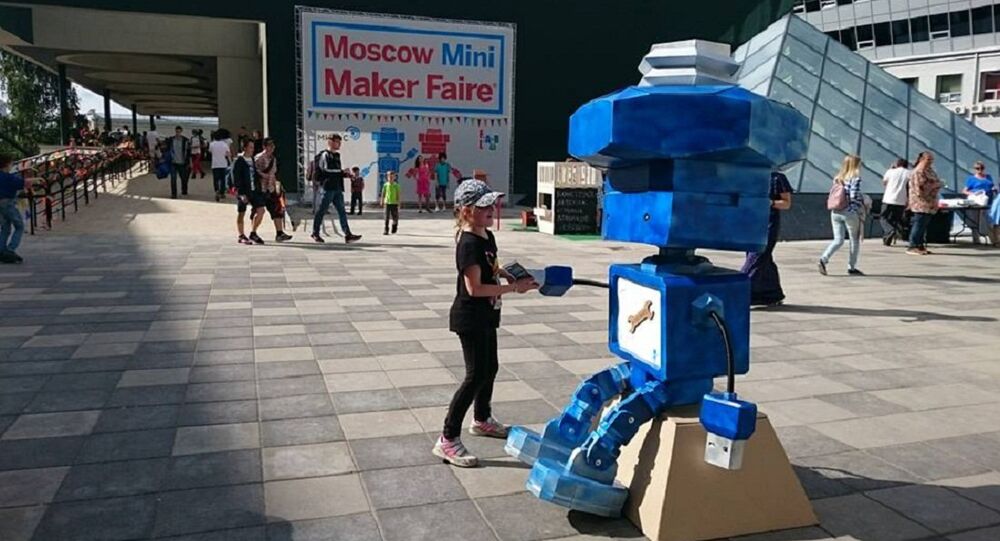 A global trend promoted by inventors, entrepreneurs and designers, who blend open-source philosophy, cutting-edge technology and do-it-yourself attitude to create innovative products is getting increasingly popular in Russia. Participants of the Moscow Mini Maker Faire told Sputnik why.

There is every reason to assume that the so-called "Maker Movement in Russia will actively develop in the coming years," Vladimir Kuznetsov, one of the organizers who heads the Moscow-based Fab Lab laboratory, told Sputnik.

What makes it so appealing is that anyone, be it an enthusiast, a professional inventor or a multinational corporation, can join.

"The Maker movement is inextricably linked to Internet," he said.

The World Wide Web used to be a problem when a decade and a half ago those who enjoyed making home radios or aero models abandoned their hobbies for online forums and social media. But Internet has now become a solution.

​"There are numerous [online] platforms created to exchange ideas, files, experience and knowledge. The digital revolution is coming to an end in IT and computing, but it is underway in manufacturing," Kuznetsov observed.

This dramatic change is taking place at a time when people have rediscovered a desire to create something with their own hands, he added.

Modern-day crafters rely heavily on innovative technological solutions, like 3D printing. Combined with open-source libraries, 3d printing can be used to produce almost anything, including artificial limbs, cars and robots.

In fact, the world's first printable open-source humanoid robot, PLEN2, was showcased at the Moscow Mini Maker Fair. It might be only 20 centimeters high, but PLEN2 is nothing short of impressive. Designed a decade ago, it can walk, play football and dance. The most exciting part is that you only need the design, a 3D printer and a screwdriver to assemble the robot.

Interestingly, the robot has been created in a country that has failed to embrace the open-source culture so far. "Approximately 90 percent of our customers are foreigners," while only 5 percent come from Japan, Atsuhiko Tomita, COO at PLEN Project Company Inc., told Sputnik.

For its part, Russia has also been keen to embrace the Maker culture. For instance, a 3D printer, designed and manufactured by the Moscow-based company REC, was featured at the event that took place on July 9-10. In addition, in 2017, 3D printing will be introduced as a core course in schools across the country.

Another Moscow Mini Maker Fair participant, Cecilia Tham is confident that the Maker movement could well become a solution to rebooting national economies at a time of staled global economic growth. The founder of Makers of Barcelona and FabCafe Barcelona said that Barcelona's maker community features thousands of inventors.

Unemployment has been a major factor behind this trend.

One of the reasons is that we as a society can no longer accept the current situation. Youth unemployment in Spain is approximately 50 percent. The overall unemployment level in Spain has reached 23 percent," she said.

The Forgotten Gadgets of a Bygone Era