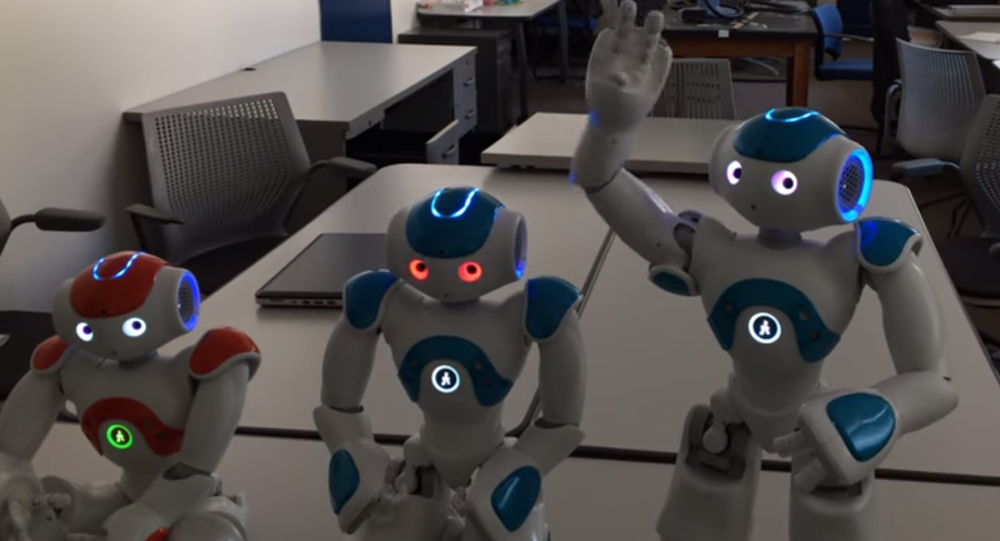 An American startup claims it can wake emotions in robots. The company - named Emoshape - has developed a computer chip, capable of synthesizing twelve human emotions in artificial intelligence systems.

© Photo : Youtube/WIRED
Dancing Kings: Robots Accept Running Man Challenge
In an interview with Sputnik, the company's CEO Patrick Levy Rosenthal commented on the new invention and explained what goals the chip is designed to achieve.

"The very next step is to integrate the chip into the robots to help them sense the world," Rosenthal told Sputnik.

According to the expert, robots are able to learn any information you give them, but they can't sense the actual meaning of the words. The machines "learn whatever you feed" them and save the information being unable to appraise it.

According to Rosenthal, the invention makes perfect sense as one day autonomous machines would see humans as their main competitors and try to take control. But teaching robots to empathize and feel positive emotions can help us all avoid that dystopian scenario and reduce potential threats of the artificial intelligence.

"We know that machines are getting smarter and faster," the expert said. "Robots will become a new species on the Earth soon".

"It [the new chip] will allow the machine to have empathy with humans," Rosenthal said. "So if we implement emotions into the machines they would be able to feel and understand ‘what humanity is'," the expert explained.

Rosenthal explained that the chip has twelve emotions: six positive and six negative. The positive emotions like love, trust, happiness generate pleasure in the machine, while negative emotions make the robot feel pain.

© Photo : Pixabay
Machine Pain: Scientists Create Robots That Chicken Out When They're Hurt
In Rosenthal's opinion, in this way humans will be able to control robots, almost like parents control their children.

"You can control them like a kid. If the kid does something bad, you show that you have a negative emotion and stop the kid [from doing so in the future]," the expert concluded.