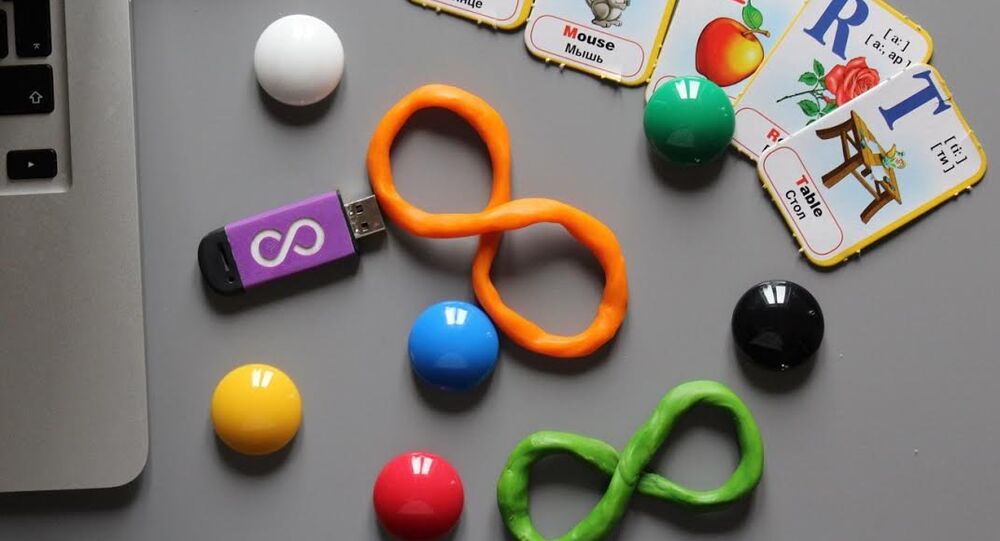 Sputnik presents a second list of the top-five Russian innovative projects which have a chance to become known worldwide within the next few years.

© Photo : Timofei Rakin
Five Russian Business Startups That Can Change the World (PHOTO, VIDEO)
The presentation of these innovative projects took place on the StartUpShow which is a platform for the development of small and medium-sized enterprises. The platform together with Sputnik is launching a joint project to search for and support start-ups in more than 30 countries.

The problem of running memory on electronic devices is solved once and for all as the startup FlashSafe, presents the world’s first unlimited SmartFlash. It was created by the team of Russian businessman Alexey Churkin providing customers with an unlimited amount of storage capacity in one device.

“The most important thing for us is security. To create a cloud with the information one does not need a login and password, not even a browser. Authorization is done by a USB-key. All files are encrypted at the client level, even we do not know what the user stores on his server,” the developer explained.

Russian innovation projects are popular not only in Russia but also abroad. “Recently, the Minister of Defense of Cuba expressed interest in cooperation,” Churkin said.

First look at the BigPad, a six-foot unit with a touchscreen, camera and a card reader, gives an impression of a large conventional tablet and was developed by the Russian entrepreneur Ivan Alekhin.

“Any program can be loaded into the device. The tablet can become an advertising platform, can be used for shopping at an online store or even become a trading kiosk,” Ivan Alekhin said.

He further noted that 98% of the components are produced in Russia, with a vast majority of buyers being foreign companies.

Currently, more than five thousand units have been exported to other countries. For example, in Dubai BigPad is already in shopping centers. In Austria, BigPad is being used to sell bitcoins and in Colombia it is planned to install them on the subway for public use.

The innovative technology allows 30Sec Milk to pasteurize and package the milk 30 seconds after milking cows. There is no need to wait until the milk from the farm goes through several stages of processing.

The technology works as follows: vacuum pumps milk the cow, it then passes through a filter and the milk is pasteurized for 10 seconds at a temperature of 75 ° C. Right after that it is cooled to 3-5º C and then poured into packets.

On each package the buyer will be able to find a QR-Code. By scanning it on a smartphone, the buyer can see photo of the cow, its age, breed and feeding method.

Entrepreneur Andrew Kuteinikov spoke to Sputnik about the future plans of the project, “We do not plan to sell our equipment or milk. Our option is to sell the technology license. Currently the project is at a samples stage production. Hundreds of applications from farmers around the world are waiting to benefit from our technology,” Kuteinikov said.

Modern day parents will not have to worry about the safety of their children with the “GeoLife Baby”  satellite system, as it will track the location of their child and its movements.

Parents can observe movement of their children and know the child’s exact location at all times.

“The gadget, which is a part of GeoLife baby system, determines the location of the child with an accuracy of up to 3 meters. With our device, you can determine not only the latitude and longitude but also height above sea level,” president of the group of companies, Anatoly Kurmanov, told Sputnik.

Re-Invention of the Wheel

The Duyunova motor-wheel is a promising development that may soon be used in the automotive industry.

Externally it looks like a common motor-wheel, which is placed on electric bikes. But in fact, the developers of Duyunova has simplified the design and increased the wheel’s power. The concept of an asynchronous motor without magnets in the wheel allows production costs to be reduced by ten times, making it attractive for automakers.

“Currently, the project is in its research stage of organizers for production. People are interested in its development but most of them are ready to buy or invest, rather than establish a production conveyer belt,” investor of the project and head of the investment department of Symex, Sergey Semyono, said.

Why Russia Remains a World Leader in Innovation