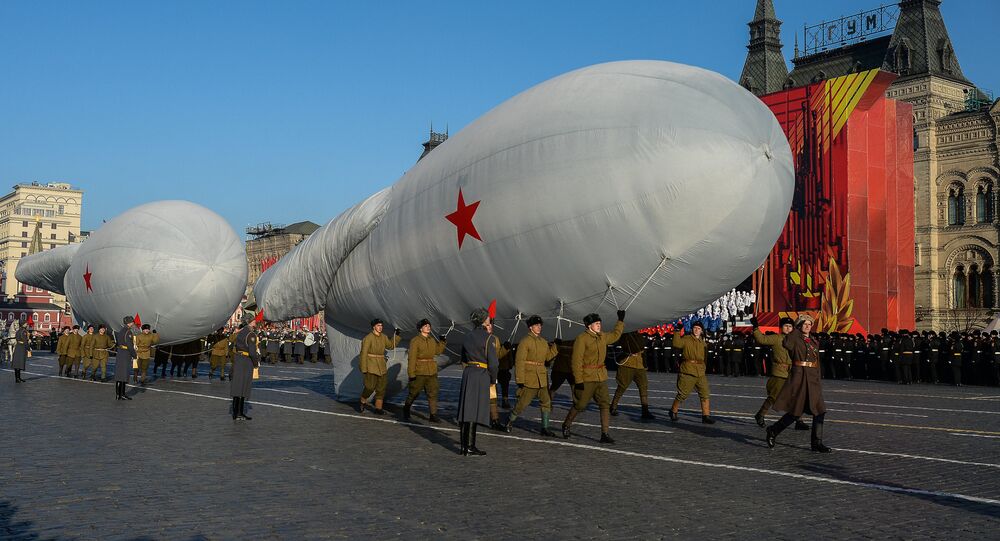 Battle Blimps: Russian Military Expands the Use of Airships

The Russian Aerospace Forces are about to be expanded as the Defense Ministry intends to establish an aerostatics division, in an attempt to expand the battlefield use of blimps and balloons.

Alexander Isaykin
Mi-35M and Co.: Russia to Showcase Helicopters at KADEX Exhibition
Along with employing the already existing Soviet-era aerostat designs, which are still used by the armed forces for military and scientific purposes, the ministry intends to create a special service in order to commission new types of balloons, blimps and dirigibles to be employed by the Aerospace Forces.

Despite often being treated as a relic of the past, blimps have already proven to be an efficient monitoring tool as they can carry a much greater amount of surveillance equipment than a standard UAV, and can "hang around" in the designated areas for weeks without the need to refuel.

Furthermore, blimps can also carry electronic warfare equipment packages, turning them into a valuable addition to any defense grid.

Therefore, it is small wonder that these craft are often used as airborne listening posts and monitoring stations by many agencies, including the US military.

Russian newspaper Izvestia points out that blimps were, and possibly still are, employed by the Russian Aerospace Forces during the campaign against Daesh (ISIL/ISIS) in Syria, as at least one aerostat was deployed over Hmeymim airbase, and at least one other "balloon" was spotted over Palmyra during a classical music concert performed there by St. Petersburg's Mariinsky Symphony Orchestra, led by Valery Gergiev.

Arkadiy Syroyezhko, chief of the UAV directorate of the Vega Radio Engineering Corporation (a subsidiary of Rostec), told Izvestia that a new type of fabric which is extremely suitable for aerostat construction is already being produced in Russia, and that it will drastically improve the military blimps’ technical characteristics.

"It took us several years to get to this moment. And now, working with the representatives of Russia’s Defense Ministry, we’re running tests on a new state-of-the-art aerostatic system developed for the Aerospace Forces," Syroyezhko said.

He also added that several types of Dozor-class aerostats and a DP-29 unmanned blimp are also undergoing final tests and may well be adopted by the military in the near future.