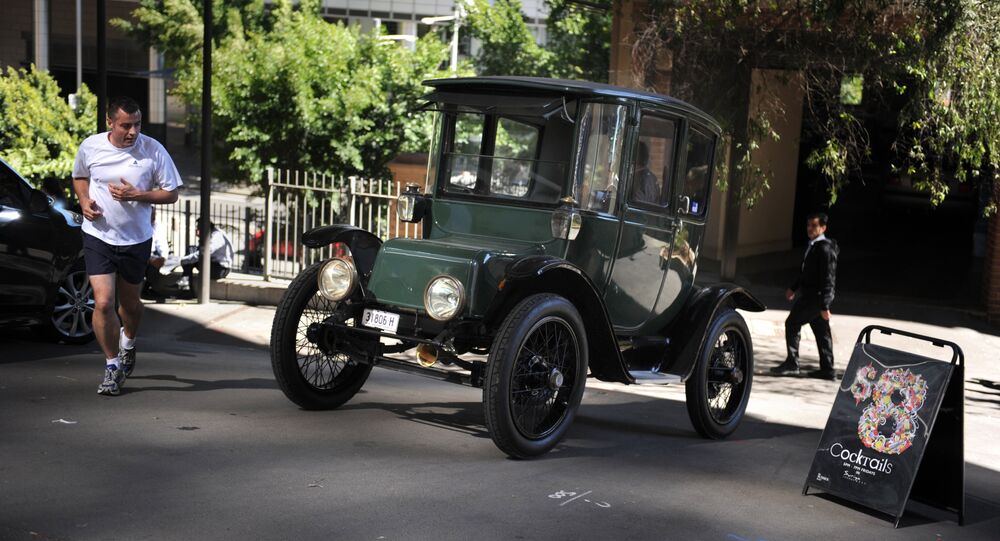 Electric Vehicles - Cars of the Future? No, the Long-Forgotten Past!

The much-hyped unveiling of the Tesla Model 3, with hundreds of thousands of pre-orders in just three weeks, prompted many to suggest that electric vehicles are the future of our transportation; however, as it turns, the concept of electric vehicles is “just a resuscitation of a long-dormant method of commuting.” Just have a look.

Nowadays, electric cars are apparently seeing a rise in popularity. Just three weeks after Elon Musk introduced the Model 3 to the world, the number of reservations for Tesla’s mass market EV is already close to surpassing 400,000.

© REUTERS / Joe White
A Tesla Model 3 sedan, its first car aimed at the mass market, is displayed during its launch in Hawthorne, California, March 31, 2016

“Whether it’s a hybrid, plug-in hybrid or all-electric, the demand for electric drive vehicles will continue to climb as prices drop and consumers look for ways to save money at the pump,” predicts the US Department of Energy.

“Currently [accounting for] more than 3 percent of new vehicle sales, electric vehicles sales could to grow to nearly 7 percent — or 6.6 million per year — worldwide by 2020,” forecasts the report by Navigant Research team, which specializes in in-depth analysis of global clean technology markets.

© Photo : Library of Congress
An electric car being charged (1900)

However, the electric cars are not an invention of modern times. The idea is over 100 years old.

“It’s hard to [attribute] the invention of the electric car to one inventor or country. Instead it was a series of breakthroughs — from the battery to the electric motor — in the 1800s that led to the first electric vehicle on the road,” the US Department of Energy says in its review on the history of the electric car.

© AP Photo
An object of unusual interest in downtown Elgin, Illinois on July 24, 1941, was this 1914 electric automobile, with aluminum body, donated as a contribution in the nation-wide campaign for collection of aluminum ware

“In the early part of the century, innovators in Hungary, the Netherlands and the United States — including a blacksmith from Vermont — began toying with the concept of a battery-powered vehicle and created some of the first small-scale electric cars,” it says.

Attempts at electric vehicles came as early as the 1830s, when Scottish inventor Robert Anderson invented the first crude electric carriage powered by non-rechargeable primary cells, according to a PBS report.

© AP Photo
The old and the new meet on a Boulevard of the former French capital. The little electric car passes an old-time horse-drawn car in Paris on Nov. 1, 1941, which has been put back into service as a result of the gasoline shortage

The first practical electric vehicle was a small locomotive built by American Thomas Davenport in 1835.

In the US, the first successful electric car made its debut around 1890 thanks to William Morrison, a chemist who lived in Des Moines, Iowa.

The US Department of Energy describes it as a “six-passenger vehicle capable of a top speed of 14 miles per hour (22.5 kilometers per hour), a little more than an electrified wagon, but it helped spark interest in electric vehicles.”

“Over the next few years, electric vehicles from different automakers began popping up across the US. New York City even had a fleet of more than 60 electric taxis. By 1900, electric cars were at their heyday, accounting for around a third of all vehicles on the road. During the next 10 years, they continued to show strong sales,” it states.

The New York Times article described how electric cars were popular among women in particular, because “early gasoline cars required more strength to crank than most women possess.”

However, by 1935, electric cars were nearly nonexistent. Let’s have a look how it happened.

As electric vehicles came onto the market, so did a new type of vehicle — the gasoline-powered car — thanks to improvements which were made to the internal combustion engine in the 1800s.

“Henry Ford introduced the concept of mass production of cars onto the market, drastically reducing the price of gasoline-powered vehicles by around 1912,” says the US Department of Energy article.

However, gasoline cars “required a lot of manual effort to drive — changing gears was no easy task and they needed to be started with a hand crank, making them difficult for some to operate.”

Additionally, electric cars didn’t have any of the issues associated with steam or gasoline. They were quiet, easy to drive and didn’t emit a smelly pollutant like the other cars of the time.

The drastic difference in price, however, played a role.

© AP Photo
The new type of electric car exhibited for the first time on occasion of a fashion show in Paris on May 31, 1941

For comparison, a gasoline car during that year cost $650, it says, while an electric roadster sold for nearly three times the price at $1,750.

Other developments also contributed to the decline of the electric vehicle.

By the 1920s, the US had a better system of roads connecting cities, and Americans wanted to get out and explore. With the discovery of Texas crude oil, gas became cheap and readily available for rural Americans, and filling stations began popping up across the country.

© AP Photo
This car once caused a good deal of excitement in the Paris elegant circles and upper class. It is the first model of an electric car and belonged to the Banker Baron Edouard de Rothschild, who has been de-nationalized by the French government

However, very few Americans outside of cities had electricity at that time, the article says.

As it turned out, gas-powered cars were preferred over the electric vehicles due to their to affordability and simplicity.

A century later, technological advances and problems related to the long-term supply of oil have revived demand for electric vehicles.

On the other hand, “lately, super-cheap gas prices have put a huge damper on hybrid and EV sales compared to years past,” according to automobile news website Jalopnik.

Industry observers worry that the trend could stunt EV development yet again.

Elon Musk: Tesla Cars to Self-Drive Across Country in 2 Years