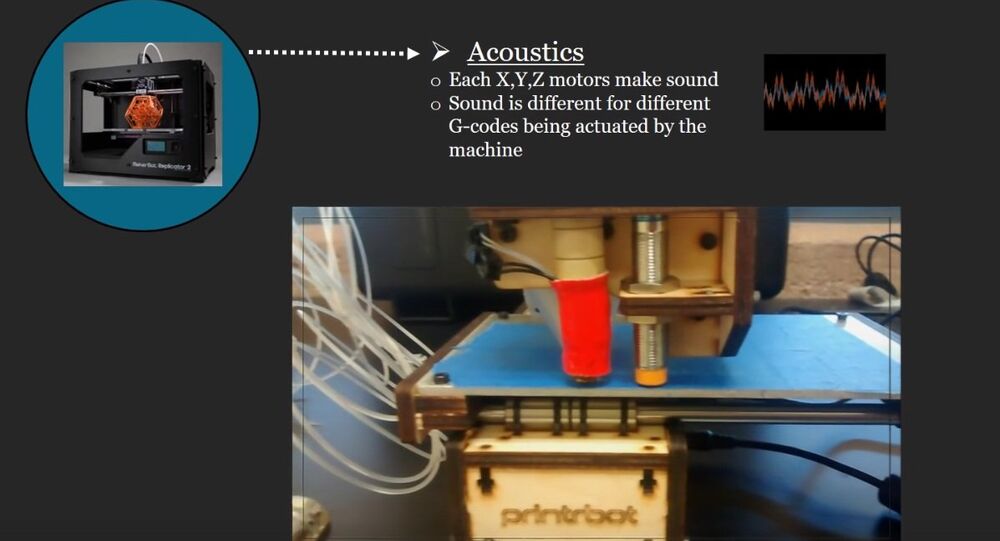 Researchers at the University of California have demonstrated that the work of a 3D printer can be copied simply by recording the sounds it makes when printing.

Australian Broadcasting Corporation (screenshot)
Australian Doctor Swaps Out Cancerous Tissue with 3D-Printed Titanium Parts
Researchers at the University of California, Irvine, have demonstrated that 3D printers are subject to significant security risks because it is possible to copy their work simply by recording the sounds they make with a smartphone.

"My group basically stumbled upon this finding last summer as we were doing work to try to understand the relationship between information and energy flows," said Mohammad Al Faruque, an electrical engineer and computer scientist at UCI, in a press release.

"According to the fundamental laws of physics, energy is not consumed; it's converted from one form to another – electromagnetic to kinetic, for example. Some forms of energy are translated in meaningful and useful ways; others become emissions, which may unintentionally disclose secret information."

3D printers emit acoustic signals that carry information about the precise movements of the printer's nozzle. Even an ordinary smartphone can be used to record these sounds, and then reverse engineer and re-create the object being printed.

Al Faruque's team demonstrated the process by copying the sounds of a 3D printer to duplicate a key-shaped object in the lab and achieved nearly 90 percent accuracy.

The research team has produced a short video presentation about their research, called 'Acoustic Side Channel Attack — Additive Manufacturing (3D-Printer).'

Al Faruque warned that workers in many manufacturing plants are not monitored for their smartphones or other recording equipment, and that companies stand to incur large financial losses if process and product information are stolen during the prototyping phases of development.

© Photo : Wikipedia/Bart Dring
Got 2 Hours and 47 Minutes Free? Print Yourself a Person
"Initially, we weren’t interested in the security angle, but we realized we were onto something, and we’re seeing interest from other departments at UCI and from various US government agencies."

Al Faruque suggested that to begin with, workers are prevented from carrying smartphones near areas of rapid prototyping where sensitive objects are being printed. He said that engineers should start thinking about ways to jam the acoustic signals emanating from 3D printers. The researchers' ideas include a white-noise device to introduce intentional acoustic randomness, or the deployment of algorithmic solutions.