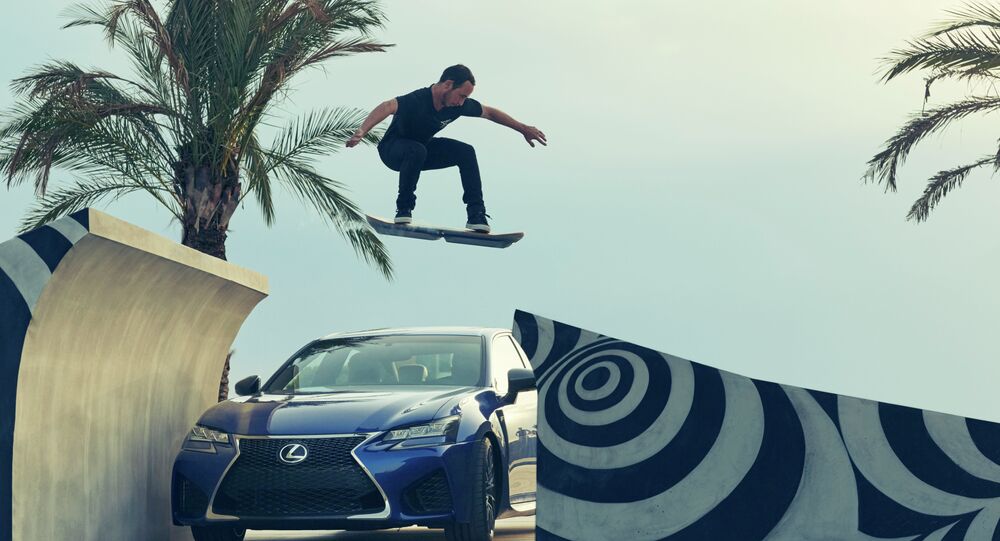 Toyota’s luxury car brand Lexus has released a video presenting its Hoverboard finally taking flight, with professional skateboarder Ross McGouran performing a couple of stunts, such as riding above water, swooping around a cement bowl, flying off a ramp and jumping above a Lexus; August 5 has been announced as the release date.

Science fiction has become a reality: Lexus has released the mini-movie series Slide, which features the ride on its Hoverboard, a maglev (magnetic levitation) board that flies slightly above the ground, just in time for Marty McFly’s trip into 2015 in the 1980's movie classic Back to the Future II.

The official unveiling of the Lexus Hoverboard in action marks the culmination of 18 months of design and technology planning and weeks of testing at a specially constructed “hoverpark” near Barcelona, according to the press release on the company’s official website.

The Lexus Hoverboard features two cryostats, reservoirs which contain superconducting material, kept at —197°C through immersion in liquid nitrogen. To use maglev technology that would make this sort of hoverboard work, you need a magnetic metal track, fitted with permanent magnets to achieve magnetic levitation. A normal concrete sidewalk won’t do.

For this purpose, Lexus converted a skate park in Barcelona into a temporary hoverboard skate park. On an existing track composed of cement and wood, the Lexus and Evico teams swooped in to lay down hundreds of small magnets.

“The magnetic field from the track is effectively ‘frozen’ into the superconductors in the board, maintaining the distance between the board and track – essentially keeping the board in a hover. The force is strong enough that the rider can stand and even jump on the board,” says Dr. Oliver de Hass, CEO of Evico.

The technology has already been used in rapid mass transportation systems such as the Shanghai Maglev Train. In Japan, the SCMaglev test train recently reached a top speed of about 600 kmph (375 mph).

Professional skateboarder Ross McGouran, who performed several stunts on the board, says he had to start over again as a beginner, learning to move without the help of any friction underneath.

“A skateboard has got resistance. Even with a surfboard, you've got the resistance of water,” says David Nordstrom, the general manager for global branding at Lexus International in Tokyo. “This is essentially floating on air. If you've ever tried to stand on a board, or something on water without any momentum, that's what this kind of feels like.”

The inventors, however, warn against expecting to see the board enter mass production: the company won’t even venture a guess as to how much the hoverboard would cost.