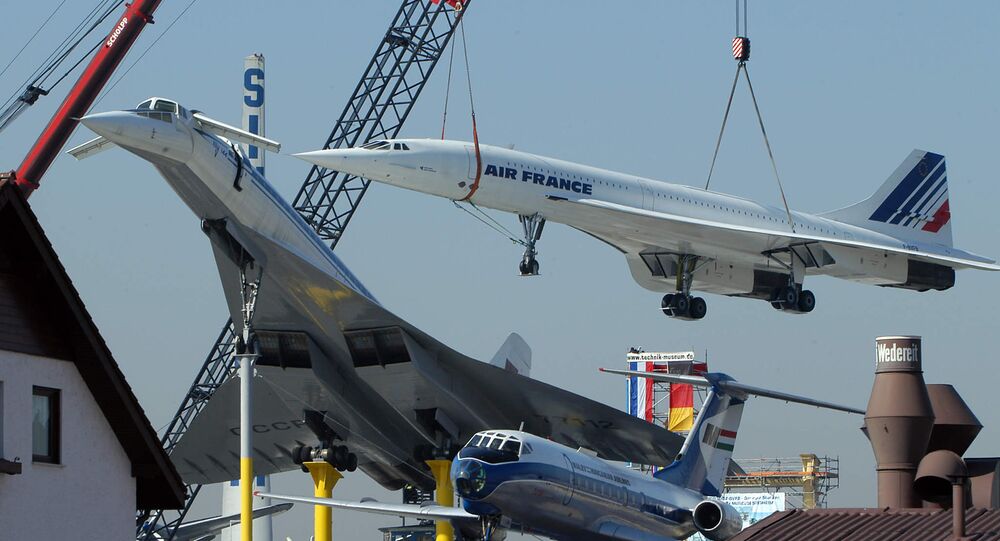 Two government-initiated projects for supersonic air travel, the French Concorde and the Soviet Tupolev Tu-144 remain in the dustbin of history despite their promise of travel several times faster than the accepted norm.

Fifteen years after the crash of the Concorde jet liner in Paris, the dream of supersonic air travel, one of the pinnacles of Cold War-era East-West competition reaching into the civilian sphere remains grounded on the covers of popular scientific magazines.

In the case of both the French Concorde and the Soviet Tu-144, however, the main motivation for the grounding of flights was more likely the lack of demand than their eventual crashes. The July 25, 2000 Concorde crash could be called the Hindenburg moment of civilian supersonic aviation, where one graphic incident led to the end of an era of supersonic travel for the elite despite many more deaths happening in other modes of travel at the time.

© AP Photo / Sergei Karpukhin
The TU-144, dubbed the Concordsky, hurtles skywards after 20 years in mothballs Friday Nov. 29, 1996 from a Zhukovsky airfield, some 30 kms. south of Moscow

Supersonic air travel had its roots in Cold War-era competition between the East and the West, in which the Soviet Union developed its liner at nearly the same time as France and Britain. Both planes made their maiden flights in 1968, with the Soviet Tu-144 outpacing the French Concorde by three months.

The roots of the Soviet project lay in a 1963 Soviet government decree to create a supersonic jet liner, which was completed in less than six years. The Concorde project was developed by French and British designers since the 1950s, under the decree of the British government. However, France and Britain were more concerned about competition with the United States at the time, making competition with the Soviet Union an end rather than the means for the project's motivation.

The lack of demand for the flights was largely fueled by the fact that plenty of considerably cheaper, subsonic flights already operated in the routes traveled by the liners, including the Trans-Atlantic. At the same time, the availability of regular flights created few incentives for last-moment high-speed travel that the liner provided.

The Tu-144, which was plagued by two incidents early in its history, the first miles from the site of the 2000 Concorde crash, was grounded in the late 1970s. Unlike the Concorde, the Soviet project did not have a class of ultra-rich passengers who would be interested in a supersonic travel option, with the price of tickets on the plane not even close to covering its flight and service expenses. The Tu-144 was later used for experiments, including by NASA in the 1990s.

The Concorde's reliance on ultra-rich passengers did allow it to survive for two more decades. The safety concerns brought upon by the 2000 crash did effectively end the attractiveness of that mode of travel for the ultra-rich, however, just as the crash of the Hindenburg did the same decades earlier.

While it is possible that supersonic air travel could be revived in the future, the busiest transatlantic routes together transported around 8.5 million passengers in 2010, slightly more than internal flights between Japan's Tokyo and Sapporo. The high utilization of the route, however, could eventually lead to a situation where, as with trains, high-speed travel would again become necessary.