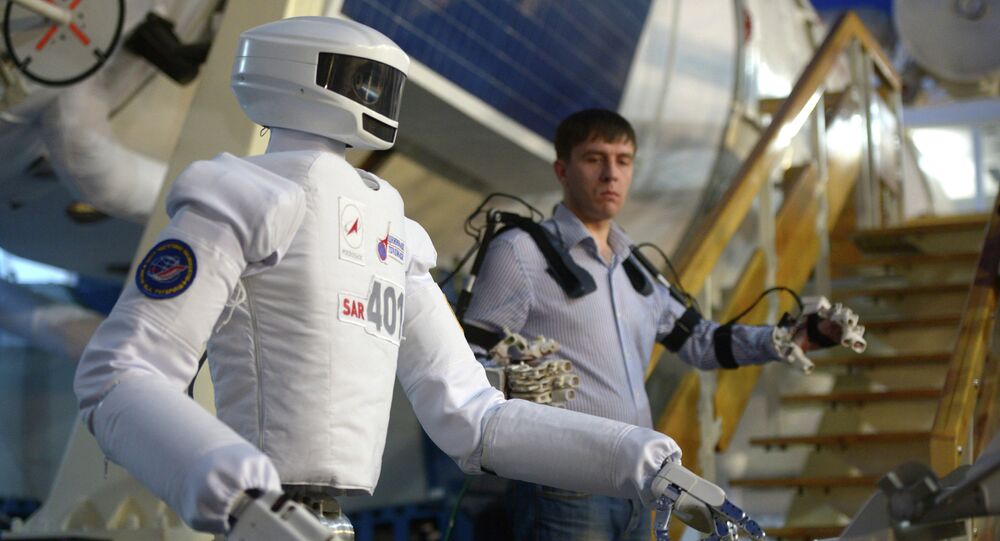 The Russian robot-android which is controlled through a wearable interface will be heading to the ISS soon, the head of the Gagarin Cosmonaut Training Center announced.

"We have a very big robotics program. This is one of the most important directions of the lab which we made together with the Russian Academy of Sciences' Computing Center. Many cosmonauts are working on the project, so the Russian robot will fit in at the space station."

The SAR-401, developed by JSC Android Technics, was first presented in Star City in 2013. Since then, the company has created a version for spaceflights which is capable of conducting around 50 operations in outer space. The robot fulfills functions through a wearable human interface.

© Sputnik / Michael Klimentyev
Combat Robot-Avatar Revealed to Russian President Putin
"The Canadian [Dextre] robot-manipulator proved itself perfectly at the ISS. However, a machine will never completely replace man. It has a tendency to break, while a human can fulfill tasks that are even outside their own capabilities, in both regular and emergency operations. But uniting the abilities of a robot and a human can give simply fantastic results," Lonchakov concluded.

In January 2015, a militarized robot-avatar was presented to Russian President Vladimir Putin at the Tochmash research institute, which is being developed to be able to fire weapons, travel across difficult terrain, operate vehicles and perform first aid.