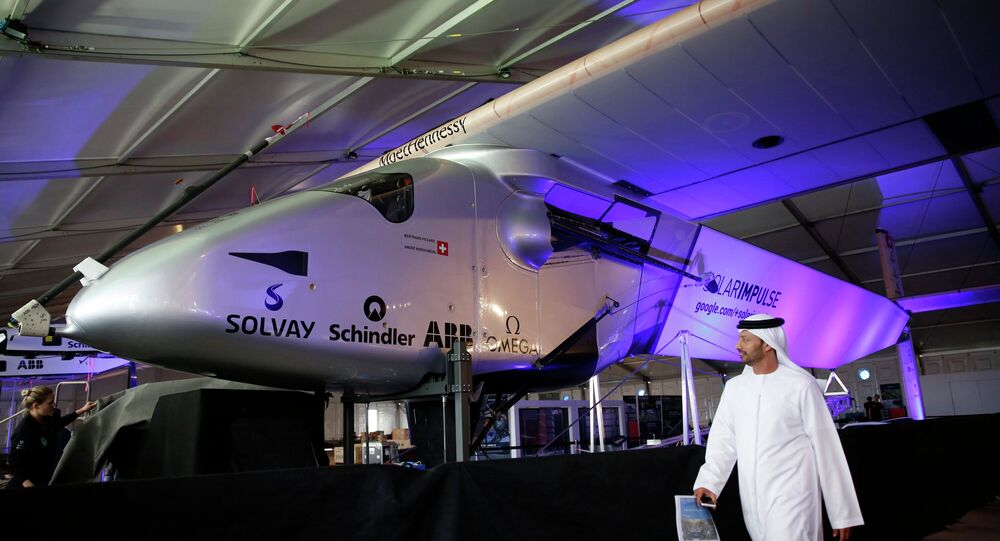 The solar plane is expected to depart from the United Arab Emirates and make a total of 12 planned stops along its roughly 35,000 km trip. Enthusisats will try to demonstrate that clean technology and renewable energy can completely substitute the traditional fuel.

© AFP 2020 / RABIH MOGHRABI
Dubai to Produce World's Cheapest Electricity at New Solar Plant
MOSCOW, January 20 (Sputnik) – Solar Impulse 2 (Si2), a plane powered by the sun, will attempt to fly around the world next month, seeking to prove that the future of aviation could be possible without a single drop of fuel, CNN reports.

The solar plane is expected to depart from the United Arab Emirates (UAE) and make a total of 12 planned stops along its roughly 35,000 km trip. The plane will stop in Oman, India, Myanmar and China, before crossing the Pacific Ocean with a touchdown in Hawaii. Next, the plane will have three stops in the continental United States, continue with a journey across the Atlantic, then land somewhere in Southern Europe or North Africa right before returning to Abu Dhabi, Business Insider says.

© AP Photo / Peter Dejong
World’s First Solar Road Opens in the Netherlands
Pilots André Borschberg and Bertrand Piccard will begin their slow, but steady journey somewhere in late February or early March. The trip will be undertaken at a slow speed. The entire journey will take over five months to complete, with flight speed no more than 50-100 kilometers per hour, CNN says.

"We want to demonstrate that clean technology and renewable energy can achieve the impossible," said Solar Impulse chairman Bertrand Piccard, as quoted by RTE.ie. He also added that Si2 would accomplish what no other plane in the history of aviation had ever achieved by flying five consecutive days without a single stop.

© Flickr / Consul Consolidated
India to Open Biggest Solar Panel Factory in $4Bln Joint Venture With US-Based Company
Si2 is the successor of Solar Impulse, a first solar plane that managed a 26-hour flight in 2010. Si2 has a huge wingspan, wider than a Boeing 747, but due to its cutting-edge design weighs only as much as a 4x4 vehicle, RTE.ie reports.

Aviation enthusiasts will have a chance to watch live video streams of the solar plane's progress on the firm’s website.

The two pilots have already set a few solar aviation records. In 2010, Borschberg operated the first manned solar plane and flew 24 hours straight on nothing, but solar power. In 2012, Borschberg and Piccard flew from Spain to Morocco and made the first sun-powered plane to fly from one continent to another, CNN reports.

Solar Energy Could Be Leading Energy Source by 2050: IEA Reports