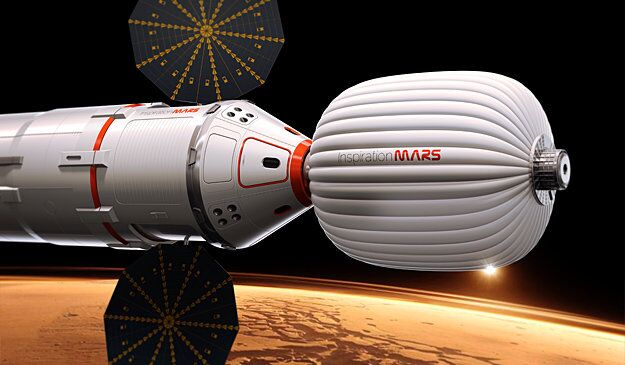 The world’s first space tourist is hoping to make history again, this time with a mission to Mars.

WASHINGTON, February 27 (By Sasha Horne for RIA Novosti) The world’s first space tourist is hoping to make history again, this time with a mission to Mars.

American multimillionaire Dennis Tito, who in 2001 paid a reported $20 million to ride aboard a Russian Soyuz spacecraft to the International Space Station (ISS), unveiled plans Wednesday for the first manned mission to Mars and back with a January 2018 launch date, an “extremely ambitious goal,” experts told RIA Novosti.

“The goal is to send two people, but to allow everyone else along for the ride,” said Tito at a news conference Wednesday at the National Press Club in Washington. “It is a challenging, yet attainable goal,” he said.

The mission dubbed “Inspiration Mars” has been described as “bold” and “risky” by both supporters and critics alike.

The so-called “fast, free-return” mission would begin on Jan. 5, 2018 when two crew members – a husband and wife astronaut duo – board a shuttle, approximately the size of a Winnebago, as private citizens to embark on a 501-day roundtrip flyby, passing within 100 miles (160 kilometers) of the Martian surface.

No attempted landing or orbit is scheduled, just a barebones, “Lewis and Clark" expedition style trip Tito said, comparing the minimalistic approach to the engine of a classic car. The crew will use the gravitational influence of Mars to “slingshot” the space vehicle onto a return course back to Earth.

Tito and his team are executing the project as a private, nonprofit endeavor under the umbrella of his Inspiration Mars Foundation.

Foundation officials said conversations are underway with several US commercial aerospace companies about potential launch and crew vehicles and systems.

“The mission will be built around proven, existing space transportation systems and technologies derived from industry, NASA and the ISS that can be available in time to support the launch date,” officials with the foundation said in a statement.

“The flyby architecture lowers risk,” said Tito. “With no critical propulsive maneuvers, no entry into the Mars atmosphere, and no rendezvous and docking,” he said.

But the risks that do exist could pose major problems experts said, including the safety of the crew against cosmic radiation and the short timeline leading up to the launch.

“The project is extremely ambitious, especially given the timeframe,” said Graham Candler, a professor in the department of Aerospace Engineering and Mechanics at the University of Minnesota.

“There is a lot of work that has been done with people being on the ISS for an extended period of time,” Candler said, but there are still risk factors he added. “You do go through bone loss, your muscles get deconditioned so you have to exercise extensively which requires a significant amount of space,” Candler said.

There is also a psychological factor. “Not many people can mentally withstand the travel, a half-year in each direction,” Candler said.

“Our primary goal is to keep the crew alive for just shy of a year-and-a half mission,” said Dr. Jonathan Clark chief medical officer of the Inspiration Mars Foundation.

And while radiation is a concern, “it’s not a show stopper,” Clark said. He added the project will consult with NASA about radiation protection.

Astronaut candidates will face a rigorous screening process that will take place within the next six to twelve months.

Tito, who spent eight days in space in 2001, said he personally committed two years of his own money to keep the Mars project alive. He would not comment on the overall cost, but said he expects the project to be funded primarily through private, charitable donations.

“Clearly there are risks associated with the mission,” Tito said. “But these are exactly the kind of risks that America should be willing to take in order to advance our knowledge, experience and position as a world leader.”