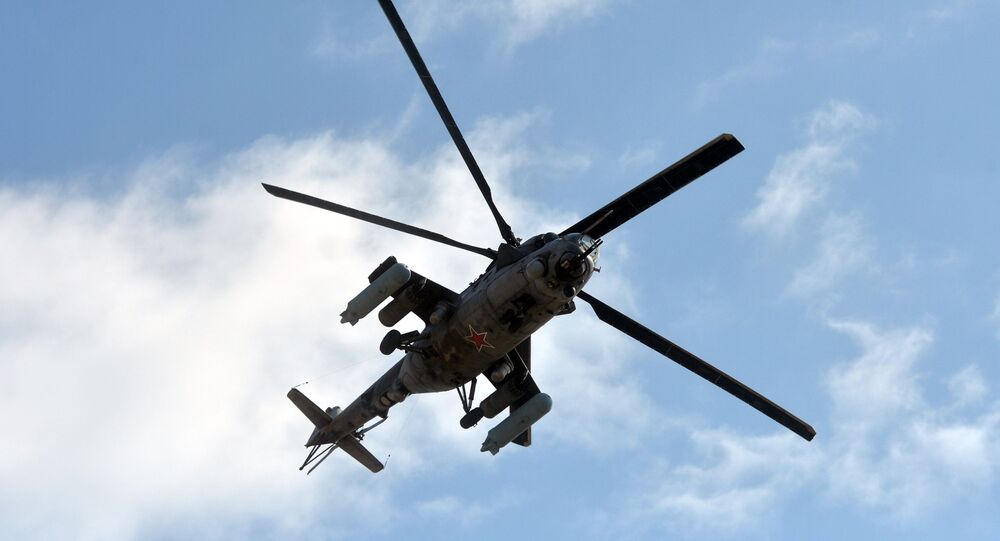 The incident took place amid ongoing hostilities in the nearby disputed Karabakh region between Azerbaijani forces and the forces of the self-proclaimed Nagorno-Karabakh Republic.

A Russian Mi-24 (NATO reporting name: Hind) military helicopter has crashed on the territory of Armenia near the village of Yeraskh after it was shot from the ground by unknown forces using a man-portable air-defence system (SAM), Russia’s Defence Ministry has stated. The crash was caused by a loss of control after a missile hit the aircraft, the ministry added.

Azerbaijan’s Foreign Ministry has admitted that its forces are responsible for the downing of the Russian helicopter and added that the attack was carried out "by accident" and was in no way directed against Russia. Baku assured that it is ready to pay compensation to Moscow for the loss.

"The helicopter was flying close to the Armenian-Azerbaijani border as active hostilities continue in the area of the Armenian-Azerbaijani conflict over the Nagorno-Karabakh region. The helicopter was conducting its flight when it was late and dark at a low altitude and outside of the range of [our] radars", the Azerbaijani ministry stated, citing tensions amid the Karabakh conflict as being the reason for the country's forces opening fire on the Russian Mi-24.

At the time of the attack, the helicopter was escorting a convoy of Russia’s 102nd military base, which is located in Armenia, as it was moving past Yeraskh, near the border with Azerbaijan's Nakhichevan Autonomous Republic. The incident resulted in the death of two of the helicopter’s crew members and another being hospitalised with moderate injuries.

The Defence Ministry previously stated that the command of the 102nd military base would be investigating the downing of the Russian helicopter, noting that the incident took place outside the zone of active hostilities that have been taking place in the Nagorno-Karabakh region since September 2020. Armenia’s Defence Ministry, in turn, promised to help Russia in probing the attack on its Mi-24 helicopter.

The Mi-24 helicopter gunship was first introduced into the Soviet armed forces back in 1972, with the Russian military continuing to use it after the dissolution of the USSR. The helicopter has been used in numerous armed conflicts around the globe and its Mi-25 and Mi-35 variants have been actively exported. It is also considered the second most widely used gunship in the world after the AH-64 Apache.