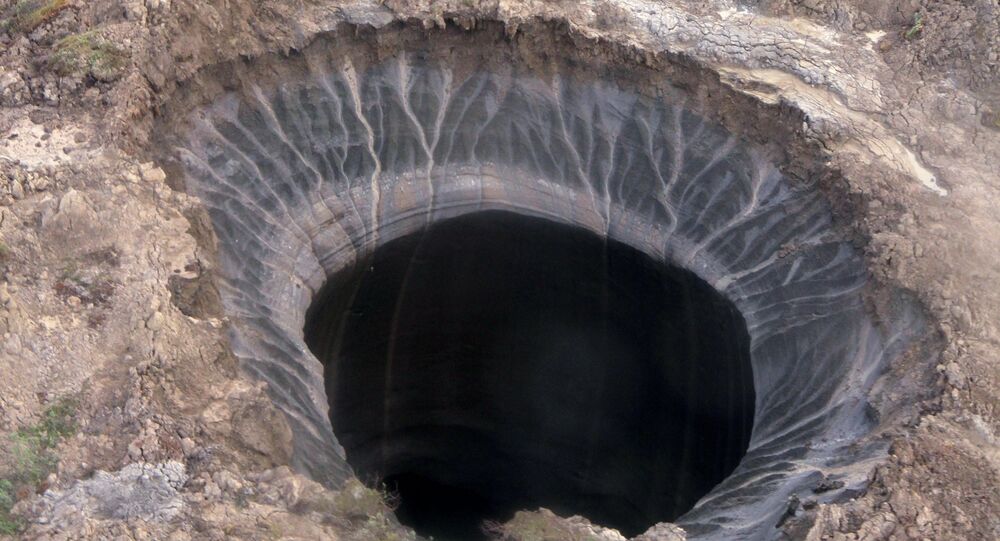 Some scientists believe the most plausible reason for such formations, which are frequent in proximity with the Arctic Circle, is a warming climate, which affects permafrost conditions. But another suggested explanation is an explosive release of deep-lying gases.

Another enormous, 165-foot (50-metre) crater has been spotted in Siberia’s Arctic tundra. The latest depression is nestled on the Gydan Peninsula, a plot of land to the east of the Yamal Peninsula.

Oleg Shabalin, who was first to report the find, believes the crater may have formed as a result of an abrupt release of methane, in common with other similar ones.

Such funnels of gases are "increasingly common throughout the tundra zone of Russia", he told The Siberian Times.

Scientists have meanwhile said this sludge-filled depression, which is about 65  feet (roughly 20 metres) deep, likely formed due to warm temperatures, with ice trapped in the permafrost thawing and making the soil collapse.

New giant 50-metre deep crater found in Yamal peninsula, Russia. Such funnels are believed to be caused by the build up of methane gas in pockets of thawing permafrost under the surface.

"We have been studying thermocirques for many years”, Marina Leibman, from the Earth Cryosphere Institute - part of the Russian Academy of Sciences, shared with The Siberian Times, adding that they became active in the year 2012, which was remarkable for its warm temperatures. She noted that they resemble huge landslides, semi-circular in shape, punctuated with blocks of ice.

Another giant crater forms in the Siberian permafrost - blocks of soil and ice thrown hundreds of metres from epicentre on the Yamal peninsula https://t.co/iWTvVlumfs pic.twitter.com/lXD8Be90en

“Earlier such thermocirques were observed near the sea, now they are seen deeper on land. They are associated with ice layers and warming”, the expert explained.

The biggest permafrost crater in the world is also located in Siberia, in the eastern part, and it has been described as the "gateway to the underworld”.

Being over 3,200 feet (975 metres) long and 300 feet (91 metres) deep, it has of late shown exponential growth: in July, Science Magazine reported that the rate of growth at this crater, called the Batagay Crater, had spiked and was growing by 29 to 45 feet per year.