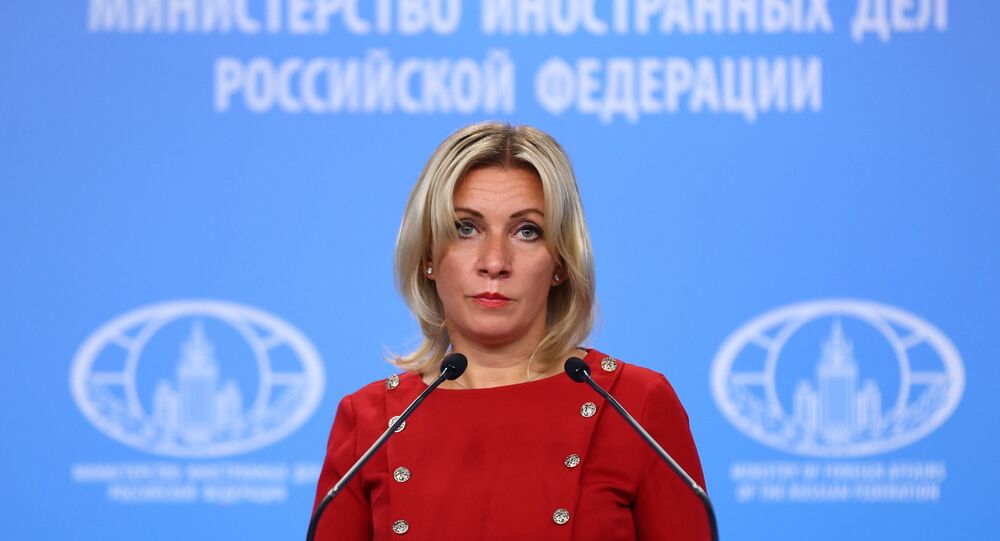 The Russian Foreign Ministry's spokeswoman has drawn the ire of top officials in Serbia after she posted a photo of the Serbian president's visit to the White House that was edited to add a picture of the iconic leg-crossing scene from “Basic Instinct”.

Maria Zakharova has clarified her Facebook post related to a Serbian delegation's visit to the White House, saying that it had been "wrongly interpreted".

In an update to her original post, the official stressed that she meant to condemn the unacceptable and arrogant attitude of the United States, noting that US officials regularly artificially create a semblance of their own exceptionalism.

The controversial publication contained a picture of Serbia's President Aleksandar Vucic seated on a chair opposite President Trump, who was sitting in an armchair at his desk.

Zakharova added a still from the iconic interrogation scene in Paul Verhoeven's 1992 thriller "Basic Instinct", in which the main female character Catherine Tramell, played by Sharon Stone, is sitting on a chair in a short, revealing white dress with her legs crossed.

The spokeswoman suggested that if one is invited to the White House and seated as if at an interrogation, then one should sit the way Stone's character sat in the movie.

"It does not matter who you are. Just believe me", Zakharova added.

The post, however, drew criticism from Serbia, with several top officials, including the Minister of Defence Alexandar Vulin, accusing Zakharova of insulting Belgrade.

Vucic, in turn, called her post primitive and lamented Moscow's lack of appreciation for Serbia, which always supports Russia.

The Serbian president was on a visit to the United States from 3 to 4 September to meet with Kosovo Prime Minister Avdullah Hoti. The sides signed a deal to normalise economic ties in the presence of US President Donald Trump.