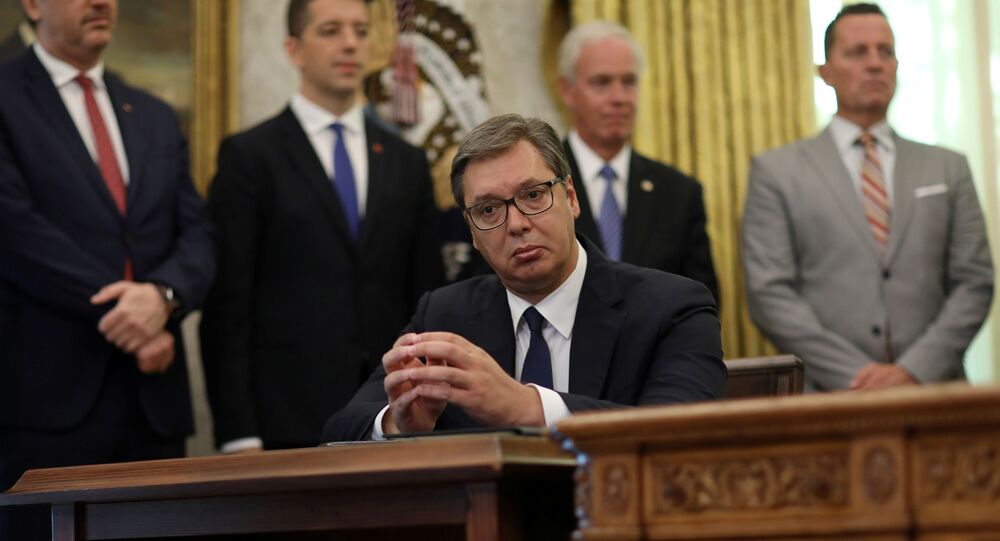 BELGRADE (Sputnik) - Serbian President Aleksandar Vucic revealed on Friday the content of an agreement on the self-proclaimed republic of Kosovo, signed with the United States at the White House.

Vucic stressed that the Serbian leadership and the Kosovars signed separate bilateral agreements with the United States and listed his country's points.

According to the president, the agreement is primarily focused on the economy and contains 16 clauses. Self-proclaimed Kosovo also signed a bilateral agreement with the United States.

"The Americans will be watching together with us the project to build a highway to Pristina, which will be important for Serbs living in Kosovo and Metohija", the president said.

He added that the parties agreed on the construction of a railway to connect the Serbian regions of Kosovo and Pristina with Belgrade via the Merdare checkpoint.

"It [the agreement] also talks about how various financial corporations and the Export-Import Bank of the United States will finance these and other projects", Vucic stressed.

According to the Serbian leader, representatives of Pristina persistently opposed the Balkan Mini Schengen Zone (cross-border trade and economic initiative).

Vucic also drew attention to the section of the agreement according to which the parties agreed together with the US Department of Energy and other government agencies on the division of energy resources of Gazivoda Lake in Kosovo.

This, according to the president, is about the energy produced by the hydroelectric power station and the water of the accumulation lake, which will be divided between Belgrade and Pristina.

Among the other points of the agreement is the mutual recognition of diplomas and professional certificates, launch of 5G networks from reliable suppliers, ensuring airport security controls for a future visa-free regime with the United States, protecting and supporting religious freedoms, which should ensure greater security for the clergy and facilities of the Serbian Orthodox Church. It also provides for a one-year moratorium on recognition of Kosovo independence from third countries, as well as on Serbian lobbying for the withdrawal of this recognition.

The Serbian delegation headed by Vucic is currently in Washington, where it held talks with Kosovo Prime Minister Avdullah Hoti. Earlier on Friday, the two Balkan states signed a deal to normalize economic ties in the presence of US President Donald Trump.