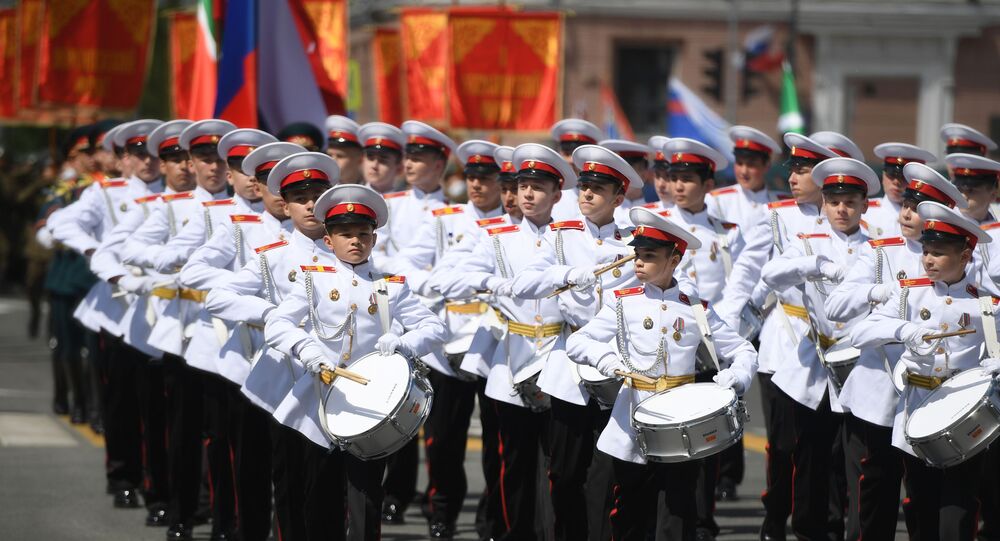 MOSCOW (Sputnik) - Russia is commemorating the 75th anniversary of the Soviet Union's victory over Nazi Germany in the Great Patriotic War of 1941-1945 by holding military parades and celebrations across the country, as well as in Russia's Khmeimim airbase in Syria and even at the International Space Station.

The World War II parade traditionally takes place in Russia on May 9. However, this year's event was postponed due to the pandemic to June 24, the day when the 1945 legendary Victory Parade was held.

More than 14,000 servicemen, over 200 pieces of historical and cutting-edge military equipment, as well as 75 aircraft were involved in the landmark military parade at Moscow's iconic Red Square. Some of the advanced hardware was showcased for the first time.

Russian cosmonauts Anatoli Ivanishin and Ivan Vagner were among the first ones to celebrate the Victory Day. The spacemen aboard the ISS thanked the Great Patriotic War veterans and participants of the 1945 historic military parade for the victory.

"Addressing the heroes of the war and the participants of the 1945 parade, we want to say: we remember, we are proud, thank you for the Victory," Vagner said in a video message.

"Exactly 75 years ago, on June 24, Soviet victorious soldiers and military equipment marched along the main square of our country, marking the long-awaited end of World War II and the victory of the Soviet people," Ivanishin noted in his turn.

According to Vagner, this year's Victory Parade in Moscow is not only a symbol of honouring the past but also expressing pride in continuing the glorious military traditions of the Russian army and demonstrating advanced technologies.

Among the first ones to hold this year's military parade was the Russian island of Sakhalin, with over 900 troops and 32 units of military equipment.

For the first time, the crews of the S-300 anti-aircraft missile systems and the latest radio communication systems installed on the Tiger armoured cars took part in the mechanized convoy.

The legendary Soviet Katyusha rocket launcher paraded through the city's main square. According to the Sakhalin authorities, the epidemiological situation made it possible to hold a large-scale event with viewers.

Some 4,500 troops attended the Victory Parade at the iconic Palace Square in the Russian city of St. Petersburg.

All the participants wore masks and gloves as part of the epidemiological measures against the spread of coronavirus, while military equipment was thoroughly disinfected.

Crews of the T-72B3 tanks, S-400 anti-aircraft missile systems, Msta-S self-propelled howitzer and Iskander-M tactical ballistic missile system took part in the parade, as well as the Mi-26, Mi-8 and Mi-24 helicopters and An-26, An-12 and Tu-134 transport planes flew over the Palace Square.

The event was attended by about 200 war veterans and the Leningrad siege remaining survivors. They were brought to the Palace Square by district administration staff in compliance with all necessary epidemiological safety measures.

The Russian city of Yekaterinburg held the military parade with more than 2,000 troops, over 100 pieces of cutting-edge and historical military equipment, as well as 23 aircraft and helicopters.

The military parade was opened with a historical reconstruction, during which 11 trucks with performers in Soviet military uniforms drove along the main square of Yekaterinburg.

Historical pieces of equipment from the Great Patriotic War, namely, the T-34-85 and Katyusha rocket launchers, were shown in the Victory Parade in Rostov-on-Don, the press service of the Southern Military District said.

In total, more than 3,000 military personnel took part in the military parade on the city's Theater Square. The convoy involved about 100 weapons and military equipment, including historical samples from the Great Patriotic War.

At the end of the parade, 45 planes and helicopters of four armies of the air force and air defence of the Southern Military District flew over the city.

About 1,500 members of the Baltic Fleet and other military agencies, as well as modern military equipment in service with the fleet, took part in the Victory Parade on the main square of the city of Kaliningrad along the Baltic Coast.

At the head of the convoy, consisting of 75 units of military equipment, the legendary T-34 tank drove through the Victory Square.

Meanwhile, the southern port city on the Black Sea, Novorossiysk, held the parade in the Tsemes Bay. The military event showcased the Kasimov small anti-submarine ship, the rescue tugboat SB-742 and the hydrographic vessel GS-402, as well as the patrol boat of the Border Service of the Russian Federal Security Service (FSB).

"I want to thank the troops of the Black Sea Fleet, which participated in the three hero cities (Sevastopol, Kerch and Novorossiysk) and in Simferopol. I received a report that everything went at the highest level," Osipov told reporters.

Servicemen and crews of the Black Sea Fleet ships, as well as historical and modern military equipment, took part in the Victory Parade in the largest Crimean city of Sevastopol.

The military parade and the mechanized convoy of the Black Sea Fleet were preceded by the ceremony of laying wreaths at the Eternal Flame memorial of the heroic defence of Sevastopol in 1941-1942.

The parade dedicated to the 75th anniversary of the WWII victory was held at Russia's Khmeimim airbase in Syria, with more than a thousand military personnel.

"We were honoured to participate in the parade dedicated to the 75th anniversary of the victory in the Great Patriotic War, on the territory of the Syrian Arab Republic together with the Syrian army. We are united … in our responsibility for the present, future and heroic past," Alexander Chayko, the interim commander of the Eastern Military District, said.

The grand parade and celebrations also took place at the Russian 201st Military Base in Tajikistan.

© Sputnik / Evgeny Haldei
75th Anniversary: What to Know About First WWII Victory Day Parade in Moscow
The crew of the Mi-8 helicopter performed a demonstration flight over the territory of the air-defence system. The pilots placed photographs of the WWII soldiers in the cockpit and on the fuselage of the helicopter.

The chopper took off from the Ayni airbase, 30 kilometres (18 miles) west of the Tajik capital of Dushanbe, and flew over the Russian parade ground at an altitude of 70 meters (229 feet) at a speed of 120 kilometres per hour (74 mph).