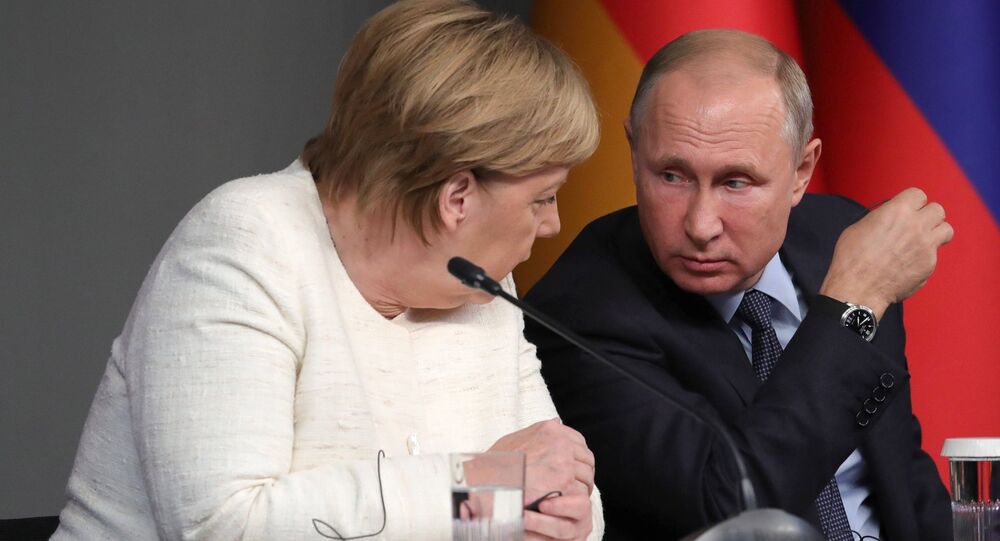 Libya's internationally-recognized prime minister, Fayez Sarraj, and Khalifa Haftar, who leads the opposition Libyan National Army (LNA) in eastern Libya, on Monday held talks in Moscow on the Libyan crisis. The negotiations were mediated by Russia and Turkey.

Russian President Vladimir Putin, in phone talks with German Chancellor Angela Merkel later in the day, noted the recent negotiations and discussed preparations for the upcoming conference in Berlin on the Libya settlement, according to the Kremlin's press service.

"Preparations for the international conference in Berlin on the Libyan settlement were discussed", the press service said in a statement.

On Sunday, the East-based LNA and West-based Government of the National Accord announced a ceasefire. On Monday, representatives of both sides met in Moscow to discuss a ceasefire agreement. Russia and Turkey were present as mediators. Hamid al-Safi, adviser to the speaker of Libya's eastern-based parliament, said that an agreement had not yet been signed.

The talks ended on Monday without a signing of a ceasefire agreement. The draft ceasefire agreement suggested that the participants of the talks would agree to "determine a line of battle contact that ensures a sustainable ceasefire, supported by the necessary measures to be taken for stabilizing the situation on the ground and normalizing daily life in Tripoli and other cities". In addition, the sides should choose members for a "5+5 military commission" which would "determine the line of battle contact between the opposing sides, monitor the implementation of the ceasefire, ensure the sustainability of the ceasefire", according to the draft agreement.

Lavrov on Monday stressed that progress has been achieved in the talks on Libya in Moscow.

The international Berlin peace conference, backed by United Nations Special Representative of the Secretary-General for Libya Ghassan Salame, is expected to take place on 19 January. Turkish President Recep Tayyip Erdogan said earlier on Monday that he was planning to attend the Berlin summit on Libya.

Erdogan and Putin held a meeting on 8 January, during which they agreed on a common stand on the Libyan crisis settlement, calling for a ceasefire beginning 12 January, and urging an inclusive peace process through intra-Libyan dialogue.

LNA leader Khalifa Haftar and GNA head Fayez Sarraj later asserted that they would stick to the truce, but promised to respond to violations.

© Sputnik / Andrei Stenin
Parliament in Libya's East Votes to Break Off Ties With Turkey - Report
Libya is currently experiencing severe political crisis and conflict stemming from the 2011 ousting of former leader Muammar Gaddafi. The GNA and the LNA -  aligned with the Tobruk-based government - are battling for political control. In December 2019, Haftar announced that the LNA would commence what they called a "final" offensive to gain control of the Libyan capital of Tripoli, currently under GNA control.

The Turkish parliament has ratified a November 2019 memorandum on military cooperation with Libya's GNA. Following the ratification, Ankara sent troops to the North African country to help the Tripoli-based government in its fight against rival LNA.