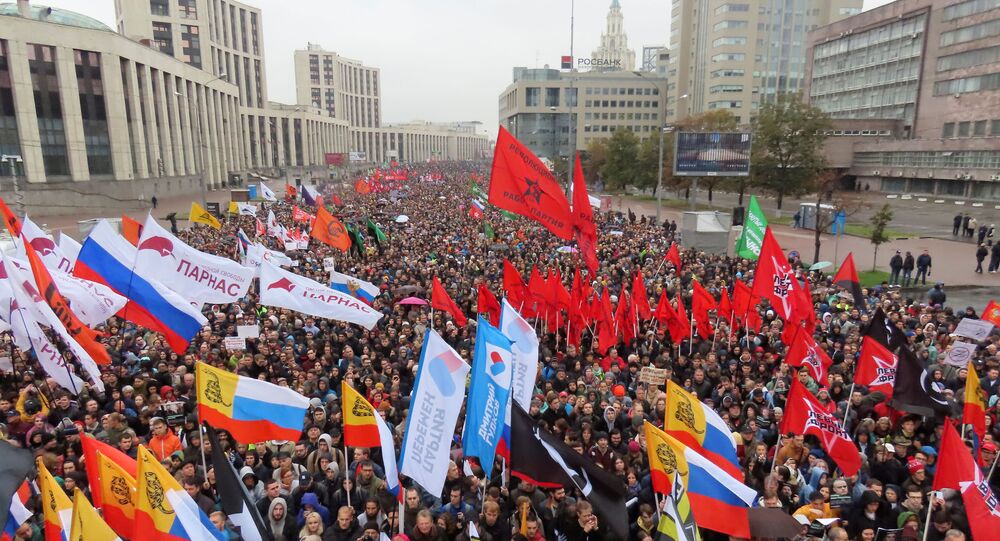 Rally in Support of Detained Protesters Takes Place in Moscow

The rally was authorised by Moscow authorities, who have blocked Sakharov Avenue and several adjacent streets to traffic from 8 a.m. until 7 p.m.

An authorised rally calling for the release of protesters detained at unauthorised demonstrations began in Moscow on Sunday.

"The authorised Moscow rally on Sakharov Avenue is attended by some 20,000 people," the city police said in a press release.

Earlier, a member of the unregistered Libertarian Party, Mikhail Svetov, wrote on his Twitter page that the mayor's office had greenlighted the demonstration. The rally has been joined by members of the party, as well as other opposition figures.

© REUTERS / TATYANA MAKEYEVA
People attend a rally to demand the release of jailed protesters, who were detained during opposition demonstrations for fair elections, in Moscow, Russia September 29, 2019.

The authorities have closed the avenue where the protests are taking place to traffic, as well as the adjacent areas.

The demonstration wrapped up in the late afternoon. Both police and the National Guard military personnel were present.

A wave of unauthorised protests in Moscow began in mid-July after the authorities barred opposition figures from participating in the 8 September election after they failed to gather a sufficient number of signatures of support.
Some 1,700 were detained by police as a result of the rallies. Several protesters have been charged with civic unrest and assaulting police.

'Revolution' in Russia? How The Economist Messed Up Fact-Checking in Article on Moscow Rallies