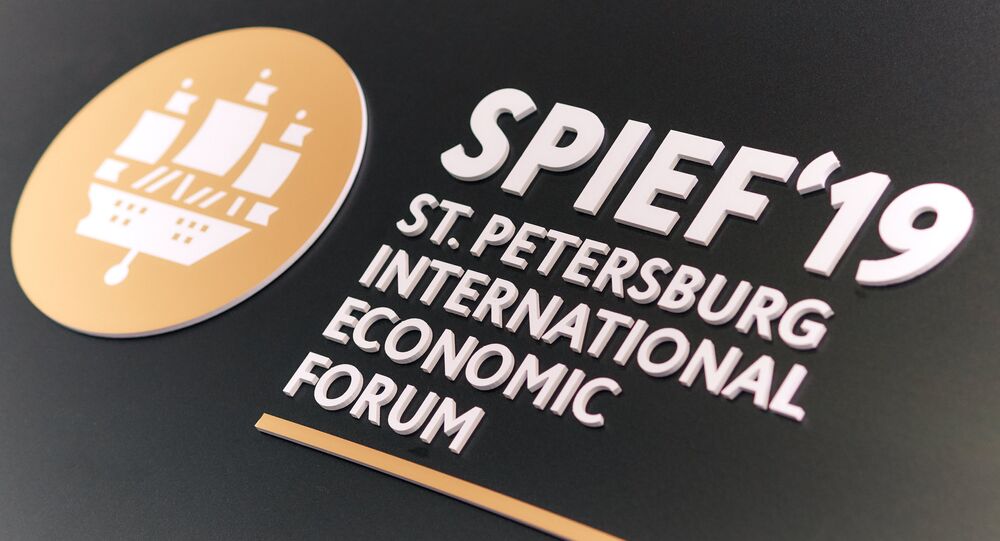 Delegations from nearly all EU countries, as well as senior officials from Cambodia, Vietnam, South Africa, Kenya, Egypt, the Central African Republic and Ivory Coast, came to St. Petersburg to take part in various business sessions. Here are some of the most important moments of the first day:

Speaking to representatives of international news agencies, Putin condemned sanctions against Venezuela and accused the US of fighting against the Venezuelan people.

“You can work with anyone – with acting government, with the opposition, but you cannot interfere in internal affairs. Especially, one must not apply sanctions,” Putin told journalists. “It is usually the millions of common people who have nothing to do with the government that suffer the most.”

© Sputnik / Vladimir Astapkovich
550 Deals Worth About $38Bln Signed at SPIEF-2018 - Russian Presidential Adviser
Putin promised to remove sanctions against the EU in response to similar actions by the European Parliament.

“We're watching the EU with interest and of course, hoping that something will change. If things do change, we will respond immediately and symmetrically remove economic restrictions of a retaliatory character implemented against the EU,” he said.

Russian Economy Minister Maxim Oreshkin and his German counterpart Peter Altmaier agreed to sign a declaration of intentions on a partnership for effectiveness, the Russian-German Foreign Trade Chamber told reporters.

This will be the first economic agreement signed between Moscow and Berlin since the Ukrainian Crisis of 2014.

The city of St. Petersburg used the first day of the forum effectively, striking almost $1.5 billion worth of agreements for the city, according to the governor’s press office. Approximately $1.3 billion will be invested by Russian Railways with money being directed towards the renovation of the entire St. Petersburg railway junction.

Some $153 million will be invested by US-based EKS Group toward the building of a perinatal centre in St. Petersburg.

Approximately $30.6 million will be invested by UK-based International Food Market, Ltd. with funds going to the construction of an agricultural wholesale distribution centre, the governor’s office said.

“I hope our Ministry of Energy will conduct negotiations with Oil Ministers of Saudi Arabia and Iraq and will come to a weighed position,” Alekperov said.

The St. Petersburg Economic Forum will continue for two days and conclude on Saturday evening. The forum has been held since 1997. Over the last 20 years, SPIEF has become a major global platform for members of the business community to meet and discuss key economic issues facing Russia, emerging markets, and the world as a whole.

Delegations of two countries attended the opening ceremony of the Second Russian-Chinese energy Business Forum as part of SPIEF.

“Cooperation between China and Russia is continuing and intensifying.

“Russia is a major supplier of hydrocarbons to global markets, and the figures for 2018 show that Russia has become China’s largest partner in the supply of oil, coal, and electricity”, Russian Deputy Prime Minister Dmitry Kozak said.

Rosneft CEO Igor Sechin noted that Sino-Russian hydrocarbon cooperation increased amid growing pressure from Western nations, which he called a sign of weakness.

“Russian-Chinese cooperation is developing amidst a new flare-up in trade wars. The main reason for trade wars are the weakness of other partners and their attempt to gain a unilateral advantage by diminishing competition”, Sechin said.

International Economic Forum to Kick Off in St. Petersburg