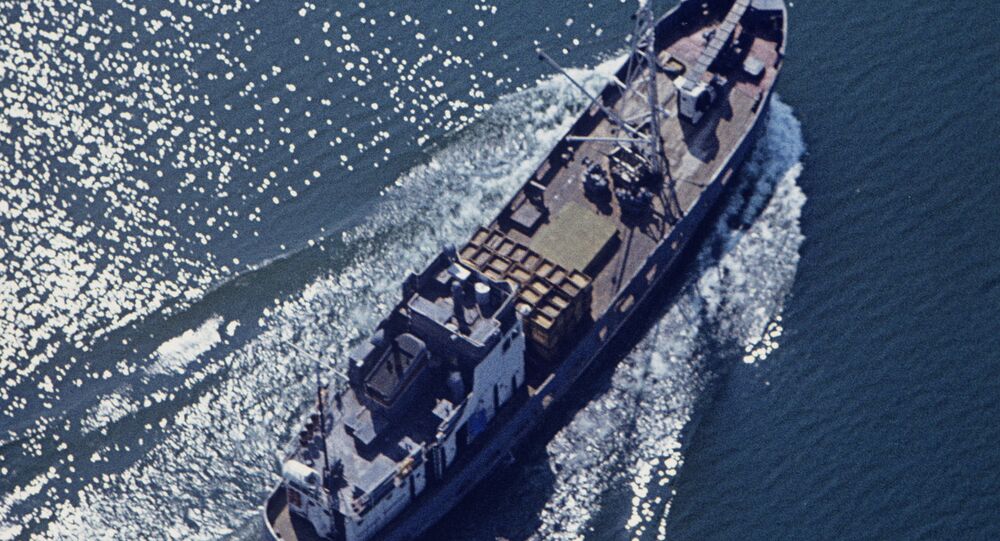 MOSCOW (Sputnik) – Claims about detentions of foreign vessels by Russia in the Sea of Azov, allegedly lasting for multiple days, is blatant lies made up by Kiev, Washington and Brussels, Russian Deputy Foreign Minister Grigory Karasin said, adding that the Russian border authorities were working to ensure smooth traffic in the sea.

"Claims about hours-long or even multiple-day detentions of vessels is blatant lies […] Our border guards are working to ensure that the channel works smoothly and without disruption both from the Black Sea side and from the side of the Sea of Azov […] There is no talk about any deliberate detentions. All this has been made up in Kiev, Washington and Brussels," Karasin said in an interview with Russia’s Kommersant newspaper published on Thursday.

© AP Photo / Vadim Ghirda
'Created Out of Thin Air': Kiev, West Invented Azov Sea Issue to Pressure Moscow - Russian FM
The required checks by the Russian border guards in the Sea of Azov are held only at the entrance to the Kerch Strait and do not usually exceed three hours, according to Karasin. Longer checks could only be caused by weather conditions or specific security requirements, the official added.

The diplomat noted that he had discussed the situation around the Sea of Azov with Helga Schmid, the secretary general of the European External Action Service (EEAS), noting that it was "strange" that this topic was further pursued by Brussels.

The crisis around the Sea of Azov erupted this year after Ukraine detained a Russian vessel there prompting Moscow to boost controls in the area. The tensions further escalated in October when the Ukrainian parliament passed a draft law authorizing Kiev to expand maritime controls by 12 nautical miles off its southern coast, allegedly in an effort to counter smuggling in the Black Sea.

The dispute has been brought to attention of the European Union. The EU neighborhood policy commissioner, Johannes Hahn, said during a trip to Kiev that the issue was high on the agenda.

On Monday, London said following an EU Foreign Affairs Council meeting, that Russia allegedly disrupted the passage of ships in the Sea of Azov by carrying out stop and search operations for vessels arriving at and leaving from Ukrainian ports in the area.