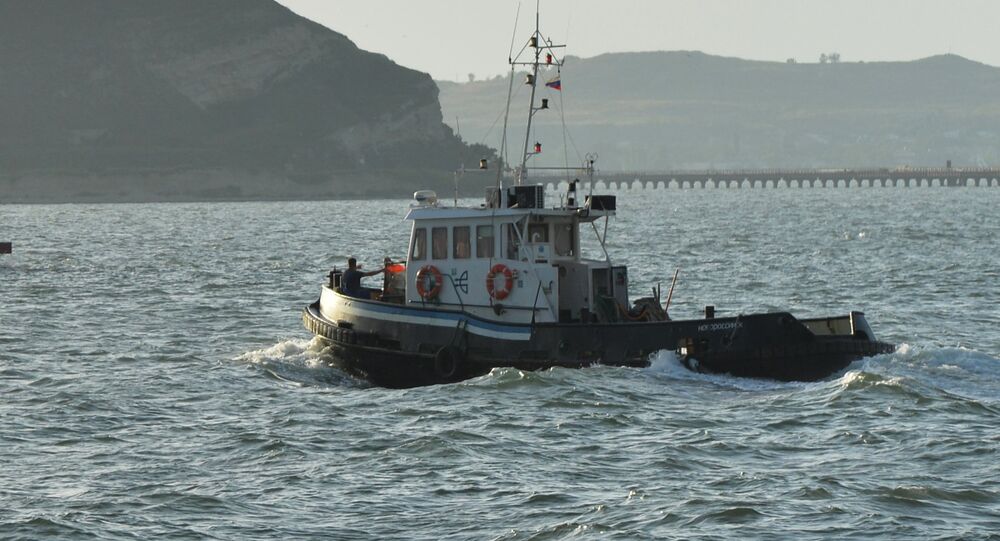 LONDON (Sputnik) - The United Kingdom calls on Russia to stop denying Ukrainian and international ships access to the Sea of Azov, the UK Foreign Office said in a statement, released on the night into Tuesday, following a EU Foreign Affairs Council meeting.

Russia and Ukraine are in a row over the inland Sea of Azov that they share, with both sides accusing each other of detaining each others' ships illegally. However, no specific example of delaying or preventing access for a ship by Russia has been cited in the UK Foreign Office's statement.

"Russia’s continued disruption of ships attempting to access Ukrainian ports in the Sea of Azov is destabilising the regional economy. Restrictions on freedom of passage have been accompanied by an increase in Russia’s military presence in the sea," the statement read.

© AP Photo / Sergei Polyakov
Ukraine to Build Naval Base Along Turbulent Azov Sea
According to the office, Russia disrupts Ukrainian and international shipping in the Sea of Azov via conducting stop and search operations for cargo ships arriving at and leaving from Ukrainian ports in the sea.

"This is causing delays, significant increases in shipping costs, and a reduction in income to Ukraine’s ports. So far, more than 200 vessels have been affected, in a policy which is damaging Ukraine’s economy and undermining its sovereignty," a spokesperson of the office said, as quoted in the statement.

Tensions between Russia and Ukraine in the Sea of Azov rose this year after Ukraine detained two Russian ships for port calls in Russian Crimea, which Ukraine considers as its territory. Russia described the move as "maritime terrorism" and ramped up patrols off its Azov coast, prompting Ukraine to accuse Russia of illegal searches.

© AFP 2021 / DANIEL MIHAILESCU
US to Avoid Sea of Azov, to Keep On Operating in Black Sea Region - Admiral
The crisis escalated in October, when the Ukrainian parliament passed a draft law authorizing Kiev to expand maritime controls by 12 nautical miles off its southern coast, allegedly in an effort to counter smuggling in the Black Sea.

The dispute has been brought to attention of the European Union. The EU neighborhood policy commissioner, Johannes Hahn, said during a trip to Kiev that the issue was high on the agenda.