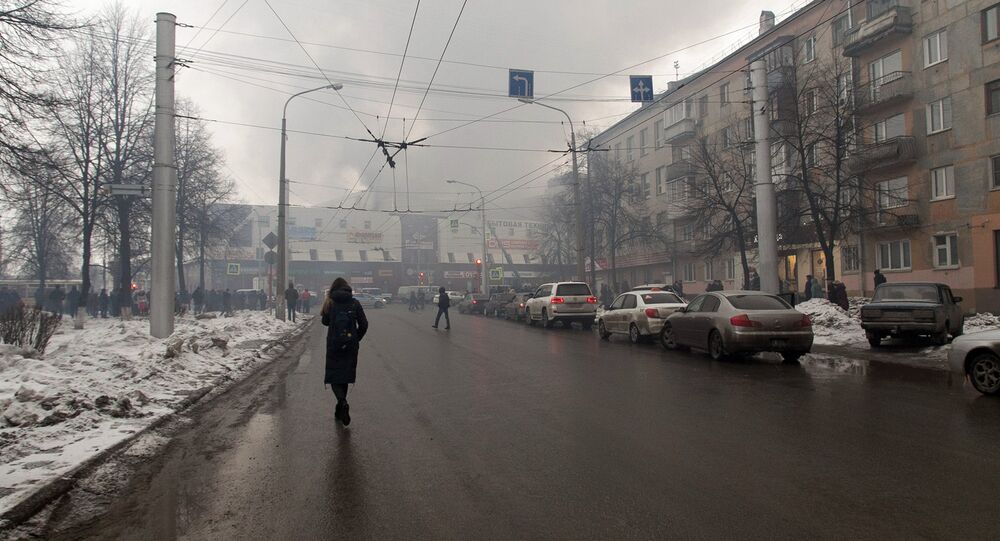 A fire broke out in the “Winter Cherry” shopping mall in the Russian city of Kemerovo on Sunday, killing at least 64 people, many of them children.

People are coming to the scene of a deadly fire in Russia's Siberian city of Kemerovo to express their condolences and commemorate those, who didn't manage to escape the building devoured by the fire. Flowers and toys cover the place of the incident in remembrance of the horrifying number of innocent children who lost their lives.

The first reports of the fire surfaced on Sunday afternoon; the police encircled the area and began evacuating people. The emergency services reportedly deployed some 15 fire teams, while the national center for crisis management announced that over 660 people were engaged in emergency response activities. Witnesses have insisted that fire alarms in the trade center, which was completely packed, failed to go off, causing people to panic and rush through narrow corridors in a movie theater and children’s playground, filled with black smoke; some jumped out of windows to save their lives.

© Sputnik / Alexander Patrin
Blackened in Smoke: Siberian Shopping Center Caught on Drone Camera (VIDEO)
The head of the city’s fire department Sergei Yakovlev said that the blaze had spread via flammable thermal insulation that complicated the process of extinguishing the inferno.

The official cause of the conflagration has yet to be determined, although reports suggest that it could have been started by a child misusing a cigarette lighter or malfunctioning electrical wires.

In an interview with the channel Rossiya 24, child ombudsman Anna Kuznetsova has suggested that the reason for the fire was negligence of security norms.

"Negligence is the cause. All norms are written. But the way we treat these [security] norms is the catastrophic cause of the tragedy we have witnessed today," Kuznetsova said.

Russia’s Investigative Committee has launched a criminal investigation into the case, having reportedly arrested four suspects, including the head of the management company, servicing the shopping mall.

Speaking about the tragedy on March 26, Kremlin spokesman Dmitry Peskov stated Kremlin had no information on the causes of the fire in the shopping center.

The spokesman went on by saying that it was not correct to make any claims against Kemerovo Region Governor Aman Tuleyev over the fact that he reportedly had not visited the site of the tragic incident.

An employee of a private security company (PSC) switched off an alarm system in a shopping mall in the Siberian town of Kemerovo, where a major fire claimed lives of more than 60 people, Russian Investigative Committee spokeswoman Svetlana Petrenko said Monday.

"The issue of detention of the fifth suspect, a PSC employee who turned off an alarm system after receiving a signal about the fire, is being discussed. Serious violations were committed both during the shopping center's entry in service and in the process of its work. Fire exits in the shopping center were blocked," the spokeswoman said, as quoted in the committee's Telegram channel.

As a source in the local emergency service told Sputnik, the bodies of at least 60 of them have been recovered from under the debris.

According to recent data, confirmed by the Russian Investigative Committee, the death toll has risen to 64 people. Earlier, a source with emergency services reported that 69 people were still missing, including 40 children.

"According to preliminary figures, a search for 41 children is ongoing," the emergency center reported.

"Governor Aman Tuleyev declared mourning throughout the Kemerovo region on March 27, 28 and 29," the spokesperson said.

Speaking about the accident, Russian Deputy Emergencies Minister Vladlen Aksyonov stated that up to the present moment a total of 17 victims of the deadly fire have been identified.