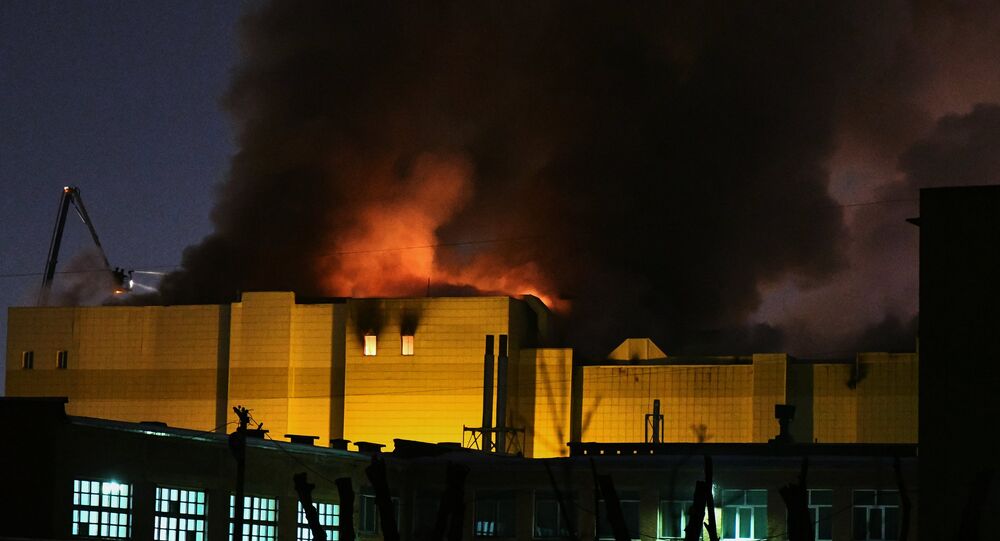 A fire broke out Sunday in the 'Winter Cherry' shopping mall in the Russian city of Kemerovo, killing at least 48 people, including many children. The tragedy saw a social media blast as people shared their stories as well as video and photos from inside the building.

The first reports of the fire began around noon on Sunday, and police cordoned off the area and began evacuations. Preliminary reports revealed that four children had been killed due to gas poisoning.

According to the latest data, provided by the national center for crisis management, 48 people died in the blaze. Earlier, a source with emergency services reported in the evening that 69 people were still missing after the fire, including 40 children. Later, the Russian Investigative Committee updated the death toll to 37 and reported at least 45 people injured. According to a Sputnik source in the emergency services, "53 bodies have been found at the site of the fire."

Shortly after the fire started, social media was filled with witness reports, as many reported that fire alarms failed to go off as people rushed in panic through thick clouds of smoke, some jumping out of windows.

"This is horrible," annazare4neva wrote, "Ordinary holiday. The whole family decided to go to the cinema. Got all dressed up and set off. The trade center was full of people. Hardly found a parking space…" "In the middle of the movie, a door shut out and someone screamed 'Fire! Fire!.'" "We could not hear any alarm. The crowd rushed through the single narrow pass." "Black smoke filled children playground and a movie hall. We could not breathe…There were many children crying."

© Sputnik / Maxim Kiselev
WATCH: Disturbing Footage of Deadly Russian Trade Center Fire
After the death toll was updated to 37, Russian Emergencies Minister Vladimir Puchkov said that firefighters had not been able to reach several rooms in the mall.

"The firefighters and rescuers are working at the risk of their own lives… there is no access to certain rooms [of the mall] because of high temperatures," Puchkov said.

"THIS IS HORRIBLE! People are trapped inside the 'Winter Cherry' trade center! Trying to break the doors open!" aleksakalash wrote in an Instagram post. "I don't know did they make it or not! This video has been sent to me 2 hours ago via WhatsApp!"

At the time police started evacuations, there were reports of 100 people trapped inside the burning building, alongside reports of people sending short messages to their friends and relatives from the trade center.

Several people shared on social media a screencap with a DM message allegedly sent by a 13-year-old girl who wrote “We are on fire. Possibly, farewell.”

A group of children from a school in the village of Terescevsky in the Kemerovo region were at a movie theatre near the reported epicenter of the blaze when the fire broke out, local media reported. They were reportedly taken to the entertainment center and cinema inside the trade center.

© Sputnik
37 People Dead, 40 Children Missing After Shopping Center Fire in Russia
There were also reports of children calling from the movie theatre inside the trade center to relatives. "Tell mom that I loved her. Tell everyone that I loved them," a 12-year-old girl Vika told her aunt before closing the connection on the phone, Russian KP outlet reported. The Emergency Ministry reported later that two of the movie theatre's rooms collapsed during fire.

Photos of missing people, posted by relatives have begun to appear on social media.

Crisis management spokespersons reported Monday morning that that over 40 children were missing in the disaster. "According to preliminary figures, a for 41 children is ongoing," the Russian Emergencies Ministry's National Crisis Management Center told the Rossiya 24 broadcaster.

According to the latest data, over 660 people are engaged in emergency response activities. Russian Deputy Emergencies Minister Vladlen Aksyonov said that "at the moment the firefighting process is ongoing, the interfloor constructions… could collapse".

Many videos posted on the internet show the burning building.

Russian social media has shared posts expressing condolences to friends and relatives of those who died in the fire.

Turkish Foreign Minister Mevlut Cavusoglu on Monday also expressed condolences to Russia over the deadly mall fire. "I would like to extend my condolences to the Russian nation and state. I wish patience to everyone, who lost their relatives in the blaze," Cavusoglu said on its Twitter account.

Russian Prime Minister Dmitry Medvedev listened to the reports of cabinet members about the steps taken in context of  the fire in the shopping mall in the Siberian city of Kemerovo, Medvedev's spokeswoman said.

According to Natalya Timakova, Russian Deputy Prime Minister Olga Golodets informed Medvedev about the supportive measures that would be taken to back the victims of the blaze and the families of people killed in the fire.

Local authorities announced later that they would allocate 1 million rubles ($17.510) to each family of the victims of the tragedy.

Spokesperson of Russian Investigative Committee reported that three people including the head of the managing company, which has been servicing the trade center, were in custody amid investigation into the tragedy.