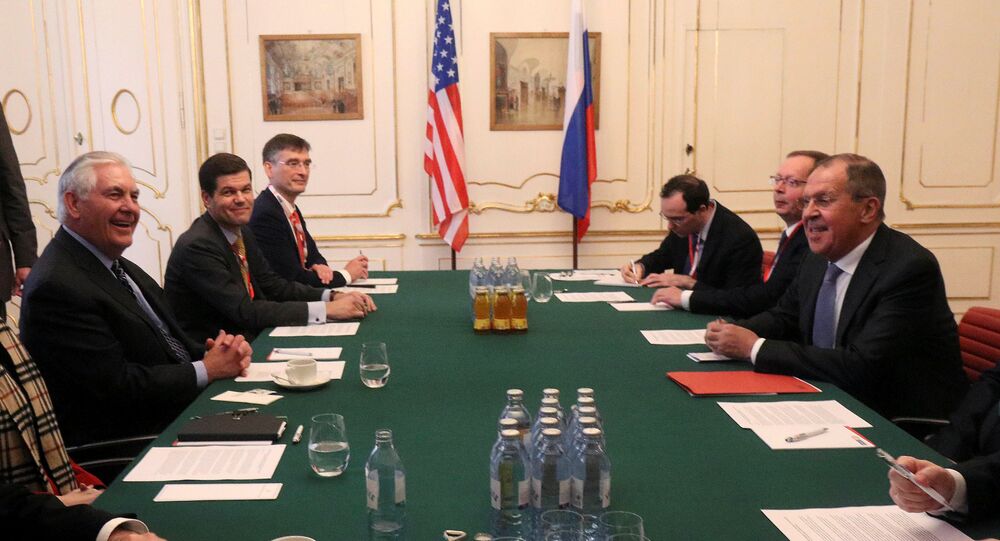 The Foreign Minister of Russia and the US Secretary of State discussed a number of topics during their meeting at the OSCE summit in Vienna. The main topics of their discussions were Ukraine, Syria and North Korea.

The two cabinet-level officials met during the summit of Foreign Ministers of the Organization for Security and Co-operation in Europe (OSCE), one of the few organizations that both the US and Russia are members of.

According to the Russian Foreign Ministry press release, the two officials discussed the next steps in resolving Syria's civil conflict through establishing a negotiation process that would incorporate all of the Syrian political powers. The negotiations can go on at various sites, including the Geneva conference on Syria and the upcoming Syrian National Dialogue Congress that will take place in Sochi.

"Sergey Lavrov underscored that only Syrian people have right to decide on their own future. The state sovereignty of the Syrian Arab Republic and its territorial integrity must be respected strictly," the Russian Foreign Affairs Ministry's press release reads.

Addressing Ukraine, Lavrov once again stated that the Minsk accord of February 2015 has no alternatives and must be fulfilled. He insisted that it is Kiev that has to implement the points of the agreement.

Lavrov and Tillerson found some common ground regarding North Korea, agreeing that Pyongyang must strictly abide by UN Security Council resolutions. Meanwhile, Sergey Lavrov underscored that the escalation of tensions brought about by aggressive US rhetoric and military preparations in the vicinity of the Korean Peninsula, is unacceptable.

A fresh addition to the agenda is the issue of pressure on the Russian media and diplomatic staff. Lavrov pointed out that US attempts to recruit Russian journalists for intelligence-gathering purposes was unacceptable.

The issue had been raised earlier by Russian Foreign Ministry spokeswoman Maria Zakharova.

"Recently Russian journalists, including those in the United States, have come under great pressure from the special services, notably through attempts at recruitment," she said during a briefing.

Zakharova claimed that one Russian journalist in the United States, whose name wasn't disclosed, was pressured to cooperate with US intelligence agencies first through offers of cooperation, then through bribes and psychological tactics, and when those did not work — through threats.