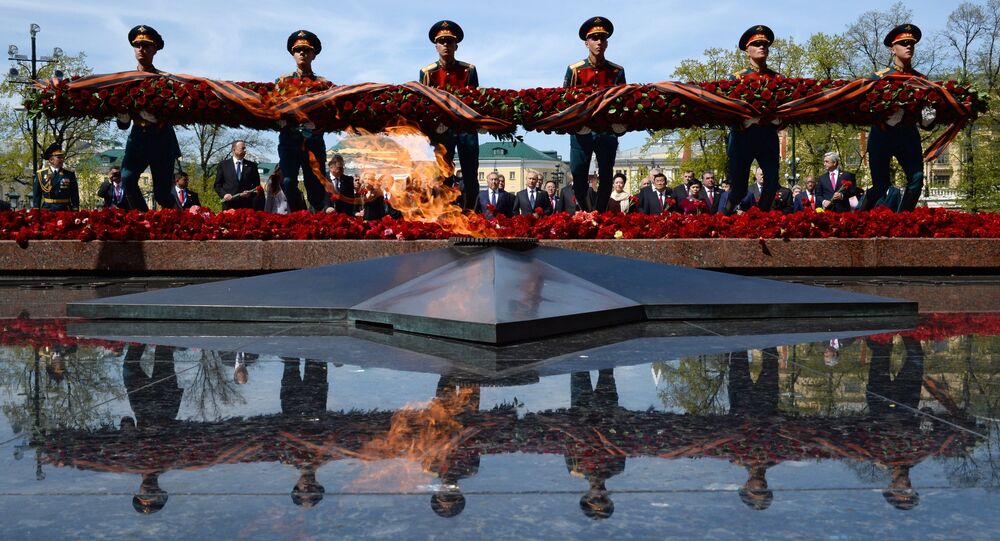 'Your Deed is Immortal': Russia Marks Day of the Unknown Soldier (VIDEO)

Every December 3, millions of people across Russia and the former Soviet republics mark the Day of the Unknown Soldier.

The Day of the Unknown Soldier is a new commemorative date established to perpetuate the memory of Soviet soldiers who died fighting for their country and whose names remain unknown.

Exactly 51 years ago today, on December 3, 1966, the remains of an unknown soldier who died defending Moscow in 1941 were taken from a mass grave and interred in a solemn ceremony under the Kremlin Wall in Moscow.

© Sputnik / Sergey Guneev
Putin Lays Wreath at Tomb of Unknown Soldier in Moscow
The Tomb of the Unknown Soldier memorial complex was unveiled there the following year and the an eternal flame was lit as a sign of undying gratitude and respect for the millions of Soviet men and women who sacrificed their lives during and after WWII.

The inscription on the granite tile reads: “Your name is unknown, your deed is immortal.”

In October 2014, the State Duma passed a law establishing the Day of the Unknown Soldier, and President Vladimir Putin signed a corresponding decree on November 5, 2014.

However, the Day of the Unknown Soldier isn’t just a day of remembrance for those who fell during the Second World War. It commemorates all those killed and missing during the armed conflicts Russia has fought in ever since.

“This is a tribute to all those who died at the front, to the memory of every soldier, who defended our motherland, but whose graves are unknown, even to their relatives and descendants. Nevertheless, they are all heroes of our country. They live on in our collective memory, so it’s important to cherish and to pass on this memory from generation to generation.  No one is forgotten, nothing is forgotten,” the 2014 law on the establishment of the Day of the Unknown Soldier stated.

Putin Lays Wreath at Tomb of Unknown Soldier in Moscow