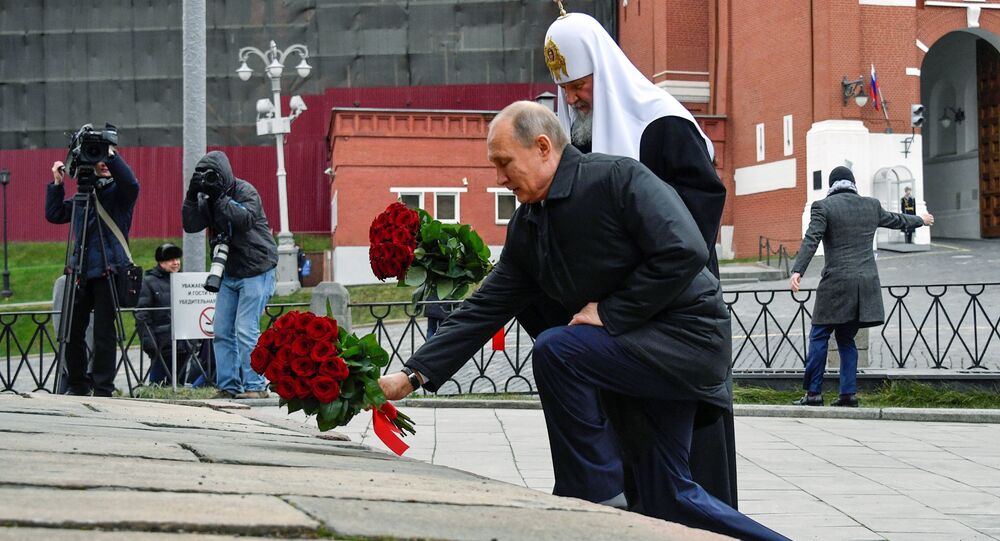 On Saturday Russia is celebrating National Unity Day - a holiday, which was established in commemoration of the heroic deed of Russian people, who united in the early 17th century in order to defend their Motherland from invaders.

MOSCOW (Sputnik) — Russian President Vladimir Putin on Saturday laid flowers at the monument to Kuzma Minin and Dmitry Pozharsky on the Red Square on the occasion of Russia's National Unity Day.

Patriarch Kirill of Moscow and All Russia, Chief Rabbi of Russia Berel Lazar, leader of the Buddhist traditional Sangha of Russia Damba Ayusheev, Russian Grand Mufti Rawil Gaynetdin, as well as the members of the Presidential Council for Inter-ethnic Relations and representatives of youth organizations also attended the flower-laying ceremony.

After the ceremony, the Russian president held talks with religious figures and representatives of public organizations as well as took part in a photo shoot with youth activists.

READ MORE: Everything You Want to Know About National Unity Day in Russia

The National Unity Day was established in memory of the events of 1612, when Minin and Pozharsky led a volunteer army to liberate Moscow from Polish occupation. Historically, it was connected to the end of the Time of Troubles in the 17th century.

Everything You Want to Know About National Unity Day in Russia