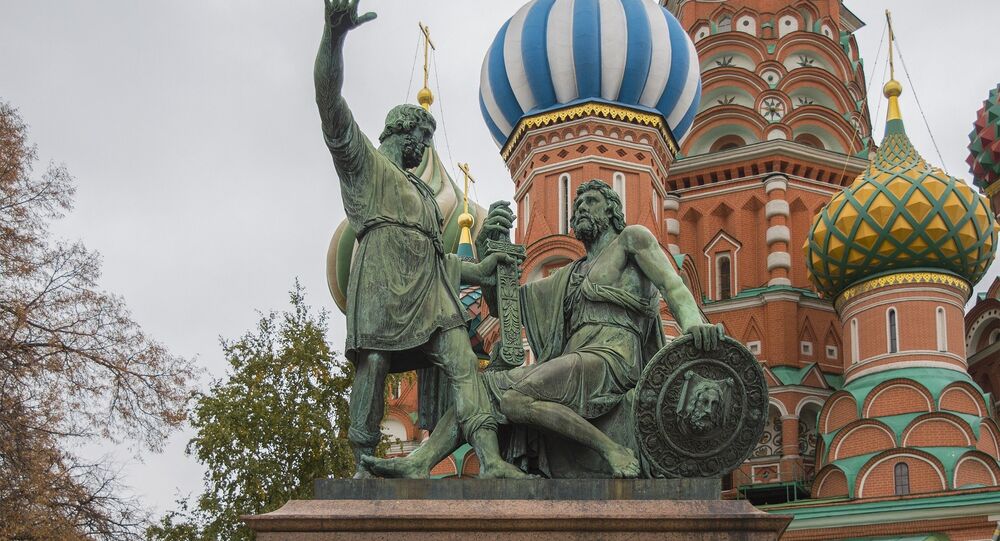 Everything You Want to Know About National Unity Day in Russia

On Saturday Russia is celebrating National Unity Day - a relatively new state holiday, albeit one with deep historical roots.

MOSCOW (Sputnik) – National Unity Day was first celebrated November 4, 2005 and established in memory of the events of 1612, when a Russian merchant by the name of Kuzma Minin and Prince Dmitry Pozharsky led a volunteer army to liberate Moscow from Polish occupation. Dmitry Pozharsky was even heralded as the 'Savior of the Motherland' for his merits.

The monument to Minin and Pozharsky on Red Square in Moscow

These events were connected to the end of the period in Russian history called the Time of Troubles.

The Time of Troubles began with the death of Ivan the Terrible, from the Rurik dynasty, in 1584 and continued until the establishment of the Romanov Dynasty in 1613. The initial discord caused by the end of the Rurik dynasty, or Rurikids, soon developed into a national existential crisis, which saw the collapse of the united Russian state and the appearance of numerous pretenders to the throne, as well as widespread disorder.

© Sputnik / Vladimir Rodionov
Russian Constitution Day in Facts and History
Power in Moscow was usurped by the Seven Boyars (nobles), who opened the Kremlin's gates to Polish troops, hoping to bring Polish Prince Wladyslaw, a Catholic, to the Russian throne. But Patriarch Hermogenes called on Russians to defend the Orthodox Church and drive the Polish invaders from Moscow.

The people responded willingly, joining volunteer units to fight the invaders. However, the first popular movement was dispersed after its leader was killed, and an anti-Polish rebellion which began in Moscow on March 19, 1611 was quelled.

In September 1611, Kuzma Minin, a meat trader and a district head in the Russian city of Nizhny Novgorod, appealed to people to join the volunteer troops.

© Sputnik
Flashback to 1917: How the Russian Revolution Changed the World
Responding to Minin’s appeal, the people of Nizhny Novgorod provided one third of their property for the maintenance of the local volunteer corps. But this was not enough, and soon another appeal was made, this time for an additional one-fifth of their property.

Kuzma Minin donated all of his money for the army, and his wife is said to have given her jewelry.

Acting in response to Minin’s plea, people appealed to Novgorod Prince Dmitry Pozharsky, then 30 years old, to lead them. But the prince only agreed to become their military leader if the people of Nizhny Novgorod would choose a trusted aide to oversee the public funds. The people chose Minin, which is why the volunteer corps had two leaders, both chosen and trusted by the people.

People from all classes of Russian society and all ethnic groups in the Russian state rallied together to liberate their homeland from the invaders.

Russian voluntary corps at the approaches to the city of Moscow

The Nizhny Novgorod voluntary corps, marching under an icon of Our Lady of Kazan, uncovered in Kazan in 1579, stormed Kitai Gorod (the external walls of Moscow) on November 4, 1612, driving the invaders from the heart of their nation. That victory provided a powerful impetus for the revival of the Russian state. The icon of Our Lady of Kazan became the protector of all Russia.

Icon of Our Lady of Kazan

The liberation of Moscow created conditions for the restoration of state power and the election of a new tsar. In November 1612, the leaders of the volunteer corps sent invitations to all Russian cities to attend a national assembly (the Zemsky Sobor). In late February 1613, the Zemsky Sobor, comprising representatives of all classes of Russian society, elected Mikhail Romanov as the new tsar, the first of the Romanov Dynasty.

The 1613 Zemsky Sobor ended the Time of Troubles and celebrated the victory of Orthodoxy and national unity.

National Unity Day is not a new holiday but, rather, an old tradition recently revived. In the end of the 17th century, the Day of the Icon of Our Lady of Kazan was established as a holiday to commemorate the liberation of Moscow. It was marked as an Orthodox and state holiday until 1917 and was celebrated on November 4 annually in memory of the 1612 liberation of Moscow.

The popularity of this holiday grows each year. According to a poll conducted by the Russian Public Opinion Research Center (VTsIOM), results of which were published on Friday, 79 percent of respondents believe that it is an important holiday.

'Nobody But Us!' Russian Paratroopers Celebrate Professional Holiday