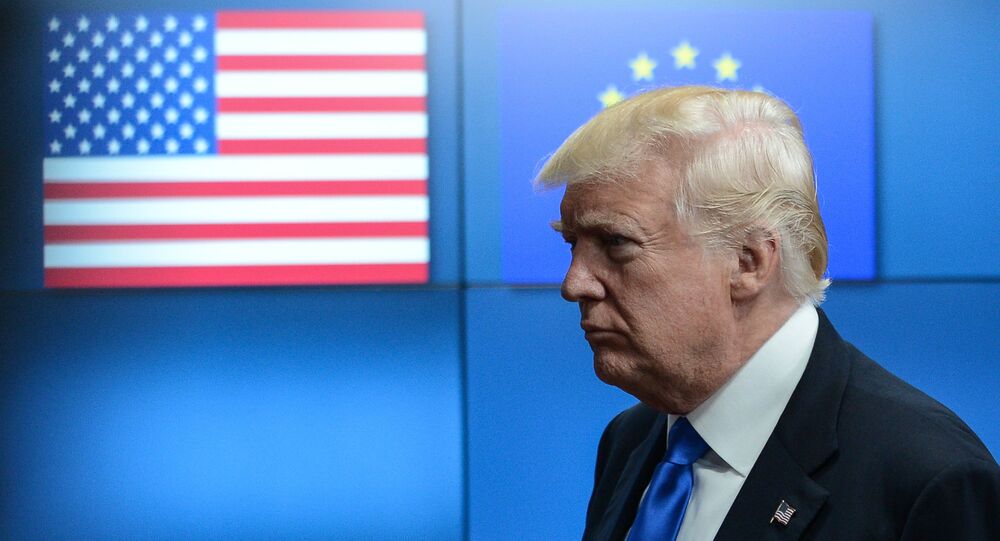 Russia will only stand to gain from US sanctions, which also threaten to sour Washington’s relations with its European partners, political analyst Dmitry Solonnikov told Sputnik.

© Sputnik / Vladimir Sergeev
New US Anti-Russia Sanctions May Threaten EU Economic Interests
"The sanctions will not only have negative consequences for Russia, but will also hurt Europe and the US itself. No longer able to obtain US and European technology, Russia will have to develop its own. At the end of the day, it will no longer need to work with US and European companies, because it will now be able to do everything itself,” Solonnikov told Radio Sputnik.

He also said that the anti-Russian sanctions were driving a wedge between the US and Europe.

“While Poland and the Baltic countries will support [the US sanctions], the ‘old’ EU nations will find themselves at the losing end. On the one hand, this is widening the rift within the EU, and on the other, it is alienating Europe financially and also in terms of energy,” Solonnikov noted.

He warned that Europeans would be getting increasingly wary of Washington.

“Many in Europe see this as a big-headed attempt by Washington to force them to buy liquefied gas from the US instead of Russia. By strong-arming someone to buy something that is more expensive, inferior in quality and less user-friendly flies in the face of European liberal norms. As a result, the European political and business elite will be getting more and more wary of Washington and this will certainly backfire on the US,” Solonnikov concluded.

Georgetown University professor Angela Stent believes that the US sanctions, designed to hurt Russia, are likely to benefit Russia and may  have unintended consequences for the United States itself.

"As currently written, the sanctions will not only continue to penalize Russia but will also penalize American and European businesses because of their restrictions on energy projects that involve Russian companies,” Stent wrote in The National Interest.

In a joint statement in June, the German and Austrian foreign ministers, Sigmar Gabriel and Christian Kern, spoke out against Washington’s plans to impose new sanction on Moscow, adding that the US was thus trying to force Europe to buy liquefied gas from the US.

Earlier this month the European Commission’s president, Jean-Claude Juncker, warned that the sanction bill “could have unintended unilateral effects that impact the EU's energy security interests.”

© AFP 2021 / Andy Buchanan
No Guts? EU Could 'Stop Buying' Shale Gas From the US as Response to Sanctions
He added that “If our concerns are not taken into account sufficiently, we stand ready to act appropriately within a matter of days.”

German Economy Minister Brigitte Zypries lashed out at the US anti-Russian sanctions program, stating it violates international law and punishes European firms. She also called on the European Union to consider countermeasures against Washington.

On Wednesday, US President Donald Trump enacted a new batch of sanctions on North Korea, Iran, and Russia.

The sanctions over Russia's alleged meddling in the 2016 presidential election target the country's defense and economic sectors and restrict dealings with Russian banks and energy companies.

The law also limits the US president's ability to ease any sanctions on Russia by requiring Congress's approval to lift any restrictions.