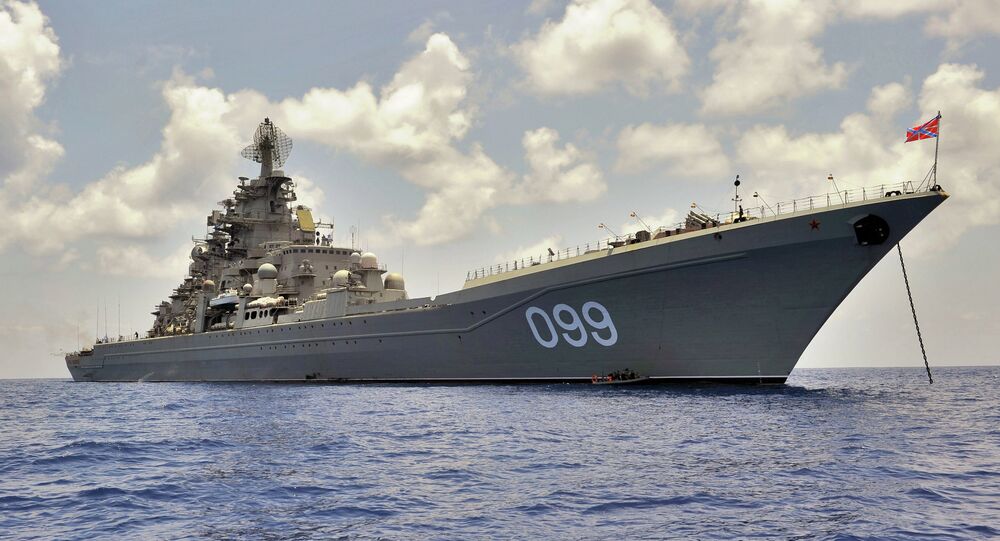 To get to the Baltic Sea for a Navy Day parade in St. Petersburg, Russia’s heavy nuclear battlecruiser Pyotr Veliky and the nuclear-powered submarine Dmitriy Donskoi will have to sail through international waters. This simple fact gave Germany’s NRD TV and Bild magazine enough reason to call this a PR -stunt and a “demonstration of force.”

“In addition to three modern Chinese warships, the Dmitriy Donskoi and the Pyotr Veliky will also be taking part in a Russian-Chinese naval drill in the Baltic,” NRD reported.

© Sputnik / Vitaliy Ankov
Russian-Chinese Naval Exercise Cooperation 'Highly Effective'
It looks like the folks at NRD and Bild got it all wrong. Taking part in the Joint Sea-2017 exercise in the Baltic Sea, that entered its active stage on Tuesday, are two Chinese warships, the Hefei and the Yungcheng, and as many Russian corvettes, the Steregushchiy and the Boikiy.

As for the Dmitriy Donskoi and the Pyotr Veliky battlecruiser, they are steaming to take part in a July 30 Navy Day parade in St. Petersburg, as was correctly reported by DPA and all Russian media outlets.

Even more surprising, NRD referred to some imaginary statement by the Russian Defense Ministry, which it never made.

“Except from the territorial waters of the countries that open on it, the Baltic Sea also happens to be international waters anyone is free to sail in, including the Russian and Chinese navies,” NRD quoted a German naval inspector as saying.

The only truth in the Bild story is that the Dmitriy Donskoi is going to St. Petersburg. But even a quick look at the headline shows how far the authors have gone to bend the truth and offer a hugely exaggerated picture of what is really going on.

“A Demonstration of Force in the Baltic Sea. What is Putin’s Sub Doing Near Our Shores? NATO Reports a Growing Number of Incidents in the Air,” the Bild’s headline reads.

“This is just political muscle flexing designed for domestic consumption. Genuine patrols are done in secret,” the newspaper quotes an “expert” who seems to forget that the 172-meters-long and 28-meters-tall Dmitriy Donskoi is simply too big to cover the whole distance submerged without putting her crew at risk.

© AP Photo / Steven Governo
Playing Catch-Up: US Navy Lags Behind Russia, China by a Decade
Having nothing more to dish out, Bild writes at length about some incidents in the air, as if they have anything to do with the Dmitriy Donskoi.

There is one thing in the newspaper’s story that really holds some water though.

Every military exercise is a demonstration of force, and this is exactly what NATO is doing near the Russian borders. Some mainstream media prefers to keep mum about this, and with pretty good reason, too. Why tell the truth?