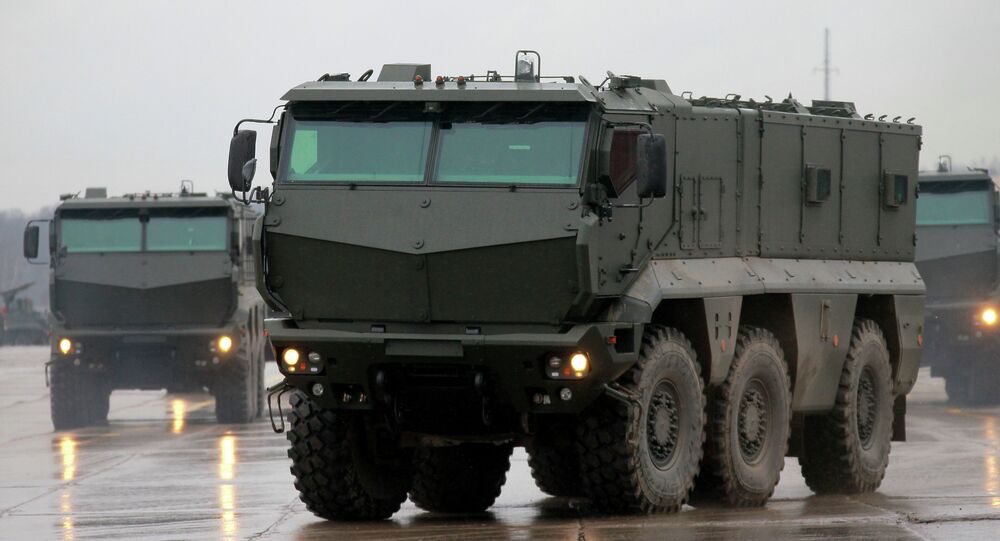 During a series of field trials, the Taifun’s armor was put to the hard test successfully withstanding a barrage of submachine and machinegun fire, including with steel-core bullets, which often cut through conventional flak jackets.

Moreover, its wheels, fitted with plastic covers underlying the tires, proved equally impenetrable allowing the vehicle to move on even with flat tires across rugged terrain.

The Taifun sports a welded steel armor hull with the front arc providing protection against 12.7-mm armor-piercing rounds. All-round protection is against 7.62-mm rounds. The interior is lined with Kevlar anti-spall liner.

The vehicles have a double hull for improved protection against landmines and are fitted with automatic fire suppression and NBC protection systems.

The Taifun armored vehicle is equally protected against open fire. During one test run, a Typhoon was doused with napalm, but the airtight hull prevented the flames from getting inside.

The vehicle can move across country with a speed of up to 100 km/h. Its endurance distance is up to 1,500 km.

The armored capsule of the vehicle is capable of absorbing 30mm shell hits, may contain 16 servicemen and several tons of cargos.

A direct hit by an artillery shell or a landmine have always been a major problem for any types of armored vehicles.

Here too the Taifun escaped largely unscathed with a direct hit by a blast-fragmentation shell causing a tiny crack on the porthole, cracking a back view mirror and doing other, equally insignificant, damage.

During one test a Taifun withstood some 15 direct hits, including by a self-made bulk explosive device. The amount of explosive was enough to blow a Gazelle mini-truck to bits, but the Taifun remained roadworthy and its engine kept running even if the hood was blown off.

To protect the crew against landmines, the seats are welded to the walls of the hull, which minimizes the effect of the shock wave.

© Sputnik / Said Tsarnaev
Russian Troops Use BTR-82A Armored Vehicles for First Time During Military Drills in Tajikistan
Specialists at the Defense Ministry’s 3rd Scientific Research Institute insist that the Taifun’s foreign counterparts are unable to handle all this.

Even with its wheels torn off by a powerful blast, the vehicle remained roadworthy with the doors opening easily, the engine starting and the crew unharmed.

Overall, the field trials of the Taifun-Airborne have proved it to be an extremely rugged and safe vehicle, which is exactly what Russian airborne troops need when they engage the enemy on the ground.