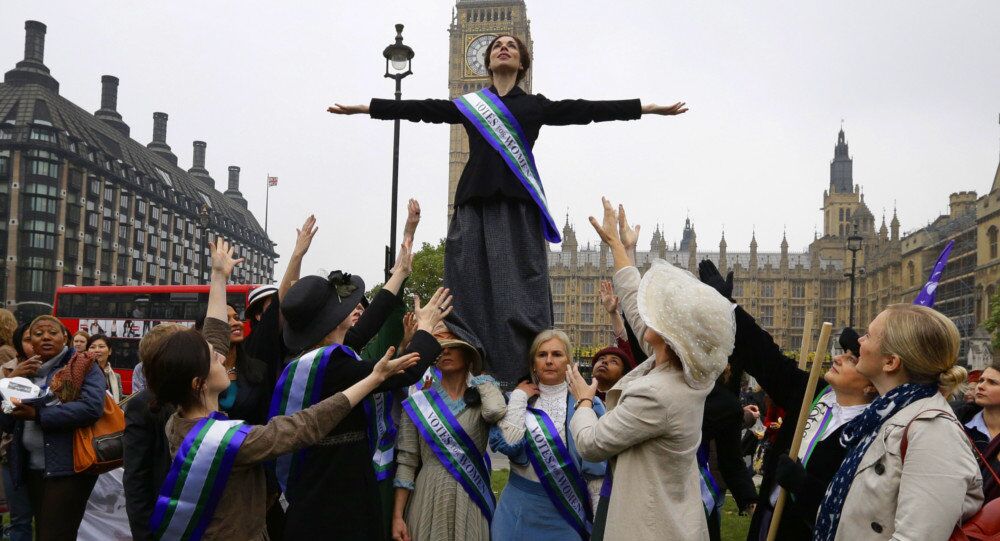 High Hopes: The 1917 Russian Revolution and Emancipation of Women

The Great Russian Revolution of 1917 and the events that proceeded, and followed it, saw the creation of the world’s first socialist state, which was committed to promoting the equality of men and women. Many early Russian feminists and workingwomen actively participated in the Revolution, and many more were affected by the events of that period.

The turn of the 20th century saw the emergence of major feminist movements in Britain and in Russia. In Britain women demanded voting rights, while many of the demands made by women in Russia remain very much relevant today.

“They argued that if relieved of their household chores they would be able to take part in public life. It was a very revolutionary idea back in those days,” Brazilian historian Ana Nemi said in an interview with Sputnik Brazil.

A Doctor of History at the Universities of San Paulo and Lisbon, Ana Nemi, underscored the role played by Alexandra Kollontai, a Russian revolutionary, feminist, diplomat and the first woman ever to hold the post of a Cabinet minister.

© Sputnik /
Flashback to 1917: How the Russian Revolution Changed the World
Kollontai, just like other Bolshevik leaders, argued that under capitalism only women who could afford hiring housekeepers enjoyed the luxury of being relieved from their everyday chores.

“In her capacity of a People’s Commissar of Social Welfare, Alexandra Kollontai launched a nationwide campaign to open restaurants, public laundries and also schools and day care centers in a bid to relieve women of their routine homework and give them a chance to participate in public life,” Dr. Nami continued.

“Simultaneously, Soviet women were now able to divorce their husbands and have an abortion – things that put Soviet Russia at the forefront of the feminist movement,” she added.

Meanwhile, all these novelties were facing strong opposition from the very revolutionary government on whose behalf they were being implemented.

“Leftist-minded men, especially those in the trade unions, feared that socially active women would take away their jobs, and this posed a serious problem,” Ana Nami observed.

Under Josef Stalin, the feminist movement and women’s rights in general were put on the back burner though.

Pushed out of the male-dominated Soviet power elite that was increasingly uncomfortable with her insistent advocacy of feminist issues, Alexandra Kollontai was appointed to the Foreign Ministry.

“It was a sort of a privileged exile for her. Still, she did not leave Russia emigrate like did many of her friends unhappy about the direction the Revolution had taken during Stalin’s rule. In one of her books she wrote that the emancipation of women is an open-ended mission because it was never accomplished in the very country that was supposed to liberate all people,” Ana Nami emphasized.

She said that she had learned from the fact that ”it is impossible to separate economic emancipation from a moral one,” because the 19th and 20th centuries failed to accommodate the demands women made in the 18th century, and many of them still live in abject poverty having to work twice as much as men.

“The discussion of the events that took place in 1917 is of paramount importance today as we rethink the emancipation of women,” Ana Nami said in conclusion.

© Flickr / Colin McMillen
The Revolution of 1917: Why Japan Honors Its Russian Immigrants
The main events of both revolutions took place in Petrograd, now known as St. Petersburg.

The Revolution of 1917: Why Japan Honors Its Russian Immigrants