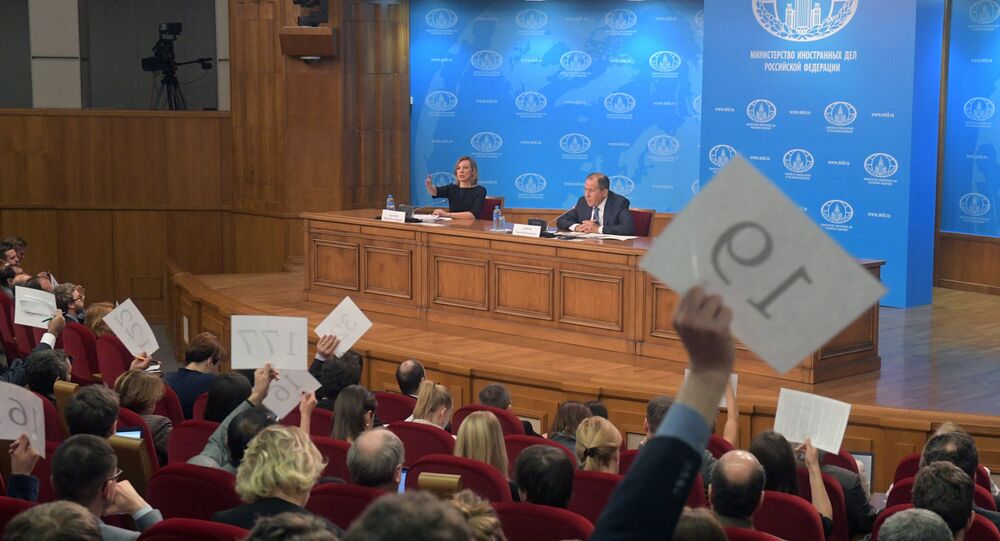 What is Russian Cyberthreat ‘Tufta’ Lavrov Was Referring To?

During a recent news conference, Sergey Lavrov, the Foreign Minister of Russia, commenting on the Russian cyber threat, calling it “vranie” and “tufta.” Sputnik now comments on these Russian words for foreign leaders around the world.

© Photo : PIxabay
White House Calls Denying Hacking by Russia 'Insult' to US Intelligence
The world, for American leaders, has become incredibly simple recently: of all countries in the world, Russia is the bogeyman again.

China, which moved the United States aside as the world's number one economy back in 2014 and is still being ruled by the Communist Party and who has the largest army in the world, with 2,300,000 active personnel; neither North Korea, who openly threatens to nuke the United States; not even Muslim nations from the Middle East have achieved the status of America's scariest enemy.

Russia has a military budget of some $70 billion annually and an army of 771,000 active personnel. It can, according to US intelligence operatives, easily decide who will become the next President of the United States, hack any government service, including power plants and voting machines, and has total direct control over minds of almost half America's citizens by broadcasting dark propaganda waves. That means some 150 million people are American zombies for Russia. But a 2016 Ipsos study indicated that only about 8 million people in the United States watch Russia Today TV channel each week, although the number is observed to be growing rapidly.

Something about those two figures, 8 million and 150 million, does not add up, and that discrepancy is tufta.

When asked by a German DPA reporter about how Russia would prove its innocence in cyberattack accusations, Lavrov replied:

"To be honest, I'm not going to prove anything to you. I thought that in Germany, as well as many other countries, exists the presumption of innocence. So, it's you who should prove things."

"We've seen some attempts to prove [these allegations], that both the British and their colleagues in the US (who tried to make things worse for the oncoming [US] administration) try to discard now… Some rogue phony from MI6… I can keep listing."

Lavrov pointed out that Russia proposed new international legislation to criminalize hacking, within the OSCE framework, but this proposal was denied.

"The people who refuse to work on universal rules of order in information space, on common efforts against cyber crimes, these very people claim we took the whole world under our control," he added.

Lavrov said that he has seen a BBC report about a special counterintelligence group created by the CIA, which includes FBI, NSA, Office of Director of National Intelligence, US Ministry of Justice and US Ministry of Finance representatives, who have been investigating President-elect Donald Trump's financial ties with Russia.

"If all this team of respected institutions managed to dig only what they made public, they should be fired for spending money in vain," Lavrov pointed out.

Commenting on a journalist's question about whether the largely debunked "compromising material" on Trump and Russian hacking allegations are links of same chain, Lavrov said:

© AFP 2019 / AMER ALMOHIBANY
Heroes or Zeroes? Questions Raised About Upright Image of 'White Helmets'
"These are convulsions based on wider context that wish only to confront Donald Trump and Russia. These are convulsions of those who understand that their time is out; who understand that promoting values of permissiveness both in everyday life and foreign affairs becomes impossible, because there are serious people who want to take care of problems of their nations and their people. The time of foreign affairs demagogues is out."

"All kinds of fake news is being created," he said, pointing out that tufta is commonly initiated by US officials.

"This tufta is presented as truth by a news service financed by the State Department of the United States of America."

"Probably, someone wanted to forget what [Edward] Snowden said three years ago, how the US National Security Agency hacked into Al Jazeera, the Aeroflot tickets booking system, the domestic conference communication at the UN and wiretapped [French President Francois] Hollande, [German Chancellor Angela] Merkel and the EU leadership," he said.

"Remind your readers that these episodes that became known and are confirmed by facts were unnoticed by those who now cry based on tufta and lies that Russia poses a cyber threat," Lavrov stressed.

Maybe shares of tufta should be traded on US stock exchanges.

Russia, US Had No Contacts on Reported High-Level Summit in Iceland - Lavrov