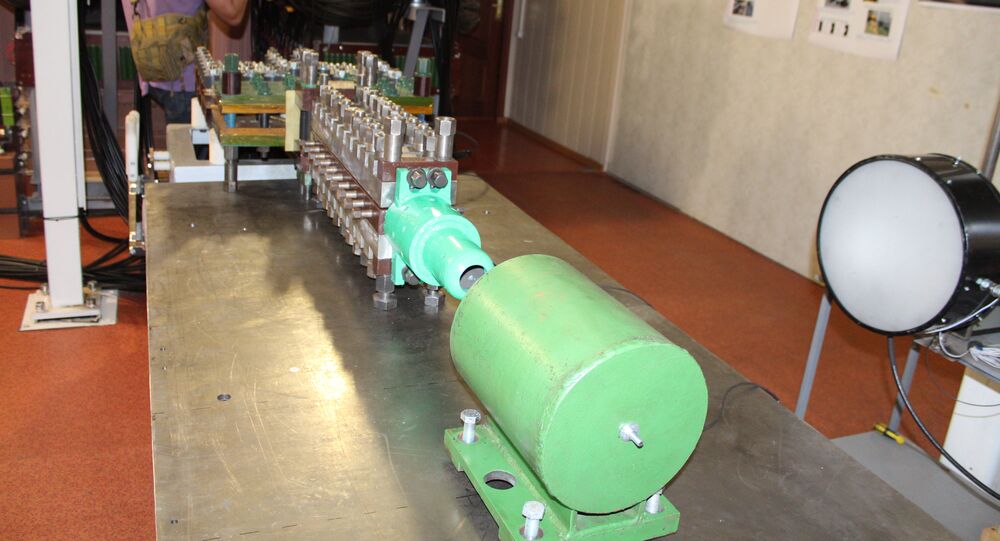 A team of Russian scientists has successfully tested the country's first railgun, which relies on electromagnetic forces rather than explosives or propellant.

According to experts at the Institute of High Temperatures’ branch in Shatura, just outside Moscow, the railgun can fire shells at an incredibly fast speed of 3 kilometers per second, which is well enough to cut through any type of armor existing today.

During the latest test, a 15 gram plastic cylinder fired by the railgun went through an aluminum plate several centimeters thick.

© Photo : scientificrussia.ru
Faster Speeding Bullets: Russia Test-Fires Its Own Railgun
Railguns are powered by electromagnetic conductors instead of gunpowder or explosives, allowing them to inflict major damage.

While many countries are already staking on the railgun as a future weapon, Russia is also considering other, more peaceful applications, such as ferrying cargoes to the International Space Station.

During a recent test in Shatura, the railgun fired a projectile at the speed of 3 kilometers per second, which is about half of what  booster rockets need to overcome gravity and reach the Earth’s orbit.

“The railgun is a big boost to our study of high energy physics as we are now ready to build apparatuses working at speeds exceeding 4.5 kilometers a second,” the Shatura Institute’s director Alexei Shurpov told Zvezda TV.

Since the latter half of the 20th century, many developed countries have been working on a new type of a multi-mission electromagnetic railgun weapon capable of detecting, tracking and engaging ballistic missiles and air and watercraft threats.

The US Navy is pushing ahead with the development of its own super-powerful electromagnetic railgun to fire rounds at speeds up to Mach 7.5, which at 9,100 kilometers per hour, is more than seven times the speed of sound, and covers a distance of about 400 kilometers.

© AP Photo / U.S. Navy, John F. Williams
US Navy Receiving First Pulse Power Units for Railgun Program - Raytheon
The prototype of the RailGun was unveiled in 2015 and in 2016 weapon was presented complete with its ordnance.

The problem with the US design, however, is that it requires a tremendous amount of power to operate – over 25 megawatts per one shot. Another problem here is that the longer the distance to the target the weaker the impact of this shot as air resistance keeps slowing the projectile down as it travels to its target.

Even though the railgun tests conducted by the Russian Institute of High Temperatures have not produced any military breakthroughs yet, they have already been recognized as some of this country’s major scientific achievements of the past year.