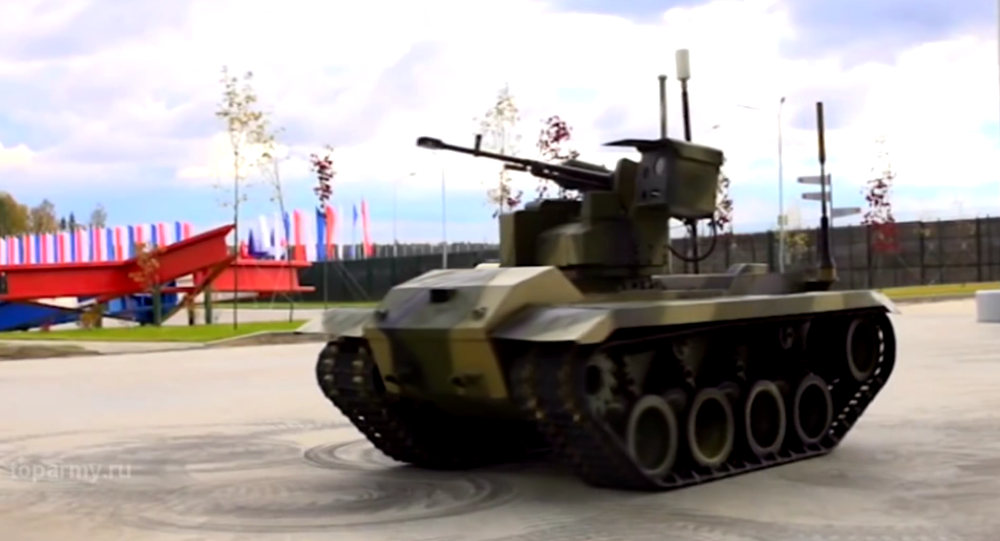 Russian army scouts and Special Ops troops will soon add to their arsenal a unique kamikaze robot capable of destroying enemy tanks and fortifications by getting close to them and blowing itself up, Izvestia wrote.

Highly maneuverable and silent, this miniature robotic tank, built at the Degtyarev Plant in Kovrov, will sneak up on its target totally unnoticed and take the enemy by surprise.

“The Nerekhta system has been put on the list of future fighting robots currently being mulled for use by the Russian Armed Forces, a Defense Ministry official told the newspaper. “If the combat platform passes the tests, it will enter service with our army scouts and Special Ops troops.”

The Nerekhta is built around a light armored rubber-track platform and looks like a miniature tank where the turret is replaced with an explosives-packed container.

Weighing 300 kilograms and just over one meter long, the Nerekhta can haul hundreds of kilograms of high explosives at 11 km/h in a silent mode.

Before it goes into combat a map of the the battlefield with the coordinates of the designated targets is downloaded to its onboard computer. All its operators need to do is just push a button clicking the number of the downloaded targets and leave the rest to this powerful tank.

Receiving the radio command, the Nerekhta will plot its course to the target, approach it and blow it up.

This is exactly what the Nerekhta did when it was unveiled to the public during the Army-2016 expo outside Moscow.

“A robotic arm will eventually be added on to make the Nerekhta reusable. It will unload the explosive charge and return to base. We also want to make it move faster,” the Degtyarev Plant’s deputy chief designer Dmitry Fufayev told Izvestia.

The idea of self-destroying robots is not new. One such unit was used by the Germans during WWII. It was a remotely operated miniature tank hauling 100 kilograms and used to destroy tanks, fortifications and enemy manpower.

Nerekhta-like kamikaze robots are also being developed in Israel (Rambot) and South Korea (iRobit First Look). These miniature machines are mainly designed for indoor use against terrorists and criminals.

“Foreign-made kamikaze robots are nothing more than radio-operated grenades that are placed inside a building to take out the bad guys hiding inside. By contrast, the Nerekhta can destroy tanks and entire buildings, is pretty small and highly maneuverable,” military historian Alexei Khlopotov said.

© Sputnik / Vladimir Astapkovich
Russia's Nerekhta-2 Combat Robot to Be Presented in 2016
Russia is working on robotizing its armed forces to develop combat robots able to act independently on the battlefield.

The past few years have seen the advent of a number of track-type battle robotic systems armed with machineguns and anti-tank rocket launchers.
Some of them, such as Platforma-M and Uran, are now being actively tested in the Russian Army.