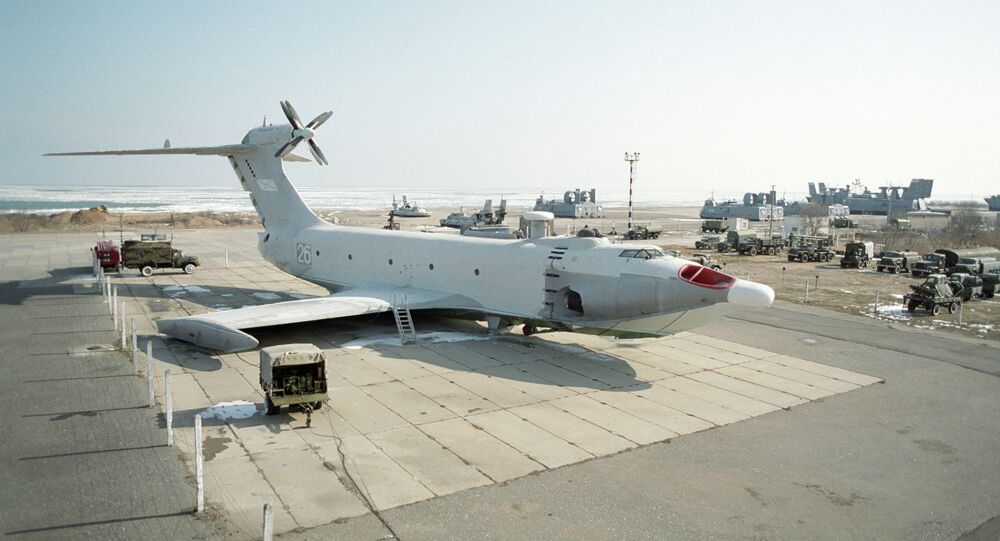 Its construction at the Volga Shipyards was 90 percent done when military funding ended and it was never completed.

Youtube / МЧС России
Be-200 Amphibious Plane Shines During Firefighting Drills in Crimea
This technological marvel has since been gathering dust in Nizhny Novgorod.

“We still have a life-size model here which we are going to use as a test laboratory for future aircraft,” Sergei Dementyev said on the sidelines of a hydro-aviation expo now underway in Gelendzhik, Crimea.

He added that the ground effect vehicle is primarily viewed by the Alexeyev Central Design Bureau as a civilian project, but if necessary, it could be converted for military use as well.

“This is a multirole craft, which can be used for high-speed transportation of cargoes and passengers, in search-and-rescue missions, and it can also carry arms,” Dementyev noted, mentioning the great deal of domestic and foreign interest in this type of high-speed water-skimming aircraft.

The ekranoplan is a high-speed transporter, a combination of a heavy-lift plane and a light motorboat.

Designed by Rostislav Alexeyev and used by the Soviet and Russian navies from 1987 until the late 1990s, the ekranoplan flies using the lift generated by the ground effect of its large wings when moving less than four meters above the surface of the water.