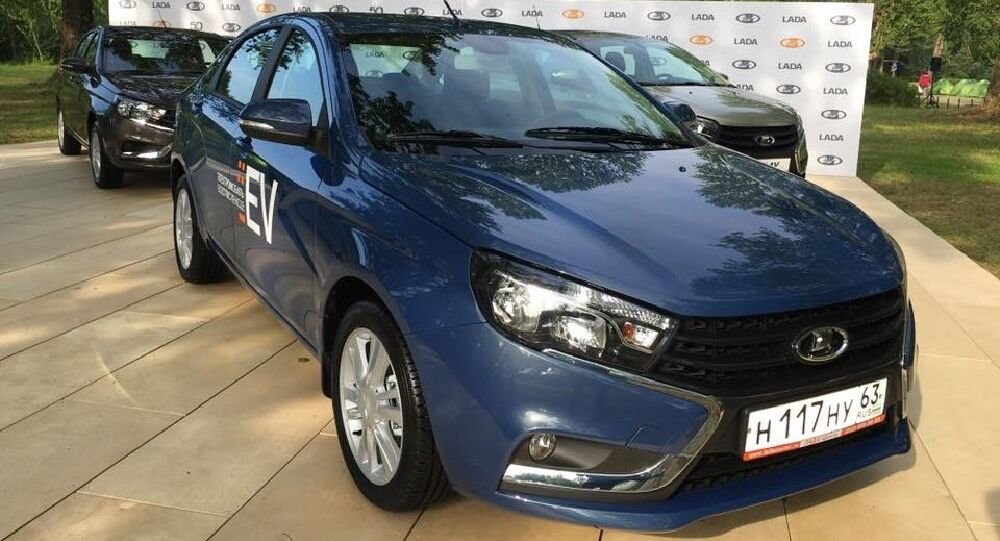 Automotive giant Avtovaz has given Russian automotive enthusiasts a sneak peak at its latest project – an electric car based on the new Lada Vesta sedan. The prototype of the new car, dubbed the Vesta EV, is being shown off at the U235 Open Industrial Festival of Art Song & Poetry outside St. Petersburg.

The Vesta EV, built on the same platform as the company's new flagship sedan, the Lada Vesta, is equipped with a 60kW electric motor, which offers the equivalent of about 82 hp and has a battery capacity of 25 kilowatt-hours. The car's motor will allow the 1.4 metric ton sedan to go from 0-100 km/h in 15.5 seconds, and reach a top speed of 140 km/h.

​The prototype's batteries (placed under the hood and under the rear passenger seats) will be able to get a full charge after about nine hours of charge time from an ordinary electrical outlet. The car's batteries provide it with 170 km-worth of juice in-city, and 150 km on combined highway-city driving.

© RIA Novosti . Vladimir Astapkovich
‘Made in Russia’ Mitsubishis Are ‘Better Than Japanese’
Electric cars are not a novelty for Avtovaz. The company released its first battery-powered vehicle, the Lada Ellada subcompact, in 2012. That car, based on the first-generation Lada Kalina, has a 0-100 km/h time of 13 seconds. The batteries' eight hour charge gives the car 150 km-worth of juice, and the vehicle features a 30 minute 'express charge' setting. The Ellada has been undergoing extensive testing in Russia's southern regions. A full charge costs owners about 50 rubles (75 cents US) worth of electricity.

Commenting on Avtovaz's growing lineup of prospective electronic vehicles, Sergei Udalov, executive director of the automotive market analytical agency Autostat, told Russian media that if the company wants to build up a real presence in foreign markets, it will have to develop and sell electric cars. "Moreover, there are countries in which the manufacturers of electric vehicles are provided with significant preferences." Effectively, Udalov noted, "the automotive industry is slowly but surely heading in this direction, and the main thing is to keep pace."

© Flickr / mangopulp2008
Oldies but Goodies: Finns Auction Off Vintage Soviet Cars Dumped by Migrants
Along with the Vesta EV, Avtovaz has also developed another alternative fuel-powered vehicle based on the Vesta platform, dubbed the Vesta CNG, which is set to roll out later this year. A dual-fuel vehicle, this version of the car will be able to run on both gasoline and compressed natural gas, making it much more economical. Equipped with a CNG tank capable of taking it up to 1,000 km, the car can automatically switch to gasoline once the compressed methane runs out. The system also enables the driver to switch back and forth between the fuel types manually.

The long-expected Lada Vesta began winning over the Russian automotive market last year. According to Rossiyskaya Gazeta, the ordinary, gasoline-powered Vesta is one of the top five most-sold new cars in Russia; it's currently in fourth place.

‘Made in Russia’ Mitsubishis Are ‘Better Than Japanese’

Birth of LADA Priora, a Star Among Cars in Russia