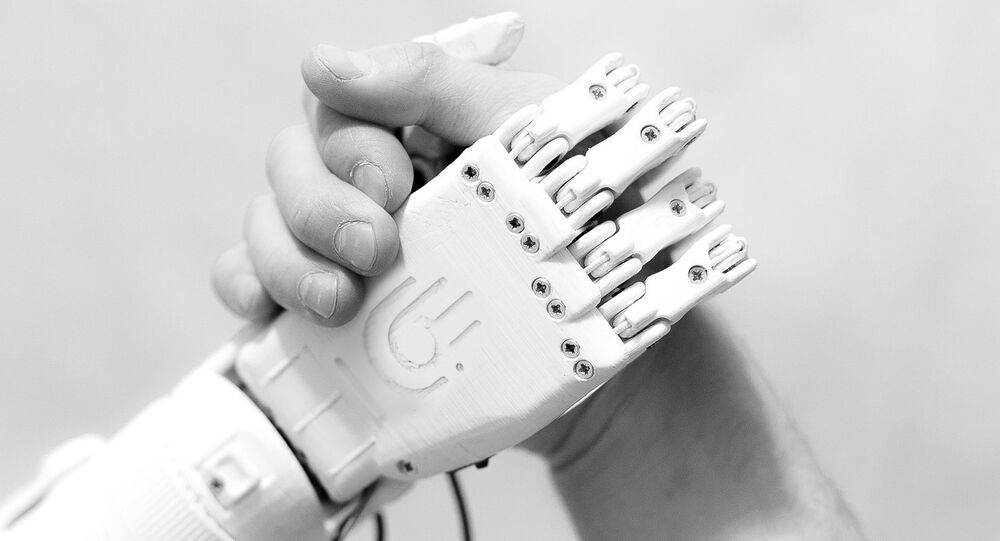 A young Russian man told Sputnik that he has managed to create a bionic hand unlike any other in the world.

© Flickr / Dominik Golenia
Special Offer for Special Needs: Disabled People in India to Get Unique ID Cards
Three years ago, Maxim Lyashko, a 28-year-old engineer from the Russian Siberian city of Norilsk, lost his right hand while working in a mine.

Instead of yielding to the tragedy, Maxim decided to develop a bionic prosthetic hand all by himself, something that he said in an interview with Sputnik proved to be a hard nut to crack.

"I still face a lot of difficulties, and it take me plenty of time to create the MaxBionic prosthesis with the help of a 3D printer," he told Sputnik.

According to Lyashko, his prosthesis will cost about one thousand dollars, while the price tag of foreign analogues ranges from 25,000 dollars to 250,000 dollars.

© Photo : MaxBionic
Lyashko (R) and a patient with the MaxBionic prosthesis

"After the injury, I spent 18 months in hospital, where I had a lot of operations. I started to work on the prosthesis in late 2014 and the first prototype was made in a few months," he said.

When asked about interesting facts related to the matter, he said that he managed to develop and assemble the prosthesis on his own, without receiving a penny from outside.

He added that it's very easy to prepare the prosthesis for work with the help of software installed on a PC, saying that  there is no such software among foreign analogues.

The prosthesis is made of domestically made parts which Lyashko admitted are yet to be improved.

"We are still developing sensors which help operate the prosthesis. A person feels that he has a phantom hand, and as he mentally tries to squeeze the hand muscles are activated prompting sensors to record the signal and control the prosthesis," he said.

Asked about the advantage of his prosthesis as compared to foreign analogues, Lyashko specifically pointed to the fact that he is an amputee.

"I'm a disabled person and a prosthesis user, so I know the problem from the inside and understand what a healthy person cannot comprehend. This is why my vision of a smart prosthesis is out of line with international standards," he said.

A campaign to raise funds for the MaxBionic project was launched on the Russian crowdfunding platform Boomstarter on May 30, 2016. The goal is to collect 1.5 million rubles for the development of an open-source version of the prosthesis, which can be printed at a home 3D device. 500,000 rubles have already been collected.

With the deadline due to expire in 20 days, Boomstarter PR-manager Anastasia Marishchuk remained upbeat about the crowdfunding, urging the authors of the project to continue to work.

In an interview with Sputnik, she said that this "promising project gives disabled people a chance to enjoy a full-fledged life and partially restore their lost limb function."

© Photo : MaxBionic
Lyashko (L) and a patient with the MaxBionic prosthesis

"This is fully a Russian design, which has no foreign analogues, and also it ten times cheaper. The sum which has already been collected by Maxim shows that his MaxBionic is really an urgent project," she said.

She added that the project has everything that attracts people toward crowdfunding, including cutting-edge technology and a social component.

"It is necessary to reconsider the concept of promotion so that the project can be supported by not only those seeking to support Russian manufacturers, but also the people who are currently in a difficult life situation," she said, referring to amputees.