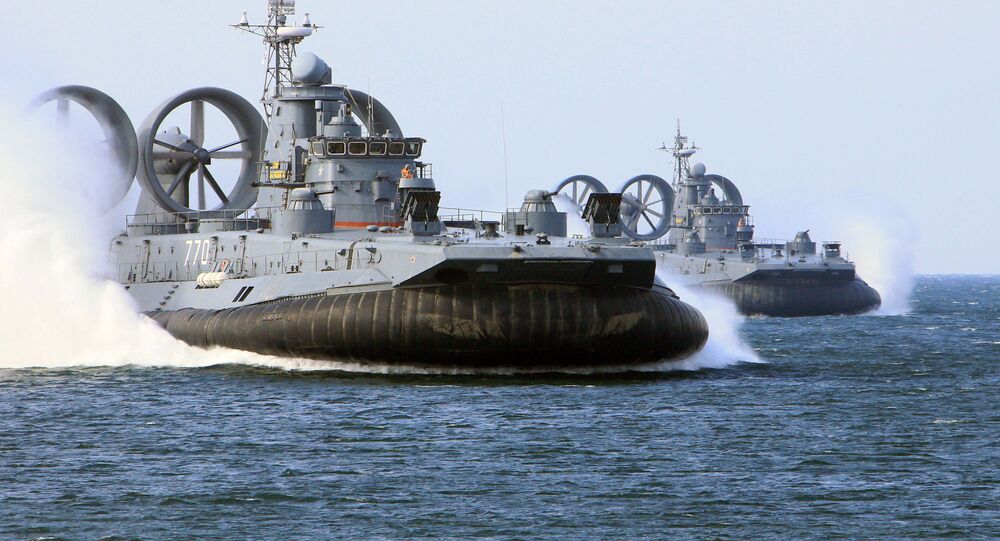 © Sputnik / Alexei Danichev
Russia Moves Closer to Building New Aircraft Carrier
A video has been released by the Russian news network Zvezda to show the Russian amphibious assault ship Mordovia, the largest hovercraft in the world, destroying targets during drills in the Baltic Sea.

The Russian Navy Zubr-class amphibious vehicle is designed to deliver amphibious assault units, including marines and tanks, to unequipped shores, as well as transport and plant naval mines.

The vehicle can carry three main battle tanks, or ten armored vehicles plus 140 troops on board.  The 57-meter-long Mordovia  has a standard full load displacement of 555 tons and moves at a speed of about 110 kilometers per hour.

© Sputnik / Alexei Danichev
Sea Ghost: New Russian Submarine is Stealthier Than a 'Black Hole'
At full displacement, the ship is capable of negotiating up to 5-degree gradients on non-equipped shores and 1.6m-high vertical walls.The Mordovia remains seaworthy in moderate conditions up to Sea State 4, during which wind waves range between 1.25 meters and 2.5 meters.

Aside from firing on sea and air targets, the Baltic Sea drills saw the Mordovia sealifting BTR-82 armored personnel carriers and marines to a new beachhead. The vehicle is part of Russia's Baltic Fleet.