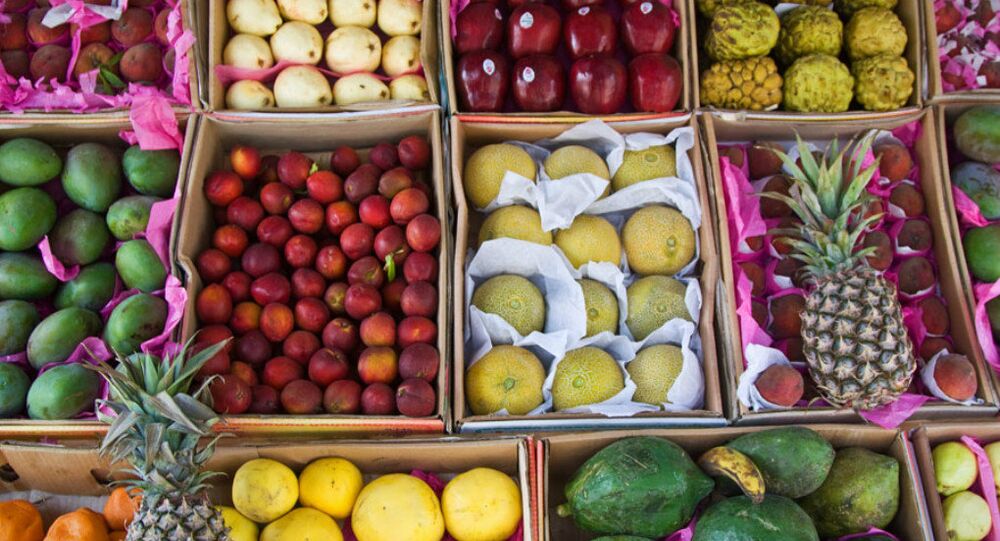 While the Russian embargo on the food and other imports from Turkey is in place, Iranian producers are ready to replace Turkish products and export them to Russia.

Director of the Organization of Industry, Trade and Mines in the Iranian province of Mazandaran, Mohammad Mohammadpour, said that Iran can replace Turkey and become Russia's key partner in the food and agricultural sector.

"Our climate enables farming all year around. That is confirmed by the figures: today Iran is among the ten largest producers of fruits and vegetables in the world," the economist said in an exclusive interview with Sputnik Persian.

According to him, Iran is holding leading positions in the production of pistachios, dates and saffron.

"We are proud of the fact that our potential has not been exhausted," Mohammadpour said.

© Fotolia / Aleksandar Mijatovic
Iranian Fruits to Replace Turkish Imports in Russian Market?
In his opinion, Iran and Russia are not only friends, but real allies: the countries created a coalition on the basis of their strategic interests.

According to the economist, Iranian economic and business circles maintain constant contact with Russian top officials and look forward to a broad economic cooperation between the two countries.

The current political situation, namely Russia's deteriorating relations with Turkey, plays a significant role in the rapprochement between the two countries. However, Mohammadpour argued, it is not a decisive factor for Iran's willingness to expand cooperation with Russia.

"Those who say Iran is solely using the current political environment and seeking to conquer the Russian market in this way, are wrong. The history of relations between our peoples goes back to the distant past. We are geographically separated, but economically united by the Caspian Sea," the economist argued.

Earlier, in an interview with Sputnik Persian, Hedayat Asghari, the executive director of the Iranian Trade Association, outlined the prospects of replacing Turkish fruit, meat and fish with Iranian produce in the Russian market.
Hedayat Asghari said that an Iranian delegation had already clinched a preliminary agreement with a Moscow-based wholesale company on the supply of Iranian fruits and vegetables to the Russian capital.