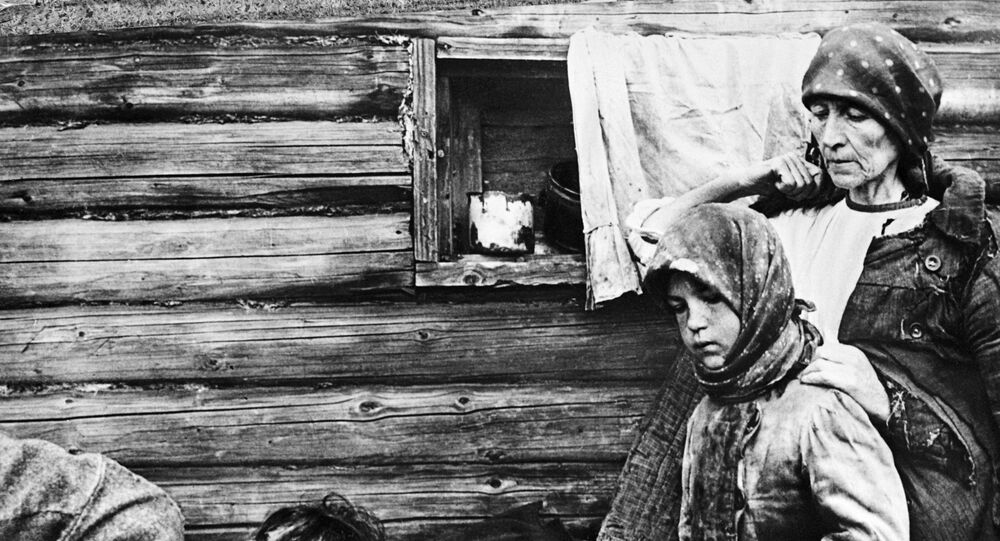 In an exclusive interview with Sputnik, Russian economist, author and politician Nikolai Starikov shared his views on the controversy surrounding the famine of 1932-33 in the USSR and shed some light on the Western anti-Soviet sanctions policy in the early 1930s.

The disastrous famine of 1932-33 in the USSR, used by the West as a bludgeon against the Soviet Union during the Cold War era, should not be taken out of the surrounding historical context.

The famine, later heavily politicized and groundlessly dubbed "Holodomor," is only a part of the story of the young Soviet state and the hardships it faced after the First World War.

Hit severely by World War I and exhausted by civil war and foreign intervention, the Soviet state had to rebuild its industry and modernize its agricultural sector to survive and improve the living conditions of the Soviet people.

Western governments were initially hostile to the Soviet leadership and refused to recognize the new state. After the Entente intervention ingloriously failed, the Western powers – most notably Britain, France and the United States – tried to take over the USSR through economic pressure.

"In that period of time the Soviet leadership was focused on creating industries the Soviet state lacked. In order to accomplish the task, the Kremlin implemented so-called "piatiletki" ("five-year plans"). In fact the solution of the problem was divided into two phases: firstly, [the Soviet leadership planned] to construct new industrial facilities, secondly, to sharply increase the crop production through the use of farm machinery and then pay for new foreign equipment by money earned through agricultural exports," Nikolai Starikov, Russian economist, author and politician, told Sputnik.

"And here the West had made an attempt to catch the Soviet Union out," the author remarked.

"In 1925 a so-called "golden blockade" was imposed on the USSR: the Western powers refused to accept gold as payment for industrial equipment they delivered to Russia. All of a sudden they demanded that the Soviet government pay for the equipment in timber, oil and grain," Starikov emphasized.

Western governments explained that their decision was triggered by the Bolsheviks' refusal to pay the Russian Empire's debts.

But that is not all: in the early 1930s major Western powers – the United States, France and Britain – placed an embargo on trade with the Soviet Union and refused to sell anything to the USSR for everything but GRAIN.

"Imagine, the Soviet Union had been "caught" amid an all-out effort to rebuild and modernize its industrial basis," Starikov elaborated, "however, since then the equipment (the USSR had a crying need for) could be bought for grain only."

But what about Russia's agricultural sector at that time?

It is worth mentioning that since the end of 19th century the Russian Empire had been suffering from repeated famines. Furthermore, during the First World War the area of Russia's cultivated lands had diminished significantly.

In the 1920s, Russia, including the territory of modern Ukraine, was struck by a series of famines, occurring every two to four years. The proponents of the so-called "Holodomor" concept (an idea that the Soviet government deliberately organized the devastating famine of 1932-33) usually ignore the fact that the Soviet Union had gone through severe famines in 1920-21, 1924, 1927 and 1928.

"The year of the two Russian revolutions, 1917, saw a serious crop failure leading to urban famine in 1917-18. In the 1920s the USSR had a series of famines: in 1920-23 in the Volga and Ukraine plus one in western Siberia in 1923; in the Volga and Ukraine again in 1924-25, and a serious and little-studied famine in Ukraine in 1928," Professor Grover Carr Furr of Montclair State University wrote in his book "Blood Lies: The Evidence that Every Accusation Against Joseph Stalin and the Soviet Union in Timothy Snyder's Bloodlands Is False," quoting research works by Prof. Mark B. Tauger, a renowned expert on famine.

© Sputnik / Shagin
Holodomor Hoax: The Anatomy of a Lie Invented by West's Propaganda Machine
The famines, caused by then Russia's agricultural backwardness, natural disasters and the wars' long-term effects, were a part of a broader food supply problem in post-WWI Russia.

Then, the question arises: were Western powers aware of the USSR's desperate need for grain when they imposed sanctions on the Soviet Union demanding grain as the only means of payment?

"In fact the West's demand that the Soviet Union should pay in grain for Western supplies could have led to the further deficit in grain in the USSR," the economist underscored.

Starikov explained that having no other instruments to overthrow the undesirable Communist regime, Western political and financial elites planned to instigate the internal unrest through, in particular, the artificial deficit of food in the Soviet state. The need to use grain as a means of payment also bolstered Soviet collectivization, according to the economist.

In his book "Crisis: How is It Organized" ("Krizis: Kak Eto Delayetsya," 2009) Nikolai Starikov called attention to the fact that the West's "sanctions war" against the Soviet Union coincided with the Great Depression.

The embargo imposed on the USSR by Western governments dealt a severe blow to Western-Soviet trade. The economist emphasized that the move contradicted the best interests of Western producers, hit by the recession of the early 1930s.

© Sputnik
Holodomor Hoax: Joseph Stalin's Crime That Never Took Place
There is nothing new under the sun: while imposing anti-Russian economic sanctions in 2014, Western political elites have again completely ignored the interests of their own national manufacturers and businesses.

Starikov underscored that the Western embargo could have been just one of a plethora of factors which lie at the root of the devastating famine of 1932-33 in the USSR.

However, the famine could by no means be called a deliberate attempt of the Soviet leadership to starve its population in Ukraine, the Volga region, North Caucasus or Kazakhstan to death in 1932-33. Soviet collectivization also could not be regarded as a trigger for the famine.

"The famines of the 1920s, and especially that of 1928, were the background, the immediate context, for the rapid and, in part, forced collectivization of agriculture," Grover Furr told Sputnik commenting on the matter.

"This cycle of famines is crucial because it allows us to see that collectivization did NOT "cause" the famine of '32-'33. Famines occurred regularly. As Tauger proves, and as I mention in "Blood Lies," the famine of '32-'33 had environmental causes, just like all the others for 1,000 years," the professor stressed.

"The only way to stop this thousand-year cycle of famines was to modernize agriculture. This was the great triumph of collectivization – that it put an end to this cycle of famines," he underscored.

Professor Furr pointed out that both the proponents of the "Holodomor" concept and those who reject the "Holodomor" but blame the famine on collectivization, never talk about this cycle of famines, or of the famines of the 1920s.

"The famine of 1932-33 was the LAST famine! It really was an immense triumph, which is denied only because it was accomplished by communists and by socialism, not by capitalists and capitalism," Professor Furr added.

According to Nikolai Starikov, the problem of the 1932-33 famine has become a highly politicized issue. Juggling with the numbers of the famine victims some policymakers miss the point: in the first place the famine of 1932-33 was a tragedy for millions of Soviet people of various ethnic groups.

Was it ethically appropriate to use this tragedy to drive a wedge between Russians and Ukrainians during the Cold War era? What had the Western political elite done to prevent or minimize the disaster? And who benefits from labeling the tragedy as "Stalin's killer famine" today?