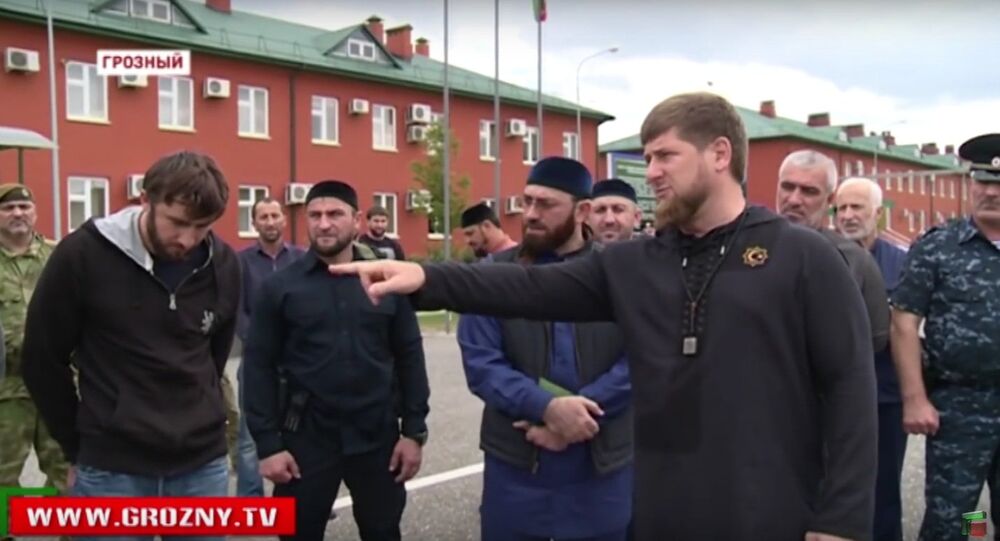 At the event, conducted earlier this week, Kadyrov faced down several young men, who he shamed for voicing their sympathies for the terror group on social media. The talk was attended by local Imams, the heads of municipalities, and the youths' parents; it was then broadcast on Chechen television.

Kadyrov emphasized that all of the "misguided" youth had respected and deeply religious parents, who sincerely condemned the actions of their sons.

Speaking at the event, parents noted that they had tried to raise their children to become pillars of support for their families, devout Muslims and worthy members of their communities and their country. They emphasized that they did not need sons "who betrayed family, relatives, friends, Islam and the Chechen people."

© Photo : YouTube/ChGTRK "Grozny"
Ramzan Kadyrov speaking at a televised 'shaming' of local youth who had voiced their support for ISIL.

Speaking to one of the youths, Kadyrov noted that young ISIL recruiters "look for infirm, weak-minded peers, agitating them to go to Syria. I will reiterate that in the Chechen Republic there is no place for those who would even look in the direction of ISIL."

© Sputnik / Said Tsarnaev
Chechnya Leader Kadyrov Believes ISIL Considers Him 'Enemy Number One'
The leader emphasized that "the most important thing is that relatives work closely with the clergy and with authorities. Upon observing suspicious behavior among their sons, they should immediately notify the police and the heads of the local administration. This allows us to prevent the worst consequences from occurring."

Kadyrov noted that the Wahhabi messages being peddled by ISIL supporters are "complete gibberish" which run counter to the tenets of Islam. He asked Imams to pay closer attention to their students, to help them to find answers to their questions in order to avoid the spread of Wahhabism in the Republic.

The leader had earlier emphasized that an effective information campaign to counter ISIL propaganda, together with community support serving as a safety net for wayward youth, was far more important than even the most successful of counterterror operations.

© AP Photo / Shakil Adil
Hoodwinked! Chechen Women Con ISIL Recruiters Out of Thousands of Dollars
In July, Kadyrov suggested that it was wrong to call ISIL militants the "Islamic State," since the group has nothing to do with the teachings of Islam. The leader warned that the fundamentalist group has been supporting militants in the Russian Northern Caucasus, sending money and specialists to train local militants.

In April, Russia's Federal Security Service warned that the North Caucasus-based Salafist group Imarat Kavkaz, which fought against Chechen and federal security forces for the republic's independence, had aligned itself with ISIL.

According to the Russian Interior Ministry, as many as 400 people from the Chechen Republic had left the region to join ISIL militants in Syria over the past year.